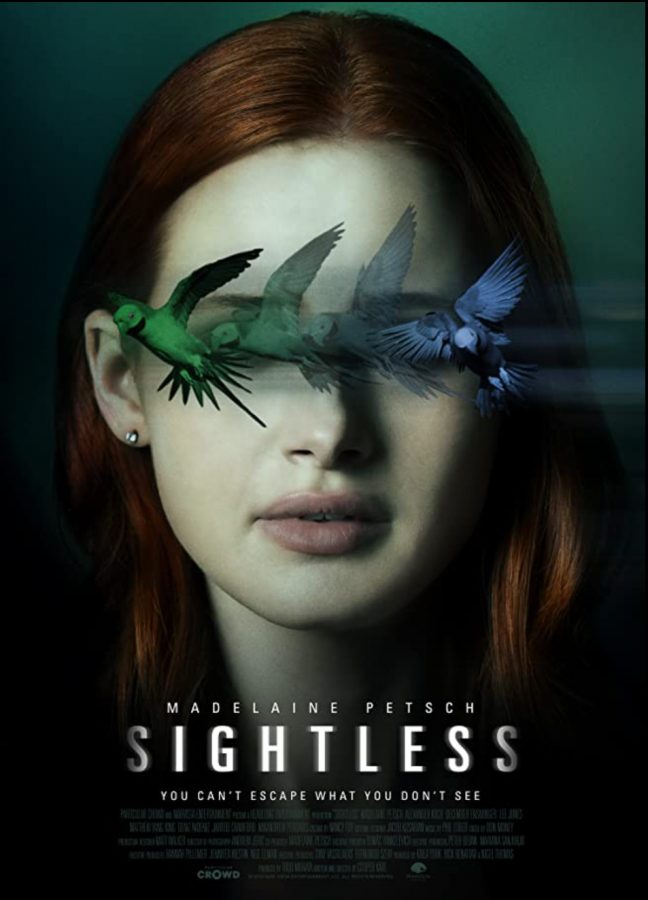 I am typically the first person to say no to a horror or thriller movie. Nevertheless, when scrolling through Netflix alone, I chose the psychological thriller Sightless. I may have only chosen it because it starred Madelaine Petsch, but I definitely do not regret my decision.

Sightless tells the story of Ellen Ashland (Madelaine Petsch), a victim of a recent assault that left her blind. The movie starts with a scene of Ellen in a monochromatic blue room about to jump off the balcony. It then quickly cuts to a scene of her in the hospital, one month earlier. After Ellen got checked on by nurse Omar (Deniz Akdeniz), Detective Bryce (Jarrod Crawford) entered her room to ask her a few questions as she slowly recovers.

One of the first questions he asks is if there was anything of value in her car. Ellen tells Detective Bryce that she just took her $500,000 dollar violin out of storage. Ellen used to be a world-renowned violinist who often brought audiences to tears with her beautiful songs. This was a long time ago though; Ellen has stepped out of the spotlight. Detective Bryce says the list of who attacked Ellen could be endless; after all, she was famous at one point in her life. Additionally, her ex-husband was an awful person with many enemies.

Ellen’s ex-husband used her to begin stealthy snatching from Ellen’s friends and family. Her ex-husband started to steal from Ellen’s long-time friend Sasha among other important people in Ellen’s life. Sasha was the only friend that stayed. This makes it curious that Sasha wasn’t picking up Ellen’s calls from her care facility.

At her facility, she is taken care of by a man named Clayton (Alexander Koch). Clayton and Ellen develop undeniable chemistry that is never acted upon. Ellen gets nightmares driven by paranoia that melt people from person to person, often including both Clayton and who Ellen thinks is her attacker.

In my mind, the colors in Ellen’s room reflect feelings and the tone of the story. In the opening scene, I saw blue and assumed it must represent the sadness of losing her sight. Yet a few minutes later, Clayton says the room is blue which is meant to soothe. This isn’t too out of the ordinary because blue can be seen as both a sad and comforting color.

Near the end of the film, the once blue apartment turns dark green. There are no longer many variations between the shades in the monochromatic color scheme—all the greens are the same. I believe this represents the confusion that Ellen is facing. The shade of green looks as if it is a Polaroid picture through a sea of murky water.

Although the frequent nightmares caught me off-guard and scared me, they did seem to have some meaning behind them. In most, Ellen sees her killer and ends up getting hurt trying to run away. Early on in Ellen’s recurring nightmare state, her eyes bleed onto her hands. This turns out to just be a leaky pipe in the ceiling but scares her nonetheless. She suffers from PTSD and paranoia. Ellen becomes convinced that her attacker is trying to terrorize her by hiding in plain sight.

I have never before been scared and captivated by a movie.

Overall, Sightless was a great watch. The symbolism of colors and frequent paranoia—along with a romantic twist—make for an interesting cocktail of a cinematic experience.