“Honeysuckle” brings a refreshing splash to the music industry 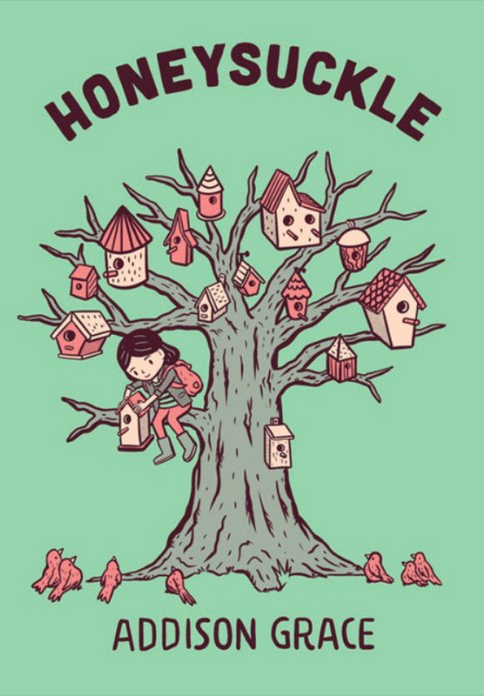 The cover of Addison's newest single

Since quarantine began, I have listened—and over-listened—to a large number of new songs. From rap to pop, I have listened to big-time artists who made their debut from all different decades.

However, I decided to zoom in and try out some tunes from budding musicians instead. The slower, acoustic beat of Addison Grace’s brand-new song “Honeysuckle” brought a much-needed change of pace to my bored ears.

Addison’s sweet voice takes a different path with a lighter, more airy, and flowing tune. The softness of her voice blends wonderfully with the main guitar accompaniment; most songs with a soft, light voice have electro-type music while acoustic music tends to have belting voices.

“Honeysuckle” has a calming, relaxing aroma about it. I can easily picture listening to it while laying on my bed watching the rain fall or hearing it over a speaker at a small mall store that sells warm, neutral-colored sweaters.

While the general aura is cozy, the emotion within the song is much deeper than the surface feeling. Addison’s voice brings in a whole bundle of life to it and does not feel at all like a single-layered single.

Lyrics aside, Addison writes a story with her tone alone. I can sense longing, admiration, glee, and relief all at once. The depth of the song places it far above top-chart songs and makes Addison a cut above the rest.

With lyrics factored in, Addison’s grade is boosted from an “A” to an “A-plus.” The 20-year-old has a way with metaphors and imagery like no other artist. She describes the love interest in her newest song as a “honeysuckle in the weeds.” This is not the only example as there are multiple other forms of symbolism throughout. In addition to this, her run-over sentences combine in a way that take me a moment to decipher while subconsciously understanding.

Within the lyrics, I could see that Addison doesn’t try to start any drama or complications. The words show how simply pleased she is to have their love interest with them. It’s unlike many other songs about relationships which are either dripping with sappiness or clumped with crudeness.

Although the tempo of the song is a slower-rolling beat, it doesn’t lose flow whatsoever. The river of the music runs smoothly at a steady pace while changing slightly and bringing new features. I appreciate both the originality and the avoidance of monotony.

I must applaud Addison for possessing something many well-known artists lack: variety. Even though Ariana Grande is an incredible and widely-loved singer, I find that most of her songs sound more or less the same. Of Addison’s three officially released songs, not one is remotely similar.

“Sugar Rush” is full of peppy excitement, “Overthink” brims with truthfulness and relatability, and “Honeysuckle” completes the trio with serene love.

Overall, I am not one for romantic songs. However, I could not stop myself from humming the sugary little tune. It may not be the most extravagant and legendary title, but it holds its own for originality and quality.

Since it defies the romantic norms, I am able to fully appreciate the small-artist single. Perhaps the song itself is a “honeysuckle in the weeds.”