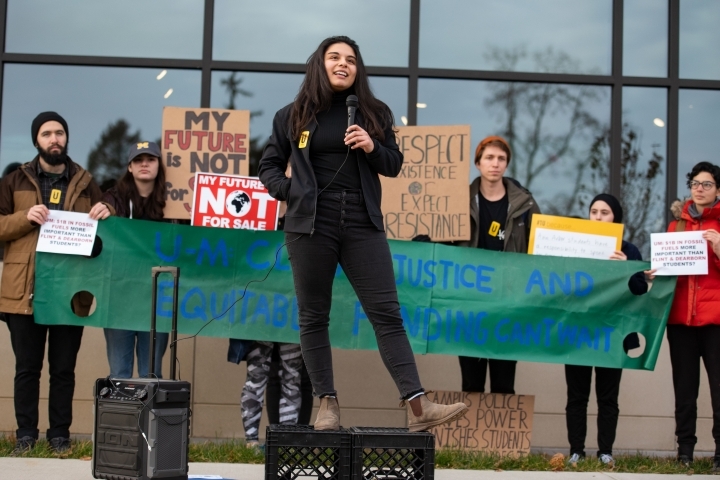 Keemya Esmael from the Michigan Daily

Amytess speaking at a protest that helped her get the scholarship

FHC alumna Amytess Girgis is making the journey across the ocean and moving to the United Kingdom next year.

As of right now, making this move of 3,726 miles will be difficult for her. Amytess is unprepared to leave behind the people closest to her.

“The relationships I’ve made throughout college have just been so instrumental in who I am today,” Amytess said. “You know, being an entire ocean and a five-hour time difference away from so many people I care about will probably be tough.”

Amytess isn’t moving for the fun of it. She will be attending the University of Oxford as a Rhodes Scholar.

Despite her not wanting to leave her current friends, she is excited for what is to come and the people she will meet in the UK.

“I am so excited to meet incredible people from around the world,” Amytess said, “both the 100 Rhodes scholars from around the world but also all the super cool people at Oxford University and in the UK generally; I think that I’ll gain a lot from those new relationships.”

Amytess was one of 32 students from the United States and 100 students worldwide who received the Rhodes Scholarship—a full ride to Oxford for the program of the recipients choice—for next year.

The scholarship was brought to her attention by Henry Dyson, the scholarships and fellowships coordinator at the University of Michigan—her current school. Amytess went to work on her application and ended up receiving the scholarship.

Currently, Amytess is studying at the University of Michigan where she will graduate with her Bachelor’s degree in Political Science and minors in Urban Studies and Anthropology this May.

“I’ve really loved my time at the University of Michigan,” Amytess said. “You know, Michigan has everything you would need from a college experience. It’s such a large university that I’ve just had so many opportunities here, and so many people have helped me along the way. I’m really glad that I came here.”

At Oxford, she will be furthering her political education and will be obtaining a Master’s degree in Philosophy and Comparative Politics. After Oxford, although she isn’t certain yet, she is looking at applying to law schools.

As an avid protester and rights supporter, Amytess wants to be able to help people in a way that goes beyond the protests.

“I’m just interested in understanding the ways that the American legal system shapes, or rather [restrains], social movements,” Amytess said, “and I want to understand how certain laws came to be that do and do not promote social movements that actually can create lasting change, so I’m interested in seeing the structure of the law in that way, but a law degree might not be the best way to do that, so we’ll see.”

Everything that Amytess has done and will accomplish in the future has had the backbone of a great support system: her parents.

“Both of my parents have been huge inspirations to me in different ways,” Amytess said. “My mom taught me how to analyze things critically and think for myself and stand up for my ideas, and my dad taught me a lot about the importance of consistency and working on something day in and day out without fail.”

Amytess believes that, just like her parents, her time at FHC helped shape her and lead her to Oxford.

“Forest Hills Central is just such a good public school,” Amytess said. “My teachers were so incredibly helpful in helping me think critically and analyze and also just gave me the support and confidence I needed to believe I was capable of doing good things.”