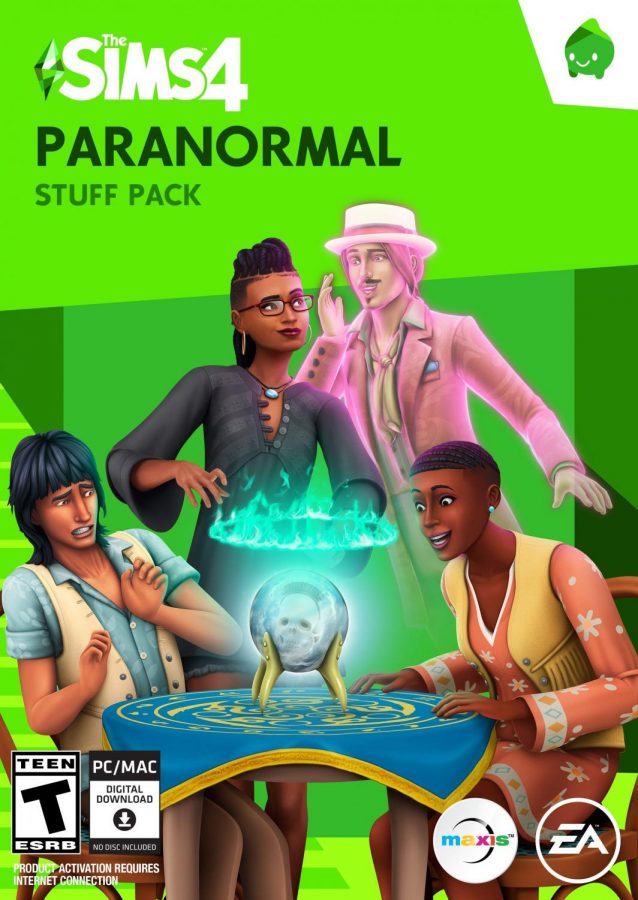 The cover art for the newest pack, The Sims 4 Paranormal Stuff.

The first time I was ever left alone with a Sim, I accidentally starved her to death.

In a bout of curiosity harbored by my sister leaving the room, I can vividly recollect sliding the hunger bar all the way down just for kicks and giggles. And in a shocking turn of events, the Grim Reaper materialized suddenly in my Sim’s simulated bathroom to banish her to the afterlife.

For someone who has never played any Sims game, these hijinks may come off as slightly strange. However, anyone who has traversed this wacky and magnificent game would understand that nearly anything is possible in The Sims. From the alien-related disappearance of Bella Goth back in The Sims 2 to the innumerable pool ladder-related deaths I and many others have inflicted on our Sims, there is something about the simulation that truly offers up endless potential.

And while The Sims 3 will always hold my heart, the newest and most progressed game—The Sims 4— certainly fits the innovative aspects that many other games in this franchise have provided. However, after the release of a not-so-successful Star Wars-themed pack late last year, the team over at EA was searching for success within the downloadable content side of The Sims.

This is when the newest stuff pack, The Sims 4 Paranormal, comes into play. The addition was announced on January 12, bringing with it some exciting new features such as seances, specters, spooky haunts, and a cameo from Sims veterans’ favorite skeletal maid, Bonehilda.

The Sims 4 Paranormal resulted from some community surveys that rolled out during 2020, allowing players to vote on what they wished to see next from their beloved game. While I did not personally vote for a haunted pack such as this one, I would say that I was pleasantly surprised by the content within this extension.

Starting in Create a Sim (CAS), this pack’s wardrobe is shockingly adorable. The women’s clothing options read as very 1970s, including flowy blouses, flashy floral prints, and timely fringe vests. Straying away from the beaten path, the men’s clothing mixes this 70s flare with a sort of 1920s elegance that resonates with the theme of the game. On top of this, some chic new hairstyles genuinely embody the eerily exquisite vibe.

Melding with and moving away from this theme, the new Build/Buy items may be some of my favorites to enter the game in quite a while. From hanging plants to trendy sofas and chilling seance tables, the general aesthetic is very much “the creepy old house that your Boho-Chic grandmother left you in her will”—which also happened to be the back story I had written for my Sim. The entire Sims community’s consensus was that the combination of vintage prints and those more simplistic ones is precisely what we’ve been looking for in this faction.

Something that greatly surprised me with this game’s rollout was the creation of a new job path: the Paranormal Investigator career. With stuff packs costing the least and usually including minimal gameplay, this entire addition genuinely pleased me.

Without spoiling anything about the gameplay features, there is a lot to be played around with. On the first night in the new Haunted House lot type, specters will visit, some friendly and others not so much. Consider appeasing those new friends with handmade gifts; I had my Sim level up her knitting skill to present them with tiny Grim Reaper toys.

There is also a new possibility of gaining the Medium skill, while it only maxes out at five skill points instead of the usual ten. Through this skill, the sim can contact the afterlife, reduce the spirituality of their home, or even bring ghosts back and ask them about being dead.

Overall, The Sims 4 Paranormal did a fantastic job of satisfying the community’s wishes, managing at the same time to pack a punch with such a small amount to work with. Lovers of occult gameplay with ten dollars to spare should definitely consider checking out this game.