Amelia DiBenedetto may only take photos for herself, but she has a talent that no one can ignore 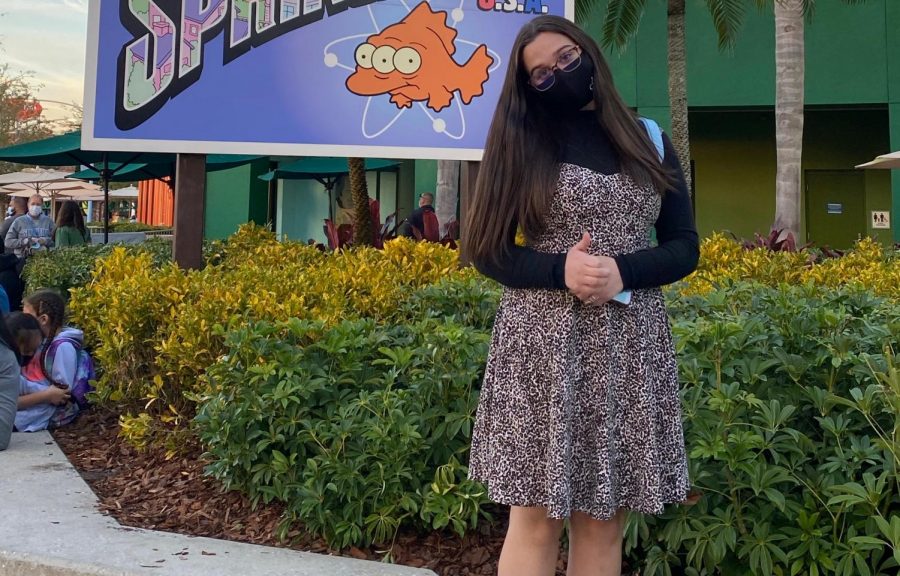 Standing on the driveway, freshman Amelia DiBenedetto finds herself taking a picture of nature in the snowy abyss of Michigan in the wintertime. There’s a light blanket of snow covering the ground and just the right pop of color for the perfect, intricate photo that Amelia has been chasing after.

Amelia’s passion for capturing moments in time came from walking into a photography class in middle school, a class she didn’t know she was going to fall in love with.

“There were some people [in the class] that couldn’t take better quality photos,” Amelia said, “but compared to mine, my photos looked more experienced [than theirs]. I felt like I was more pushed to feel like I wanted to get the best photo—most of the time I strive to get the best photo I can get.”

Amelia instantly got astounding grades in the class and impressed her classmates with her use of lighting, angles, and her unique choice of subjects. Amelia obviously had a knack for freezing time with the shutter of her camera, but she didn’t know that this new-found talent would eventually set her apart from other students her age.

“I put one [of my photos] into a contest,” Amelia explained. “I actually won first place in the photography section. The photo that I submitted I didn’t like that much, but I had it printed out from the art show [for school], so I didn’t think it was that special of a photo; I didn’t have high hopes.”

Amelia wasn’t one-hundred percent confident with her abilities so it made her win even grander. After finding out that she had won, Amelia quickly realized that photography was her calling.

“I felt a lot better about myself and my photography skills [after winning],” Amelia explained. “[The contest] really opened my eyes to my passion; it was ‘the call’ to me.”

Amelia was startled about how briskly she took up the art of taking photos; she had entered that contest only a couple of months after she had started taking the class, and she was already winning first place. Although her immediate talent was rather unexpected for Amelia, her mom saw her skill early on.

“My mom sees all my photos,” Amelia said. “My mom is definitely my biggest supporter; she’s also in love with taking photos so she encourages me. She definitely pushed me to do the class, to begin with, then she pushed me to put my photo in the content—she wanted me to have a passion for photography.”

With her mom being her most prominent sponsor, she also had her friends in class telling Amelia their honest evaluations of her photos. Sometimes the brutal honesty could possibly seem like the comments were out of envy, but Amelia knew her friends’ hearts: they only wanted to encourage her to get better.

Since beginning her photography class a few years ago, Amelia has vastly advanced and she can’t wait for her skills to become more immeasurable. Since she commenced, she’s only had her phone camera to seize moments; while her phone can still work miracles, Amelia thinks it’s time to finally get the correct equipment.

“I don’t have the best camera [for taking photos],” Amelia said. “I have to use my phone; the quality still works so it isn’t too bad. [I want] more of a sophisticated photography camera that professionals have—I feel like that’s something that I really want.”

Getting higher-powered gear would make Amelia’s practice more enjoyable and would most likely propel her to work on the little things that she could approve upon. Although Amelia gets better and better with time, there are shortcomings in her photos that she wishes she could erase.

“[I strive for] sufficient lighting, good angles, with clear and focused points to make an ideal photo,” Amelia explained. “I think practicing and taking more photos will make me more skilled—practice makes perfect.”

While quarantine prevented a lot of people from pursuing their passions, Amelia discovered herself restless; photography was an outlet from everything in the world. Over quarantine, Amelia got to focus on perfecting her skills and started to realize this could be in her future as well.

Amelia isn’t remarkably confident in her pictures quite yet, but with a lot of discipline and her passion staying an untamable flame, Amelia will eventually put herself and her creations out into the world for others to view.

“I haven’t thought about posting my photos for people to see now,” Amelia explained, “but I have considered a possible career in photography like a wedding or travel photographer. I would probably [start chasing these goals] after college so I have the time to get into it—if it’s a possible career it will take off.”

There’s a lot in store for Amelia’s destiny in photography, and it’s apparent that her career will take off quite promptly, but as of right now, there are still some slight details she needs to work on. With new seasons arising, Amelia will be able to capture a more voluminous diversity in nature. In these upcoming periods, the flowers are budding and developing, but so is Amelia through her photos.

“Flowers are blooming, there’s sunlight, there’s rain,” Amelia said, “there are multiple weather types to capture. Photography is just a fun thing for me to do—I like the calmness of it because it’s not too crazy of an activity. It also captures moments which I really like doing—living in the moment—having a picture helps people to remember certain times.”