The ticket to togetherness 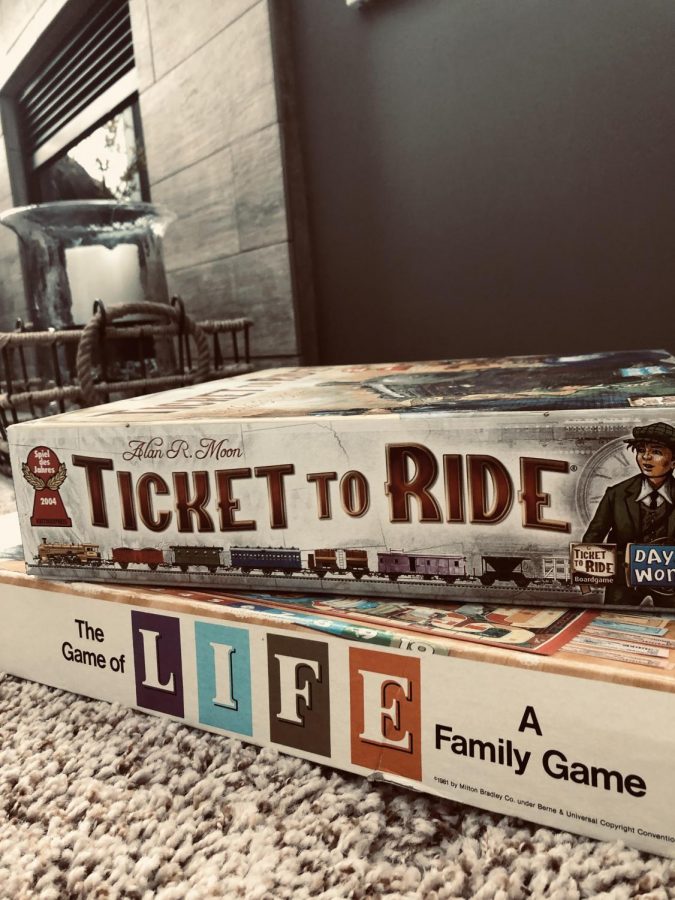 A stack of games that are a favorite among many

Friends gather around to play a night full of fun games with difficulty levels ranging from Monopoly to Machi Koro.

New York Seltzer sodas in a variety of flavors get passed around the table. Cream soda goes to the guy on the left, a girl on the right claims the root beer, and black cherry ends up in front of the other player on the end of the table.

With the fizzing drinks in hand and strategies brewing in their minds, the players are ready to begin the games.

Different games pose different levels of competition of course, and there is no telling to what extent a player might go to in order to achieve their moment in the sun in a classic game of Ticket to Ride.

Ticket to Ride isn’t necessarily a classic, yet it’s been included in the game night repertoire for many moons.

Root Beer Soda Girl lays down her cards to claim the first rail track on her quest to finish her train route. The other players eye her decision and act accordingly.

As the game progresses, Cream Soda Guy lays the last of his cards on the table to declare the route from Miami to Atlanta, using up almost the rest of his trains.

As the rules go, this play essentially ends the game due to the lack of train cars left over. Black Cherry Soda Guy glares at Cream Soda Guy with real disgust and begrudgingly glances at his unfinished routes; this will cost him a lot of points.

As the points are counted up, Root Beer Soda Girl, being the good sport she is, high fives Cream Soda Guy for his brilliant gameplay. Black Cherry Soda Guy glimpses at the scoreboard in frustration—he was only three points from winning.

By now, the fizz has depleted in the sodas, and the drinks are close to being finished. This signals that it is time for the next competition. Though much more friendly than the first game, The Game of Life introduces a new kind of engagement.

The Black Cherry Soda Guy is determined to earn the most money in this game to avenge himself. Besides, that goal should be easy to achieve because the other players favor the game for distinctive reasons.

While Black Cherry Soda Guy aspires to become a billionaire and end up in the mansion at the end of the game, Root Beer Soda Girl likes the real-life aspects of it—the more kids, houses, and cars, the better.

But as all Game of Life rounds seem to go, they often don’t achieve what they’re going for.

Starting out strong, the Black Cherry Soda Guy is the wealthiest; he remains so until a tornado strikes his house, forcing him to pay a preposterous amount of cash to make up for the damages. As anyone could imagine, he is not too enthusiastic about this.

Also getting a head start on her goal, Root Beer Soda Girl manages to land on the first possible baby square. However, even with taking the family path in The Game of Life, there were no more children slots presented to her after that one. Though, she did acquire two houses—one beach house in the Bahamas and the other was a studio apartment overlooking the city.

The Cream Soda Guy was feeling pretty good about his win in the last game, so he decided to take it easier than the other two who were battling for their positions. After landing a career as a brain surgeon, he decided to make education and work his top priority to accomplish and level up throughout the game.

In the end, the Cream Soda Guy achieved very high honors for his education and work, the Black Cherry Soda Guy ended up with 5 children, and the Root Beer Soda Girl was the overall winner, scoring just above 9 million dollars from her life experience.

Irony was on their side for that game.

Game night may bring out some inner monsters from these three, but it doesn’t matter. They all had an enjoyable time, went home smiling, and will, in the end, forget the overall score subsequently.