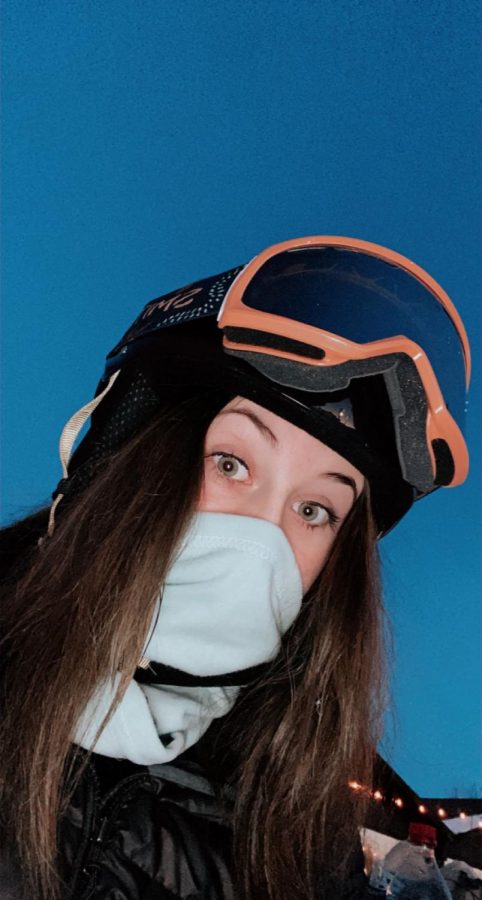 Skiing was never an interest of mine until I met my boyfriend, Luke. The idea of skiing never came to mind. There isn’t a reason why I didn’t want to attempt skiing. I was told by friends that when you first learn to ski, you fall a lot, but the contemplation of falling didn’t strike me one bit. It was just that hearing about my friends going skiing and knowing that my mom grew up doing it never interested me. It seemed as if the thought flew past my mind.

After meeting Luke, I discovered that there was so much more to skiing. This is when it struck my attention most. I’ve heard about, and learned a lot, from him by talking about his practices, going to races, and most importantly just talking about how to ski. From this, I got the courage to try skiing for the first time because I was mostly jealous of other people knowing how to ski and I didn’t. I felt like a winter-hobby outsider.

When I finally got the chance to go, I had to go shopping for the items I needed. I tried on new pink snow pants—which were cute compared to the black ones I already had—and they fit perfectly. I also got some new gloves, some leggings, and a shirt for underneath my coat. I also purchased ski goggles and, of course, brought a mask. Since I’m not a professional skier—yet, and if we are being honest, probably never will be—I didn’t buy skis. I decided to rent them at Cannonsburg instead, along with a helmet and ski poles.

When the time came to head to Cannonsburg, I put all of my gear on and headed out the door to hop into my friend’s car which was waiting for me in our driveway. Two of my best friends, Maya and Allison, were going to be my “coaches” on a rather interesting night of skiing.

Shortly after getting everything I needed, I headed to the hill where I would be learning. Needless to say, I wouldn’t be skiing on the bigger hill; I would be learning on what they call the “bunny hill.” This embarrassed me because it was hard to watch all of the younger kids skiing better than I was. They were going down the hill perfectly each time with no help. Meanwhile, I was all over the place, and I did indeed fall a lot.

It wasn’t the falling part that was embarrassing or scary, it was getting up. This is when I realized that I have the knees of an old man. When I fell over, I convinced myself that I could not get back up again—which was partly true. It’s rather difficult to get back up with skis attached to your feet. I tried and tried until I finally gave up and my friend had to help me, but once I got the hang of it, I could get up without Maya’s help. Another part of skiing that was hard for me was turning. I was so frustrated because I couldn’t seem to get myself to turn the way I wanted to go. It was hard to position myself, and the skis, to make wide turns on the hill. I kept practicing my turns until I improved a bit.

Time passed, and I was about done. I was tired and my body hurt from falling numerous times. Skiing for the first time helped me realize that it is not easy. Watching skiers turn around each gate reminds me of how hard it was for me to turn my first time. It made me understand that it takes a lot of work, practice, and time to become decent at it. When I watch Luke or other people that race, I now notice that what they are doing takes a lot more than just a cool-looking outfit and some rental gear.