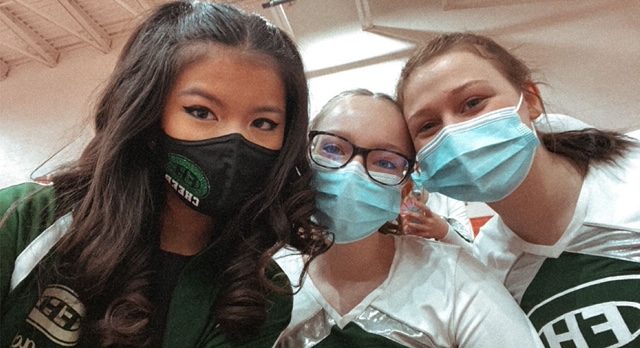 Peyton Smith with a couple of her teammates on the competitive cheer team.

Despite excelling as a competitive cheerleader, junior Peyton Smith is unable to pursue her passion this year at FHC.

Rather than not participating at all in cheerleading this season because of the restraints on her athletic life, Peyton is doing her best to remain part of the team no matter where her role may be.

“It’s really weird not being able to compete,” said Peyton, who has been cheering since her freshman sideline season. “Since I transferred, I cannot compete because of the transfer rule. It’s interesting seeing how things actually work. Since I cannot compete, my coaches treat me as a sort of student manager for the team. I get to [see] a lot more of the coaching aspect [of cheer]. It’s very interesting to see what goes [in the] coaches’ minds; it was way more work than I thought.”

MHSAA transfer rules state that any student switching schools are not eligible for the next season of a sport they participated in at their former high school during their most recent previous year. Certain students can bypass this rule if their reason for switching schools is one of the listed exceptions in the rules. Most of these rules involve moving to a new house in a new area. Peyton switched at the beginning of the first semester this year from Forest Hills Eastern. Even though she remained within the district, Peyton does not meet the exemption requirements.

And as Peyton is somewhat new to cheer, participating as a coach is even more unusual for her than it may seem. The constant tugging between two identities on the team leaves her confused and dispirited.

“It’s different,” Peyton said. “Especially as a borderline teammate and coach, I can’t really [say], ‘we have to go and do this now’; [Instead], I have to sit back and go off of what [the] coaches are doing. I can’t take initiative like I could if I was an assistant coach or a head coach. It’s just really different to not always be participating [and] being able to almost coach other people. It’s definitely not what I’m used to.”

Being behind the scenes and not competing has frustrated Peyton. She is only able to practice certain things—once it gets to the main part of the practice, she’s back on the sideline. Peyton, a gymnast for over ten years, thrives as a tumbler, which makes not practicing hard for her.

“During practice, I participate through all of the warm-up and for basically any team things we do,” Peyton said. “If we do team jumps, I’ll do team jumps. When we start moving into individual rounds, I usually sit with the coaches, and I give critiques and help out with underclassmen who aren’t in the round.”

On any team, bonds between teammates are made and lasting friendships are formed. Despite being a borderline teammate and having difficulties in creating friends on a team, Peyton continues to try and fit in to being a normal teammate.

“A lot of the bonds on our team specifically come from in-school friend groups,” Peyton said. “Because I’m new this year, it’s really just talking to others, being nice, and helping people learn new material and new skills [that I do]. [That’s what has] helped me become friends with some of the underclassmen, specifically. I’ve known most of [the upperclassmen] for a while, but [making bonds] is really just talking and being nice.”