Tom and Jerry: The Movie took me down memory lane 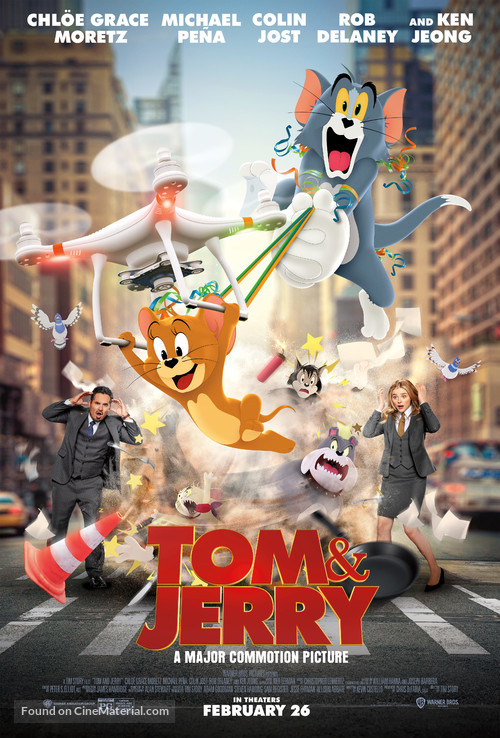 The movie poster of Tom and Jerry: The Movie featuring some of the cast

Growing up, I’d often find myself perched in front of my tv after eating lunch. Tom and Jerry was an after-lunch favorite; I loved seeing Jerry the mouse scamper across the screen with Tom the cat chasing him with something like a flamethrower.

This movie used CGI (Computer Generated Images) to create the animal characters like Tom and Jerry. Usually, this would create a weird contrast between the live-action scenes and CGI features, but I actually felt that the CGI complemented the live-action really well and was able to bring back some of the original cartoon-feel into the 2021 movie.

I was also incredibly pleased that they continued to make Tom and Jerry non-talking characters just as they had been in the original cartoon. The type of mute communication between them was just too iconic to ruin, and I think that the use of CGI made their expressions and movements believable yet cartoonish—perfect for this style of revamping.

Though the movie’s plot did not directly revolve around Tom and Jerry, it did a good job at reliving some of their tricks and schemes against each other.

Kayla (Chloë Grace Moretz), a struggling young girl who deviously makes her way into getting a job at a prestigious hotel, is now left to prove herself as the event planner.

Unsurprisingly, the hotel manager, Mr. DuBros (Rob Delaney), expects every detail to be perfect for the top-notch celebrities—Ben and Preeta—who are having their wedding at the hotel. However, Jerry finds himself spotted in his hotel mousehole by Kayla. She can’t let a mouse stay in the hotel as it could cost her her job. Then, Tom’s dream comes true: Kayla recruits him to catch Jerry and make sure he gets as far away from the hotel as possible.

As any Tom and Jerry episode would go, the pair continue to outsmart each other. Even though Tom and Jerry weren’t the most central characters in the movie, it clearly was a continued story of their never-ending rivalry, which I loved reliving.

I thoroughly loved every aspect of this fast-paced story. It was genuinely clever and funny; my family and I found ourselves chuckling at the little lines they snuck into the script that contained notable humor.

This element was also what helped make Tom and Jerry seem like their original trickster selves again.

Also, I was very impressed with the soundtrack of the movie. At times, there were no songs with lyrics but just upbeat sounds meant to fill the silence. One song that was used multiple times in the movie was “Can I Kick It?” by A Tribe Called Quest featuring Busta Rhymes, and it was one that could easily immerse you into the scene.

Since the story was set in the city of New York, I thought the song was very fitting to the atmosphere—loud, busy, and a little chaotic.

I was honestly surprised to hear that the movie got some negative feedback. Sure, the plot was predictable, but I guess I wasn’t watching it for the suspense. I was just looking forward to seeing the humorous Tom and Jerry ridiculously fighting once again but in a new movie.