I need more feminist characters like the ones in Moxie! to survive 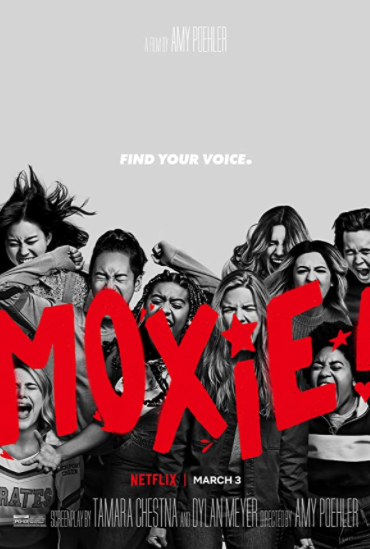 Strong female characters are something society has lacked and ignored in the past. Moxie! refuses for this norm to be accepted and I could not love it more. My Snapchat ads must have known how greatly I needed the feminist motivation before it even came out.

Moxie! follows the story of high school junior Vivian Carter (Hadley Robinson) who is incredibly shy. In her English class, Vivian meets Lucy Hernandez (Alycia Pascual-Pena), a fiery feminist with the goal of changing societal standards. Vivian becomes inspired by Lucy standing up to their teacher for only assigning books written by old white men. Vivian then finds a suitcase of high school protesting memories owned by her mom Lisa (Amy Poehler).

Upon finding booklets on feminism and protesting unjust school rules, Vivian becomes inspired. After demeaning “rankings” at her school are released during an assembly, Vivian’s rage falls over the edge. She writes her very own pro-feminist booklet called Moxie after she hears her sexist principal using the word. Vivian distributes the booklets throughout the bathrooms in the school, and soon, the booklets are everywhere.

In support of Moxie, a peaceful protest of hearts and stars drawn on hands forms. Doubtful that her protest idea worked, Vivian attempts to wash off the sharpie drawings when she runs into two fellow students. These students are Amaya (Anjelika Washington) and Kiera (Sydney Park), two members of the undefeated girl’s soccer team. Amaya and Kiera have stars and hearts on their hands, which Vivian notices. When she asks Kiera and Amaya why they say it’s because they always win and the boy’s football team never does, yet they get new uniforms and tons of funding.

Soon, with the help of Amaya, Kiera, Lucy, and several other girls facing inequality, a club called Moxie forms with Vivian at the helm, although no one knows it. Vivian chose to remain anonymous as the author of the Moxie booklets.

In the end, Moxie! shows the typical boy and best friend drama of most coming-of-age movies but also tackles big topics like sexism and racism in schools.

What particularly made me love this movie is the fact that it included several strong female leads. I feel like when I was growing up I didn’t see many outspoken girls on television screens. The closest thing I had was probably Disney’s character Rapunzel, and although she may have been feisty, she is far from any characters featured in Moxie!

Although I may have a slight bias, Kiera has to be another one of my favorite characters in addition to Lucy. Not just because she has the exact same name as me—which is something I have never seen before—but she is a strong athletic high schooler who is done with misogynistic rules and norms. I feel reminded of myself and who I want to be.

In total, Moxie! deserves to forever be trending on Netflix due to its headstrong feminist approach to tackling injustice found in schools across the country.