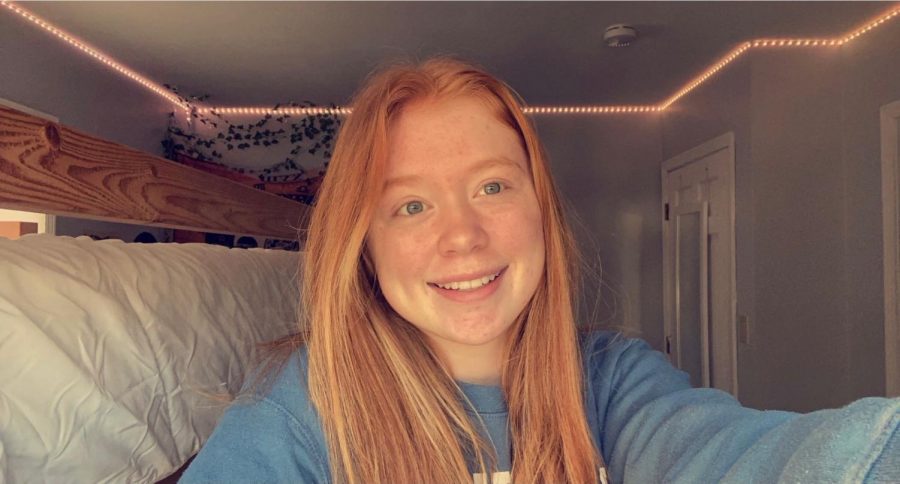 Sophomore Allison Kelly has described her newfound hobby, gymnastics, as simple as the definition can get: an activity that one loves to do.

Just like a lot of girls when they were little, young Allison would search up tutorials on YouTube of different gymnastics skills and tricks to try and master by herself. Back then, gymnastics to her meant the fun cartwheels and backbends rather than the mental mind trick the sport can play on athletes.

This past year, Allison has discovered that she enjoys playing the high-intensity sport of gymnastics. She decided to join the gymnastics team at FHC to take her hobby up to the next level.

“It’s something new,” Allison said. “I’m doing it with one of my friends, [freshman] Lily Zorn. She’s new too, so we’re both doing it together.”

Besides the YouTube tutorials and the little experience she had as a child with the sport, this new side of gymnastics has remained unknown up until now.

Trying something new is scary, especially with how intense gymnastics is. One wrong foot or hand movement and there goes the routine. Gymnastics requires a lot of coordination and agility, along with flexibility and endurance. The sport is not a joke and isn’t for the weak. Having Lily next to Allison’s side in the gym gives her a huge sigh of relief.

“I feel like if I was doing it just by myself,” Allison started, “it would be a lot [scarier] and nerve-wracking only because I am new.”

The FHC Girls Gymnastics Team practices at Grand Rapids Gymnastics and travels to different high schools and competes. Despite it being Allison’s first year on the team and competing, she thinks positively about her fellow teammates and the coaches.

“It’s really fun actually,” Allison said. “It would be a lot more stressful if I competed at every meet, obviously. But it’s really fun and all the girls are so nice and welcoming, even though I am not good at gymnastics.”

Throughout this new time in Allison’s life, she has a supportive team and understanding coaches, thankfully. Allison’s coaches have been guiding her throughout this season and giving her that extra push to reach her simple goal: to become better.

“The coaches [are] really nice to the new people at gymnastics,” Allison said. “She’s super encouraging even though, [in my opinion], I’m not that good [yet].”

Winter sports for the 2020-21 school year are coming to a slow and sad end. Soon enough, all of the winter sports will be wrapped up just in time for spring sports to take their place. That means the gymnastics season and many others will be ending within the next week or two. Allison has planned to be participating on the FHC Track and Field team this spring.

The two sports are nothing like each other. For that reason, this has challenged Allison all season. The one sport that she primarily played during the school year was track and field. Allison learned this year to step out of her comfort zone and explore more than what track and field has to offer.

“I want to have fun [with gymnastics],” Allison said. “It helps me stay in shape in the off-season, and it’s also just a learning experience.”