Joe Clancy lives high school through the lens of his camera 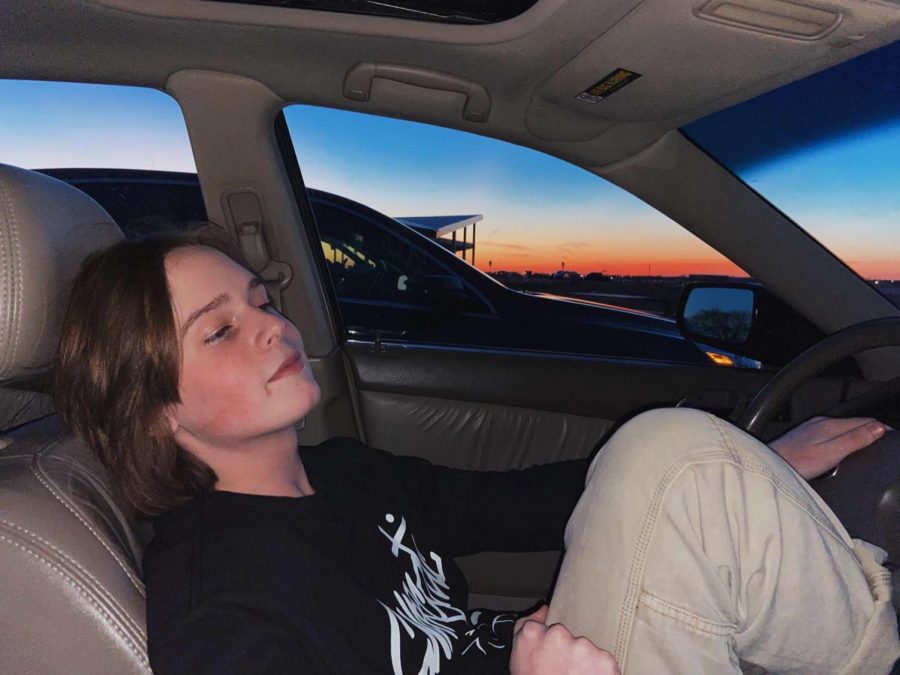 Joe chilling in his car as the sun sets

Senior Joe Clancy has accomplished something that very few students have done before at FHC. Though it wasn’t something death-defying or inherently dangerous, it did take a lot of endurance and skill.

“[Seniors] Ian Stewart, Sydney Kushak and I are all three-year FX students,” Joe said. “I think there’s only been like two or three [students] before us that have taken three years of FX in a row.”

Their investment in the class was not the only trait desired by Manders for this unique opportunity.

“Manders looked for commitment to the projects, [and characteristics] like staying late to edit, always being there, and showing up on time,” Joe said.

This dedication to not only the class but the overall subject as well has granted Joe—along with the other two seniors—the opportunity to do special media projects for select teachers during an independent study hour.

Even at a very young age, Joe became attached to all things film and editing.

“My aunt gave me a camera probably six or seven years ago,” Joe said, “and ever since then, I’ve been in love with it.”

Joe has carried this fondness of film with him all through high school.

During this media-centered independent study, Joe either does special film projects for teachers or spends time putting together and editing the senior video.

“This year, with everything being online, we definitely had a lot more [film projects for teachers],” Joe said. “[Teacher Robin] Demeester asked me to make [an] open house video for her. [Also], in [American Sign Language] every year they do this thing where they go down to the children’s hospital, and they tell stories [by signing the words and letters to the children] there. But since [the classes] couldn’t go this year, I recorded a video for them to do that.”

This year, due to the obvious restraints with being able to capture key high school moments, it has been hard for the students to collect footage for the video.

Joe and his fellow film partners have been trying to find ways to capture the seniors’ year despite the limited amount of time being enrolled in school and sports.

“We’ve been trying to figure out [how to make up for the lost footage] for a couple of months now,” Joe said. “We’ve brainstormed going to some out-of-school events where people might be and getting some footage of them. We usually don’t do classroom footage, but we’re trying to do some this year to get as many seniors [included in the video] as we can.”

All of these projects and filming activities are right up Joe’s alley. However, this is not the end of Joe’s talents. When he’s not out getting content for videos, you can find Joe in the side room of Manders’ classroom possibly editing a series of clips into a masterpiece.

“I really enjoy filming,” Joe said. “[It’s] really fun, but the editing is just as fun to me.”

The senior video along with all the other projects is quite a bit of work, but Joe enjoys every minute of it. Sometimes, as Joe has learned, you just have to trust the process.

“There’s probably about 20 gigabytes of footage [on Manders’ computer for editing videos],” Joe said. “[We’re working on making] a fall section, a winter section, and a spring section. [Then, we] pick and pull [the videos apart to find] what we want to put [in the video] from each of those sections including sports, kids in the halls, and stuff like that.”

Joe’s talents have taken him far in the realm of film and editing, and he hopes that other students will be able to accomplish a full four years of Media Communications classes as well.

“Film Projects is definitely a class you should take if you enjoy being creative, and you enjoy using technology for filming and things like that,” Joe said.