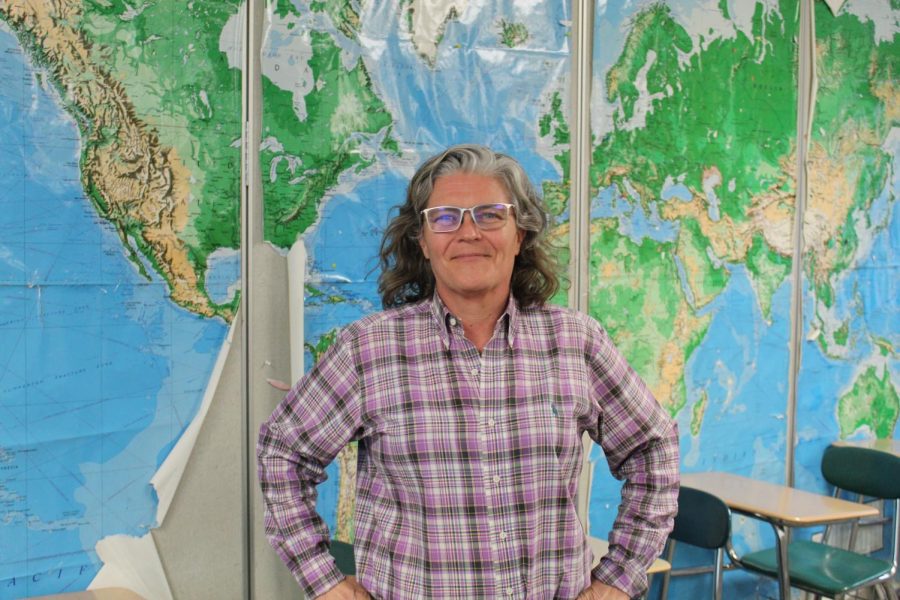 Laura Stiles has been a teacher at FHC for 26 years

“I think that the assembly we pulled off—the Winterfest assembly? I wrote that sucker. I worked on that thing for a month. I think the two assemblies [this year]—I know they weren’t much, but to try to pull something like that off and still have some spirit and still have people being a little bit excited about it . . . And this is the first time orchestra has ever been asked to be in any assembly ever for anything. My goal was to try to get as many performers into that assembly as possible so they could at least have a little something this year. So I think those two assemblies just about killed me. But I think in the end, though I was still sad about the mess of the year, it was like, ‘Ah, at least we got something.’ I love that stuff. I love those assemblies . . . but this year it was incredibly difficult . . .”

“You know what’s funny? I was just showing my pictures from Japan . . . I went there for a month; it was a teacher exchange. I went there and stayed with a teacher [and her] family, and then my teacher from Japan came here to stay with me and my family. I went to school with her, and she went to school with me, and we [did] the whole thing. And that was one of the first things I ever did that was kind of out there like that. I was a new teacher; I wasn’t married; I didn’t have kids . . . and [the principal] called me in the summer and [asked], ‘You want to go to Japan for Kent County?’ I’m like, ‘Yes.’ And I don’t think I had to pay anything—just spending money. So that was probably one of the biggest, coolest things I’ve ever done. Building my own log house—that was another one. It was a pain to teach when I was doing it. I would come to school with mud to [my knees], and then I’d have a clean shirt on and my work boots. [I’d] smell like pine. Then I’d fly out of here at the end of the day to go meet an inspector or whatever.”

“Kathy Westdorp—she was the principal that was here when I got hired. She’s the kind of person that says jump and you literally say how high. And she just led by example. She would literally make us teach bell to bell. The bell rings at the start, you’re teaching. The bell rings at the end, you stop. No kids screwing around. She was a butt-kicker. And I played softball [with her] on a softball team with a bunch of women, and we won every league, every tournament . . . and we played for [a] bar downtown. [Kathy Westdorp] was also a teacher and a coach, so she just picked all her friends that were really good top athletes, and we just were awesome.  [Also] Pat Hartsoe . . . she’s legendary. She was my sixth-grade gym teacher and middle school gym teacher. She’s one reason I became a teacher.”

“Probably just encouraging, [saying] there’s nothing you can’t do. I would hope that you feel that way after being in my class. My whole life, I played hockey with the guys. And so it wasn’t even about being a girl or a boy to me; it was just about playing hockey. I didn’t go into the rink or locker room thinking, ‘Oh, I’m a girl.’ No, I just went in there, like ‘Get out of my way. I got a job to do.’ And I try to treat kids like that too. I don’t care if you’re a boy or a girl, or black or white, or big or small. I never really thought about much of that until the last few years . . . It just messes me up because then I’m afraid I’m doing something wrong or I’m saying it wrong. I never really thought about how I’m supposed to say some of this stuff. You can do anything you want, anybody can; you just [have to] find the right people to get around you to get it done. I don’t think there’s one thing other than just do what you want to do. Don’t let anything stand in your way.”

“Good job. Keep going. I think I’d be good with me. I think I’d be proud of [myself.] I’ve done the best I can here. I try to make all kids feel good about being here, whether they like it or not. I try to get all kids to like history even a little bit because most people don’t like it at all. I think most people walk out of my room knowing a little bit about history. So, I think I would be okay with myself.”

“Men. I know more about hockey than just about anybody in this town. I coached for 20 years, played my whole life, coached the boys’ JV team here for [about] 10 years. In all my hockey experiences, I never was discriminated against until 10 years ago.”