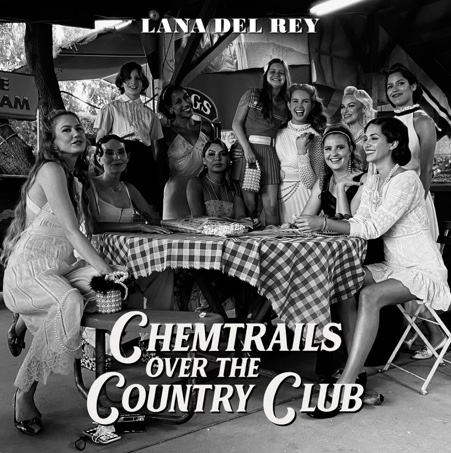 I have never considered myself a true fan of Del Rey since I have only listened to a bijou selection of her music. While wanting to grow more fond of her work, Chemtrails Over The Country Club could not have come at a better time.

Chemtrails Over The Country Club is a forty-five-minute-long album composed of eleven songs. The album as a whole is a beautiful piece of work. Each song has a mellow tune, some even have a hint of country intertwined with her usual indie-like style. There was not one song that I disliked, and three of the songs I particularly favored over the others.

Del Rey’s seventh song in the album, “Not All Who Wander Are Lost,” has a combination of her harmonized voice and a soft acoustic guitar that provides a soothing tune. Like a river, the feeling of tranquility rushes over me when this song plays.

The lyrics, “not all who wander are lost,” are repeated frequently throughout the duration of the song. These words are sung over and over to emphasize the significance of the phrase. Del Rey is saying that someone does not have to be lost in life to look around and discover new things. Along with the angelic musicality, this song has a profound meaning to live by.

In Del Rey’s first song in the album titled, “White Dress,” she sings about her life before fame. In the chorus, Del Rey says, “Look how I do this, look how I got this, I was a waitress working the night shift.” In these lyrics, Del Rey is comparing her waiting-table times to her fame and the path she took to creating pieces that millions of people adore.

Del Rey also sings, “It kinda makes me feel, like maybe I was better off, ‘cause it made me feel, made me feel like a god.” To be blunt, she is simply wondering if her life would have been better if she wasn’t famous. Del Rey portrays melancholic, nostalgic emotions of her past, wishing it was still as simple as it used to be.

Del Rey has a celestial voice that pairs well with any instrument. For the case of “White Dress,” her voice was paired with a fluid piano. There could not have been a better combination for the musicality of this song that would perfectly fit the tone and lyrics like this one.

Del Rey’s ninth song in the album titled “Breaking Up Slowly,” is accompanied by country singer Nikki Lane. Tammy Wynette, who is also a country singer, is referenced multiple times in the song and during her life, Wynette had twenty-six surgeries which developed an addiction to painkillers, her to survive a coma, and a putative kidnapping. Lane sings in the song, “I don’t wanna live with a life of regret, I don’t wanna end up like Tammy Wynette.” She sings this because earlier in the song, Lane talks about how hard slow breakups can be. However, if she never breaks up with her partner, she could live a life of regret. Lane doesn’t want her life to become like Wynette’s.

Wynette is also mentioned in the second verse when Del Rey sings, “Georgе got arrested out on the lawn, we might be breakin’ up after this song, will he still love me long after I’m gone? Or did he see it comin’ all along?” George Jones was Wynette’s husband. After their divorce, he got arrested multiple times. This verse in the song is sung from Wynette’s point of view.

Since Lane is a country singer, “Breaking Up Slowly” leans much farther towards that genre of music. I have never been too fond of country music—unless it is Taylor Swift, of course—but this song has an enchanting, peaceful tune that I greatly enjoy. Lane and Del Rey’s harmonizing voices just add to the graceful facade of the song.

With Del Rey’s voice smooth like molasses, Chemtrails Over The Country Club is a treat from start to finish. Rhythmic, relaxing, and rich, this album is forty-five minutes of musical enjoyment.