Where the air is clear, take me 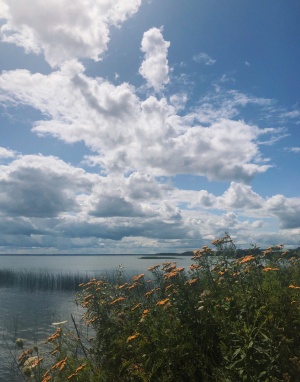 Take me where the water is the loudest voice in the town.

I long to feel each grain of sand get lost in the lines and crevices of my hand. I long to feel Lake Huron’s glacial pierce against my ankles once more. I long to relive the moments my brother tried with all the power in his arms to force my head down. In his defense, “It’ll make the temperature more bearable.”

I want to visit the town that welcomed the same girl each summer but with arms that cradled and cared for the changes the past year had brought her. With each year she gains, those arms will always be open–will always be there to recognize her growth and acknowledge her strength.

The air is cleaner here–it’s pure. There isn’t the “big city funk” where the air is being polluted by cars and taxis. Here, the community is just as encouraging as the arms that have welcomed me since I was little. After living in a few parts of Grand Rapids, Michigan my whole life, I didn’t pay too much attention to the vibe since I thought it was normal and everybody experienced this.

The city’s clutter and chaos were just normal to me. Granted, I lived in a relatively quiet neighborhood growing up, but the city air ruined the area’s well-being. For the longest time, I hardly noticed the mechanical hums or road-noise, until I traveled four hours northeast.

The water was the loudest voice in the town.

Alpena, Michigan has a small downtown. Really, it looks just like any other small town; brick storefronts, small sidewalks, local and family-owned businesses. It’s great from the view of somebody who doesn’t see eye-to-eye with the town, but it is a generator for exhilaration to somebody who knows the town.

The colorful flower baskets, kind employees, ambrosial cafes and restaurants, and of course, the fish statue near Rusty Petunias are some of my favorites in this small town. The little things presented in this small town affected me, somebody, who hasn’t had much experience outside of a city. Of course, big cities have architecture, maybe not a statue of a fish sitting on a bench like Alpena, but there’s more meaning behind the pieces, and it makes the atmosphere in the town warmer.

Even though Alpena is my go-to happy spot, I would never live there. I’ve become accustomed to falling asleep to the sound of cars and well-lit areas. Living where the water is the loudest voice in town would drive me mad if I were to live there.

I want to feel the freshwater against my skin, but for now, I like the peacefulness of Alpena’s small-town glory.