Men wearing dresses is more than just a statement, and its been that way for years 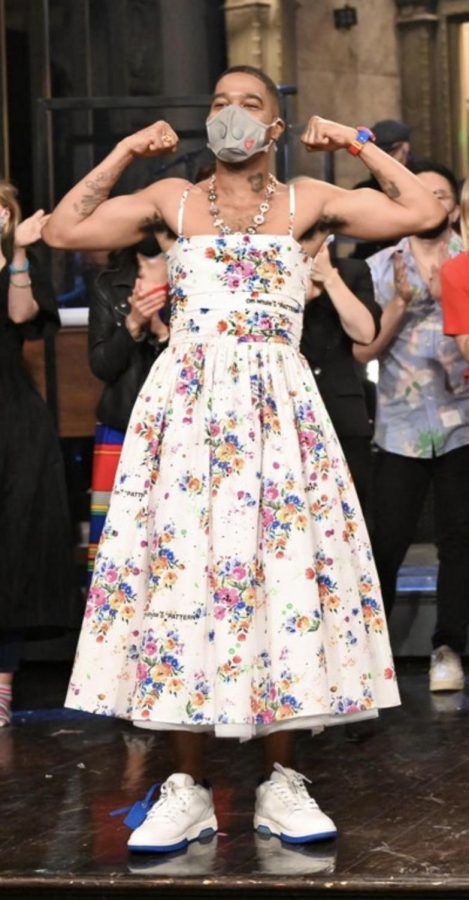 From gowns to skirts, several men spreading across the decades have elevated their fashion choices by adding these stereotypical feminine garments to their wardrobes. By doing this, they have rebelled against cultural standards regarding gender expectations, all while being true to themselves and their style. As the world progressively evolves in terms of acceptance of non-conforming ideas and lifestyles, men rocking dresses have become more common to the media as of recently. As much as a man wearing a dress is a statement in itself—which it should not be anyway—it can have a more deep-rooted significance to some.

Last weekend on Saturday Night Live, rapper Kid Cudi performed a tribute to Kurt Cobain by wearing a floral dress mimicking a similar garment Cobain had once worn. To say the least, it was a beautiful performance and a perfect way to honor the deceased legend. But one thing I find very unusual about this is the lack of attention this has brought to the media. There have been sparse news articles and a small portion of Twitter banter, but that is as far as I’ve seen for something quite as meaningful as a Kurt Cobain tribute done by a man in a dress.

In the late end of 2020, Harry Styles was planted on the cover of Vogue embellished in blue and black frilly layers, figuratively speaking against gender norms and societal stigmas surrounding clothing and fashion. While I believe that this was another significant and important expression of artistry and femininity through the masculine, it has been done frequently in the music and fashion throughout the decades with even deeper underlying intentions—in other words, he had received a greater amount of recognition for doing the same thing as others that came before him. This is in no way an attack on Harry Styles, but he has privilege—a one-up if you will—in this subject at hand.

Moreover, during the time of the Harry Styles Vogue shoot, the only thing I saw on social media that week was an endless amount of talk about this dress. There were fans relishing over Harry’s fashion fluidity and confidence or haters revolted by his act—but either way, it was a highly discussed matter. Of course, I am pleased that Kid Cudi has not received much backlash or negativity, but why has there been scarcely any talk about him and his dress whatsoever?

Styles’s dress-wearing was viewed—at least by the supportive people— to be this revolutionary, fashion-forward statement. Well, that is not wrong, but Harry was not even close to being the first one to do so.

Take a look at Billy Porter—for many award shows and interviews, Porter has boldly radiated his confidence and style through his extravagant dresses, skirts, and flamboyant garments. Additionally, Prince expressed his “femininity” through feathers, glitter, and typically feminine silhouettes. There are many other men—especially singers—who have displayed their feminine side through fashion as well. I think that if any man can embrace that side to them, they should let it flow by all means in any way they feel.

What bothers me is when Styles—a conventionally attractive, white, cisgender male—reveals his femme and fashionable style, he acquires an abundance of recognition, when in reality, stars like Prince were the pioneers of this sense of style and flair.

This causes another concern to emerge: is race playing a role in this issue? I think yes. Back to Styles once again, his general acceptance in society—meaning he fits society’s mold of assent—has given him a more sanctioned path to tolerance and admiration. Regarding Kid Cudi, Billy Porter, and Prince, all of them had/have racism to deal with on top of criticism about clothing. When Prince was at the pinnacle of his career, I’m positive that he did garner a lot of scrutinies—most likely the same for Billy Porter. The point is that when these men of color put themselves even further on the line to either display themselves more accurately or to make an artistic statement, they have much more to lose. And when a white counterpart usurps the credit—may I add unintentionally—that places yet another blockage in the person of color’s path.

Obviously, this is nothing new. This is always how it has been. But the point is just to acknowledge the fact that even in matters of men wearing dresses, there is a level of privilege that may not be clear to the eye.

The message that I am trying to convey is that men who wear dresses sometimes do it for a deeper implication than what it might just appear to be. The African-American men who have presented themselves in these ways have subtly protested against white supremacy and the standards set for them to be “extra masculine” or “extra tough.” So, when Harry Styles shows up wearing a dress, just appreciate that he has drawn some inspiration from the others before him and that he is not risking quite as much as some. But no matter what, any man who chooses to wear a dress exposes himself to hate and danger for just being authentic. My emphasis is on showing them respect for being themselves and understanding the unfortunate risk behind doing so.

I absolutely love seeing people becoming more and more fearless about embodying authenticity, especially when the gender norms are snapped in half. Kid Cudi—as well as Harry Styles in regards to fashion—has further elevated this movement while showing respect for the original male dress-wearers, also contributing to the remembrance of another legendary singer and fashion icon, Kurt Cobain.

All in all, just let anyone wear whatever they want because clothes do not define gender in any way, shape, or form.