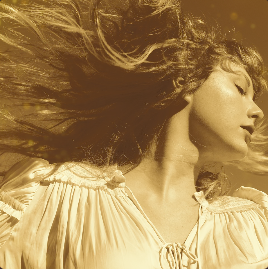 I am the epitome of “super fangirl” when any Taylor Swift song happens to be playing. At one point, I owned CDs of all her albums and would play them religiously. When Taylor announced plans to release more music back in 2019, I never expected three albums all in roughly eight months: folklore, evermore, and Fearless (Taylor’s Version).

Both folklore and evermore struck me with excitement at just how good Swift’s vocals are and how talented she truly is. With Fearless (Taylor’s Version)—her most recent album—she revamped some of her older classics like “Fifteen,” “Love Story,” and “You Belong With Me.” Although the songs were perfect when she wrote and released them all those years ago, having a modern-day Swift version forced me to take a trip down memory lane and feel nothing but love and nostalgia.

The whole album felt original and unforced. She was genuine with her singing rather than covering up her talent with autotune and other voice filters. Swift’s last two albums have had a very soft tone and smooth singing—it felt very refreshing to hear her venture back to her old country music roots.

With 26 songs on the album, there’s a lot to unpack and process. Firstly, every song on Fearless (Taylor’s Version) has the same name as her 2008 release Fearless, which explains why the album titles are also the same. Though the song titles are the same, the 2008 and 2021 versions are very different. For example, my favorite song from the album, “The Way I Loved You” sounds nothing like the 2008 version. The singing on the original “The Way I Loved You” was quiet, and doesn’t catch my attention like the way the 2021 version did.

Swift was 18 when Fearless was released, so her voice sounds younger and doesn’t execute the same energy as the 2021 version. The same energy goes for the rest of both albums. Fearless (Taylor’s Version) has a more mature tone to it compared to the classic Fearless. With over a decade of practice and maturity, Swift showcased the growth she’s made primarily on this album compared to her last two.

Swift’s idea to re-record her hit album Fearless years later stemmed from her record label, Big Machine. Big Machine owned all of Swift’s master recordings and sold them to Scooter Braun, which then sold them to a private equity group. Braun and Swift have a rocky relationship, so as a wonderfully petty move to the three, she’s re-recording the first six of her albums to reclaim ownership.

“Mr. Perfectly Fine” reminds me so much of the older love songs that seem like they would be on Fearless originally. The lyrics are very catchy and the guitar in the background brings out the country that was intended. Overall, I was very impressed with how upbeat and nostalgic the song was while keeping the country tone.

Fearless (Taylor’s Version) arrived so quickly and unexpectedly for me. Although I failed miserably at trying to solve the puzzle on her Instagram story, which hinted at the song titles, my self-proclaimed “super fangirl” title remains after, yet another, phenomenal release.