After seven years, Sims 4 has finally given the fans what they’ve been asking for 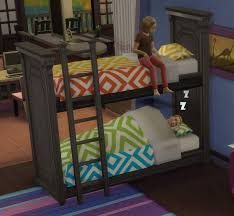 The incredible bunk beds that were added into the Sims 4 within the newest update.

After many long years, Electronic Arts, the creator of the game Sims 4, finally added bunk beds to the game, making my Sims 4 experience that much better. There is no longer a need to use the ‘move objects’ cheat in hopes to create the ultimate virtual bedroom.

Once I saw the announcement from Electronic Arts, I was in total disbelief that, after seven long years, the Sims 4 community just added the objects I have been longing for.

For those who don’t know what the Sims 4 is, it’s a simulation game which allows you to create your own Sims—little animated characters. You’re allowed to control their lives and have the ability to build their houses as simple or complex as you want to.

Bunk beds are one of the most famously hacked objects simmers try to recreate. In the newest update, released on March 23rd, 2021, Electronic Arts gave Sims fans exactly what they wanted.

This might seem insignificant to anyone who doesn’t play the Sims 4, but, for someone who plays the game very frequently, it added that last bit of pizzazz I’ve been wanting.

In regards to the build mode, the newest update offers four different types of beds to choose from. Either the basic two bunk for both kids and adults or add a little spice and have a  loft bed to give the player more space to add trinkets into the room.

However, one downfall with the loft style is the fact that I’m not allowed to put desks under the bed without using the cheat to move objects wherever I want. This is just one small detail, but it would’ve made the update so much better—especially if I’m trying to recreate the perfect dorm room.

The desk is one very small flaw compared to the noticeable detail Electronic Arts put into the update. The rest of it is extremely detailed, such as the amazing sheets that they let you customize to your Sims’ characteristics.

Additionally, the lofts allow players to put toddler beds under the upper bunk. This is yet another space saver in case the player is trying to save their money.

One of the biggest examples of the extreme detail included in the update is the fact that they give me the ability to change the color of each individual bunk in case I have two Sims with opposite personalities and want to express that within the color of the covers that are displayed on their beds.

As for the bed sheets that I can change per bunk, it’s just so nice that Electronic Arts put that into the update; the little details were what made the update so incredible.

The two styles of bed frame are different variations of a wood color or the more modern style of a metal frame. The small detail of allowing different frame colors for the beds just shows how smart Electronic Arts is when it comes to considering all the different styles of builders.

In the update, they also added one more hair option for both male and female characters, along with  more color variations of the artwork that is included in the base game.

I am thrilled that Electronic Arts listened to the voice of their audience and worked to make the game that much better by giving the fans what they’ve been longing for.