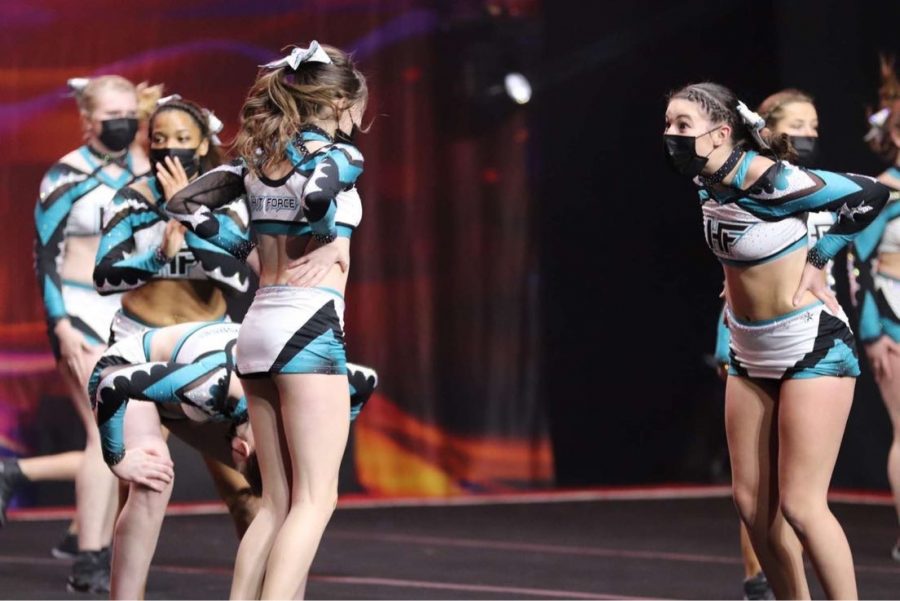 Freshman Eisley Sandefur began her cheerleading career at the age of six.

“I started cheer when I was very young,” Eisley said, “but we moved states, so I had to adjust and get back [in] to it so that I could be able to do travel cheerleading [in Michigan].”

Now in high school, this rising athlete takes on sideline cheerleading for the FHC team, competitive travel cheer for Hit Force Athletics, and plays on the FHC golf team.

Eisley always planned to pursue a life with cheer, her involvement with the sport following in the footsteps of her mother and sister.

“My mom used to be a cheerleader, and it passed down to my sister,” Eisley said. “I used to go to every varsity football game and watch her cheer. Also, I always looked up to the college [level] cheerleaders. My sister used to do competitive cheer, and I was very young when I would watch, but it was so exciting to me that I still remember.”

Unlike many trained cheerleaders, Eisley did not begin her journey with gymnastics. It was cheer from day one—that is until she moved states.

“I actually started with cheer in Indiana,” Eisley said, “and did a ton of tumbling. I started [to get] back [into training] with gymnastics in Michigan until I could find a good cheer program here.”

Gymnastics training serves as a great base for many skills accomplished in the cheerleading realm. Eisley has found herself utilizing many of her gymnastic tricks within cheer performances— all in all, the two sports show vast similarities.

“My favorite cheerleading trick is a round off triple back handspring,” Eisley said. “The hardest trick it’s been for me to master would be multiple back springs or [a] back tuck, but I’m working on those.”

While cheer may seem like pompoms and big bows, there’s actually a lot more to it. A traditional cheerleading stunt takes a group of four to complete: there’s two bases, a back spot, and a flyer. Eisley has taken on the role of each at some point since she began.

“For Hit Force, I started out and did mostly basing for stunting,” Eisley said. “For sideline, I did basing and back spotting, but when I was younger, I was a flyer.”

Eisley cheers both sideline and competitively, two different forms of cheerleading that many conjoin into a single idea. What’s the difference?

“Sideline cheer is mostly chanting for the football team [and] getting the crowd pumped [up for the game],” Eisley said. “Competitive cheer is about showing your skills and improvements.”

For competitive cheer with Hit Force Athletics, Eisley is taking on around six hours of practice weekly, excluding additional competitions. At each competition, her competitive team competes around two times. Competitive cheer also calls for a large amount of traveling; with cheer, she’s made way to Missouri, Wisconsin, Ohio, Indianapolis, and is soon heading out to Orlando.

While Eisley recounts trying out for her Hit Force team to be her scariest cheer moment, she’s also made unforgettable memories with her teammates. Though competitive cheer is a separate ball game, bringing different joy into Eisley’s life, she still values time spent with her FHC sideline team.

While cheer may have brought Eisley a couple black eyes and goose eggs from time to time, her proudest moments, such as achieving new skills right before performing, make it all worth it.

She hopes to fulfill her lifelong goal of cheering in college at football games, basketball games, and continuing competitively.

“I am planning on cheering in college,” Eisley said. “Indiana [University Bloomington] has been my dream since I was little, but I still want to check out other colleges [too].”

Keeping in mind Eisley’s ultimate college level cheer dream, she still has many years to go until that can become a reality. For the time being, she plans to focus on self improvement.

“[With my years left in high school], I plan to level up, get more skills, [and] be the best cheerleader I can be,” Eisley said.