The “attention-seeking” label is harmful and uneducated 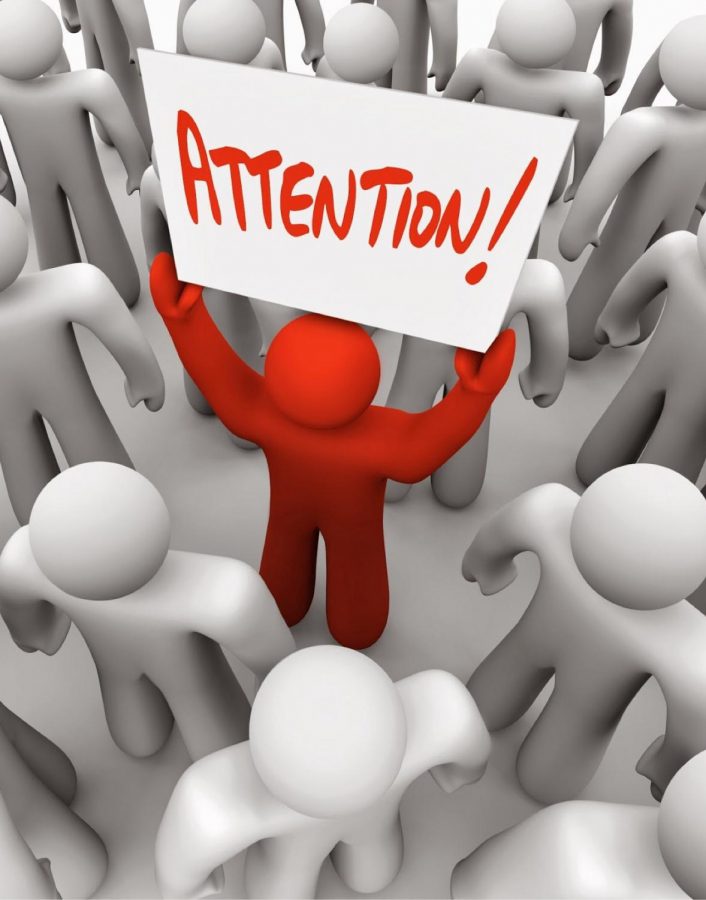 It is easy for one to get angry with attention-seeking behaviors, but looking into the topic can help one to understand.

These phrases have been spoken many a time by people around me, myself included. It’s easy to put others down like this; on the surface, the alleged “attention-seeker” can look like a total narcissist only looking out for themself.

For a long time, I stigmatized anyone who openly talked about depression, self-depreciation, or any other form of mental health issues as “attention-seeking.” I couldn’t understand how this wasn’t a negative thing that shouldn’t be called out.

While these behaviors are indeed attention-seeking, they are not occurring because an individual is especially self-absorbed.

Humans, by nature, crave attention. Not only do people crave attention, but attention is also what humans need and all want at the core, even though many people appear shy and quiet. Attention is something that everyone seeks, but this is usually thought of in a bad way rather than a basic, everyday want.

However, if we focus on the individuals who are most commonly thought of in this negative light, we can see that while yes, they are seeking attention, it is because they are struggling.

Some are fortunate enough to be comfortable with and have resources when they are going through a difficult time in their lives— someone they can openly vent to and talk about their feelings. In this context, this behavior does not seem attention-seeking as much as it looks reassuring, which has little to no stigma attached.

On the other hand, when one does not have a person to vent to and open up to, they look for other outlets. Social media is an extremely common way for one to share information and feelings in a way that is open and not specified to any one person.

It’s not uncommon for there to be a concerning message posted on the account of the person that is struggling when they are seeking help. Whether they be in a physical or mental low, they are certainly feeling alone and helpless. The easier option for most is to assume the person is fine—or even think of them as self-centered. Others may believe that the person is indeed in a difficult place, but figure it’s not their problem.

This, ultimately, can be detrimental to the person who is “attention-seeking.” If no one reaches out to them offering the needed help, it could potentially cause the person to fall even deeper into their pit of struggles.

The people who carry on with their day and don’t bother checking in with their peers who are having issues aren’t heartless; they are uneducated on the topic and need to look into the reasoning behind the posts that are “seeking attention.”

Many believe that when someone opens up about their mental health disorders or issues, people believe they are faking it and just seeking attention. Interestingly enough, certain types of mental disorders cause one to crave attention even more so than those without.

Taking the time to reach out to someone who is posting concerning things on their social media can have a greater effect than some would imagine. Since the entire reason the person is seeking attention is to talk about their feelings, being there for a friend in need can improve their mental well-being as well as others’ views.

This wholescale stigma can be helped by just one person. Reaching out, refraining from using attention-seeking as an insult, and educating oneself and others are ways everyone can help to reduce the stigma around attention-seeking behaviors.

If someone has the resources to be able to talk about their feeling, they can spread their gratitude by being a resource for another person. Attention-seeking isn’t just contained to those who rant on social media; we all crave validation in different forms. It is only natural.