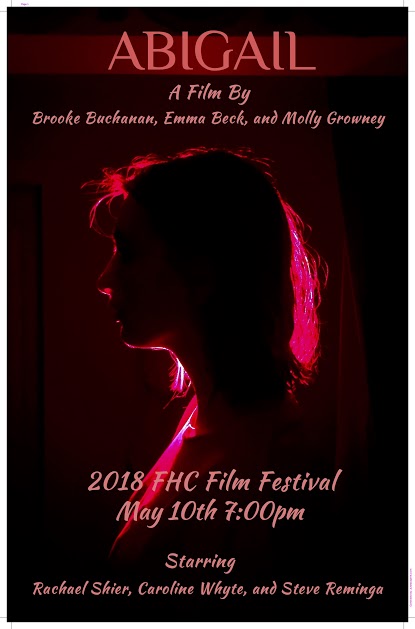 “Abigail is about a young woman who moves into a new house after college. She is faced with events which make her question if she is in danger from an intruder or if she is spiraling into insanity.”

2. What is the theme of your film?

“The theme is to not let other people’s opinions make you doubt yourself. You should not let others define you.”

3. What is the inspiration for your film?

“We knew we wanted to create a film that would leave people speechless at the end. We played around with a lot of different ideas but ultimately decided on a psychological thriller. I can’t reveal the exact source of our inspiration because that would give away the ending.”

“The filming process was fairly easy because we started very early on. We knew there would be a lot to do with editing, so we saved a lot of time for that. Editing was harder because there was so much to do in order to make it all fit together.”

“We chose Rachael Shier to play the role of Abigail because she is an incredible actress and was in our film last year (Therapy), where she was able to play a very convincing and ominous character. We chose Caroline Whyte because she is also an amazing actress, and we really wanted to work with her this year. We have some very talented adults in the film as well in order to make everything seem more realistic.”

“My favorite part about the creative process was probably writing the script. I loved coming up with the ideas and trying to piece everything together in my mind. When something clicked, we all knew and became even more excited about the final product.”

“Our audience can expect to be entertained and left shocked by our film. Our hope is that people leave wondering what actually happened in the end and also question what is real and what is not.”

9. How is your film different than the rest?

“Our film is different from the others because it really does leave you thinking. It makes you question the reality of what you just watched.”