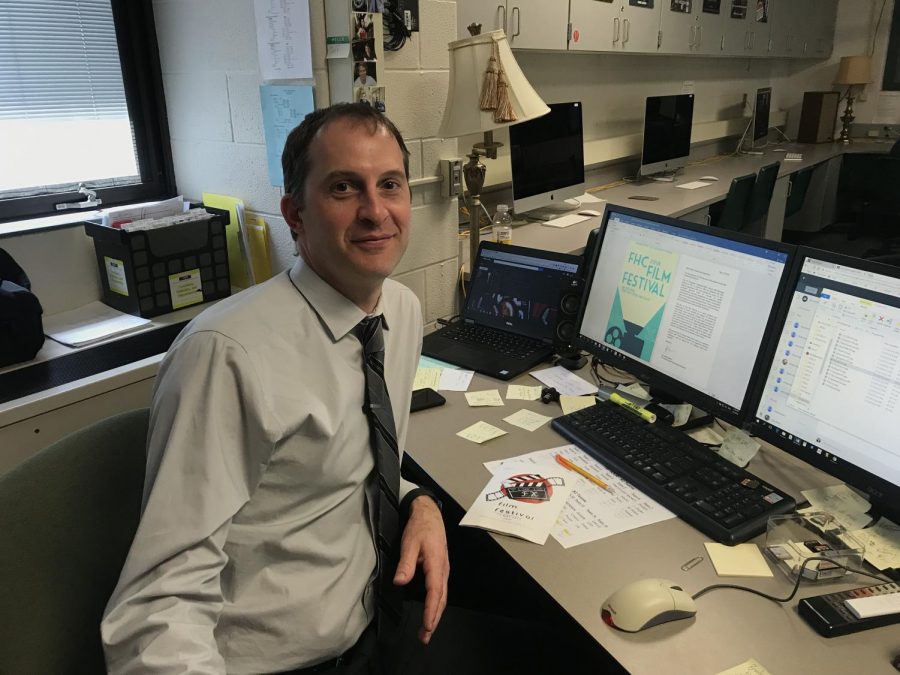 Media Comm. teacher, Jeff Manders, seated at his desk, circa 2018

What is Film Fest?

“The FHC Film Festival is the annual opportunity for the FX students to showcase their creativity, production skills, and resilience. It’s also a great opportunity for the FHC community to come out, relax, and enjoy some entertainment. We have eleven films this year, each ranging from 10 to 15 minutes long. They include dramas, comedies, actions/adventure, and suspense films.”

Why did you choose to start this project?

“I continued this project from the FX teacher before me who started it many years ago. I’m a big proponent of project-based learning, and this project is a massive learning experience for sure. The FX students have been working on their films since the beginning of the school year.”

How many years have you been running the festival?

“I’ve been doing it since I started teaching at FHC back in 2010, but it was here before me, going on [for] probably 20 years now.”

Is there a specific film that stands out as your favorite that’s ever been made?

“Every year, there are a few standout films; the students can attest to that, be it the storytelling or the cinematography and editing. But in general, I’m always amazed at how hard each film team works, what they are able to achieve, and the challenges they are able to overcome. Each film is an undertaking in itself.”

What makes this school year different in pertinence to Film Fest?

“Well, you might have heard that we are in a global pandemic, so that’s added some new challenges. Last year, the FX students were in the middle of filming their movies when everything was shut down, so I’m very excited to be able to provide this opportunity for my students this year. We will be using larger spaces here at FHC to show the films, like the gym and auditorium, so the audience can properly social distance. Also, students had to keep their safety, and the safety of others, in mind when filming their movies.”

How does this culminating activity play into what you’ve taught throughout the year?

“Throughout the school year in FX, students develop storytelling, filming, and editing, as well as teamwork and organizational skills. So this project is taking all that they’ve learned and using it for a much larger project than the short minute and thirty [seconds] news stories they create for the FX broadcasts.”

Any advice for new filmmakers who want to take part in Film Fest?

“Yes, take the Media Comm. and Film Projects courses so you can be a part of FX and the amazing FHC Film Festival before you graduate!”