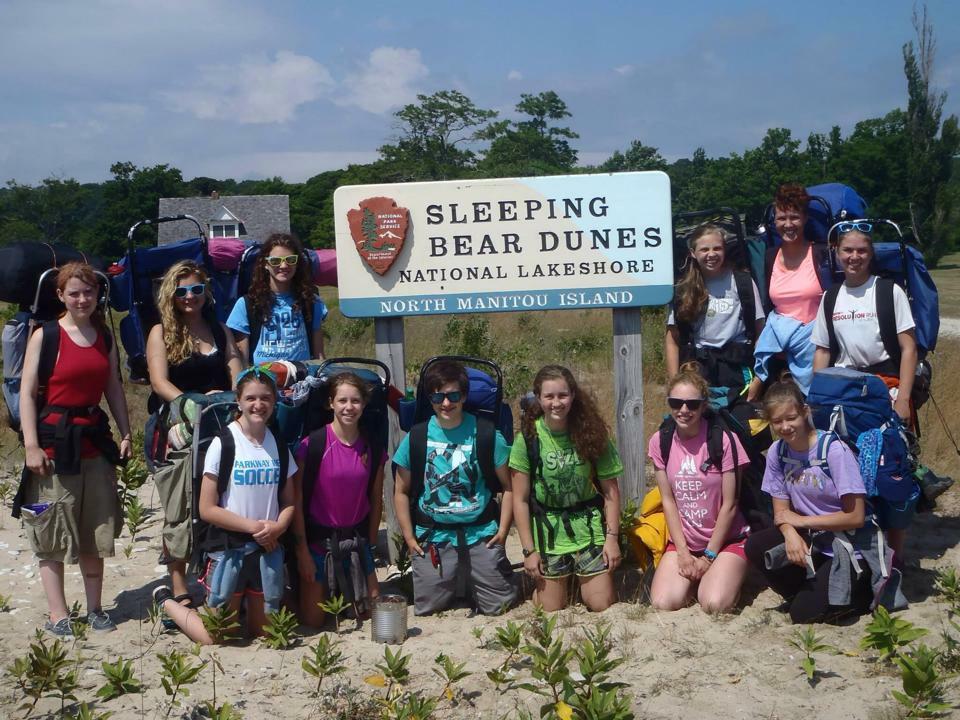 What I’ve Learned From Camp…

As school draws to a close, exam week stands in front of me like a big black gaping hole. One more week, three more days of studying, and then summer. These past weeks there has been so much knowledge crammed into my head, pushed in by people who say the knowledge I learn here is important for my future. I agree, and I strive to become a well educated person. But now, while staring at a seemingly impossible week of testing, I found what will get me through this upcoming week of hell: the lessons I’ve learned through years of staying at Camp Newaygo.

Grace Clinger, an incoming freshmen, has been at camp with me for as long as I can remember. Together we talked about the values that camp has taught us. Facing her last week of middle school exams and going into high school next year, she has realized that what was once just a fun week away from home has become an influential learning experience as well as an inspiration.

“After trudging six miles with giant hiking backpacks on our backs in 95 degree weather with no water, it seems like anything is possible,” said Clinger. “Whenever I get in a hard situation, I think ‘I was able to do that at camp, so of course I can do this now.'”

She also feels like camp has taught her how to be a responsible student and a more dependable friend.

“Camp teaches you responsibility and perseverance,” said Clinger. “Before camp, you couldn’t count on me to do anything. I was so unreliable and irresponsible, but after having to do so much work for yourself, you gain much more responsibility.”

This newly-gained sense of perseverance and responsibility is sure to help her through her exams, as well as new experiences in high school next fall.

Personally, I’ll be taking a different approach for surviving exams. I am not a patient person, so sitting in a room for hours on end taking tests on subjects I couldn’t care less about is not just boring, it’s absolutely infuriating. What will keep me in my seat and focused is the fact that in a few days time, I’ll be back at camp.

Allow me to explain something to those of you that have no prior experience of summer camp, or at least one as awesome as Camp Newaygo.

Our camp community is close. Many campers have gone for several summers in a row, and with only around 100 campers at any given time, you get to know almost everyone on a personal level, or at least a first name basis. These returning campers are the people I’ve grown up with. The campers that once taught me how to light a fire and kayak are now my counselors. Going back each year allows you to see people grow and change, and over the years, other people to see you grow and change as well. While a part of me would love to say, I’m ready to move on, I’ll admit I’m a little more than sad that this summer will be my last year going back.

As one of the older campers, there have been moments I’ve been a little too confident I know everything there is about the camp experience. Time and time again I’ve been proven wrong; most recently by Abby Wolff, sophomore.

We were friendly, but not friends, and when she arrived at camp last year I was sure I knew the kind of person she was. I had no idea how wrong I could be.

Laughing about our first impressions of each other she explains to Clinger, “I had never really been friends with Emma Cardin. So when we were thrown together at camp this past summer, our relationship had a pretty awkward start.”

Her statement is accurate, the first day was pretty awkward. I knew almost every person in our group from summers before except for her. Because these girls knew me very personally after so much time together, I was worried she would judge me and bring those judgements back to school. Until we talked today, I had no idea she had the same worries.

“I couldn’t relax, and be myself because I felt the need to live up to her impression of me from school.” explained Wolff. “ After a few days, we gradually opened up, and I was introduced to this vibrant, kind, and hilarious girl I had wrongly judged from the other side of a classroom.”

Wolff once again showed me I could still learn from camp. The particular lesson she exposed me to was the inaccuracy of first impressions.

That morning, in the media center, we reflected on our camp experiences. The three of us agreed that some of our best memories have been made at Camp Newaygo.

“My summer camp is an astonishingly welcoming environment.” said Wolff. “Where I feel like I can, as cliche as it sounds, truly be myself and make lasting friendships.”

“Camp definitely changes your perspective of things,” Clinger responds to Wolff. “After spending time with so many different people, you start to become more open towards new people in real life. Camp teaches you that everyone is good at heart, and you become so close to girls that you didn’t even know before going to camp.”

Through camp I’ve made irreplaceable friends like Clinger and Wolff, learned lessons from them like the inaccuracy of first impressions, and have understood the weight responsibility holds. If I could, I would explain an unspeakably large amount of other invaluable lessons. Luckily I have one more summer to figure it out.

Which brings me back to the beginning, because before summer starts, there is the daunting task of passing exams. My summer camp friends, the values I’ve learned, and the promise for one last amazing summer will keep me going. It is said, “God doesn’t lie within the four walls of church”. I believe knowledge does not lie within the walls of a school. Some of the most important lessons I have learned out of the classroom have enabled me to succeed in a classroom environment as well as in the real world. I’ve learned these lessons not under the gaze of a teacher, but instead under the careful watch of a warm, starry summer night in Camp Newaygo.