eAchieve is taking FHC by storm this 2015-16 school year! 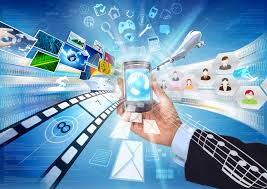 Wham. A hand is suddenly slapped down onto your desk, snapping you out of the trance your Iphone has put you in. You look up to meet the angry gaze of your history teacher, one who has a sneer plastered on her face and her hand outreached in front of her. “Phone, please,” she remarks snidely, and you find it difficult to part from the device that hasn’t left your side all day.

Usually, this is what happens whenever your teachers catch you sneakily scrolling on Instagram  with your phone tucked away in you lap.

However, school districts are finding that as times evolve, it is necessary that rules evolve right along with them. Technology has taken the 21st century by storm; to ask students to abstain from devices that allow them to have the world at the tip of their fingertips is rather silly.

A modern program called eAchieve is focusing on the value of these previously forbidden devices and what they have the ability to accomplish in regards to classroom curriculum. Murmurs have rippled through FHC’s halls about the mysterious arrangement for the past couple of months; however, a recent Listserv and a school-wide assembly have certainly cleared matters up.

“This isn’t something that’s new,” Environmental teacher Chad Scholten said, in response to the rumors and evident gossip regarding the contemporary program. “All three Forest Hills schools are executing it this upcoming 2015-2016 school year, as well as EGR and GRC. Different districts call it different things; FHC opted for something fancier than B.Y.O.D. and ultimately decided to call it eAchieve.”

Scholten emphasized that the Forest Hills district has deliberately chosen eAchieve as opposed to implementing a similar initiative by the name of 1-to-1. 1-to-1 is a program where the district is solely responsible for both purchasing and distributing appropriate devices to each individual student. Due to financial reasons, however, the district has opted for a practical approach that allows students to bring their own devices to school each day; this presents students the freedom to choose what they bring, although there are recommended products such as laptops and Chromebooks.

After a year-and-a-half pilot program, extensive training, and scientific research, the time has finally arrived. The time has arrived to teach students that their Androids can do so much more than tweet status updates and transcend various levels of Candy Crush.

“You’ll use less paper, ideally,” Scholten said, smiling to himself. “ Also, by incorporating technology into our lesson plans, you’ll be able to access things both in the classroom and at home. It suddenly becomes easier for absent students to pick up their missed work so they don’t feel overwhelmed upon returning .”

Besides providing these obvious benefits for individuals attending FHC, eAchieve offers several advantages for teachers as well. Allowing teachers to give immediate feedback, the program contributes to “workflow” in terms of  completing assigned work, turning it in, and returning it back to individuals in a timely manner.

“ With eAchieve, everything can be done digitally,” English teacher John Fisher said, agreeing with Scholten. “Not only homework and quizzes, but assignments as well. This will obviously alter the methods we teachers can use as we lean towards a more project-based curriculum.”

With this obvious change that the district has implemented, it may take awhile for both teachers and students to adjust to the evident modifications. While FHC is still ironing out all the kinks in regards to a rent-a-computer program, the faulty Wi-Fi connection in many areas of the school, and a uniform power source, it is the students who  must soon get used to being scolded for not having their phones out on their desks. Many newfound concerns have arisen regarding what exactly this new initiative will entail.

“I think eAchieve just makes us have to lug around one more thing,” junior Chloe Bruchnak said skeptically. “Especially since a lot of people learn better when they actually write things out word for word as opposed to simply tapping a key to spell something out.’

However, it is ultimately the teacher’s decision to decide when they will incorporate devices and exactly how they will be used. Devices are not necessarily going to be utilized every minute of everyday; there is going to be a comfortable blend of both manual work and digital work.

“In most classes, you’ll probably be dealing with reading material,” Scholten said assuredly. “ It’ll be more about clicking and scrolling rather than typing out essays and responses. Not only does eAchieve help us accomplish things quickly and efficiently, but it also prepares students for the the real world, their life after high school, when computers and digital technology pretty much become a way of life.”