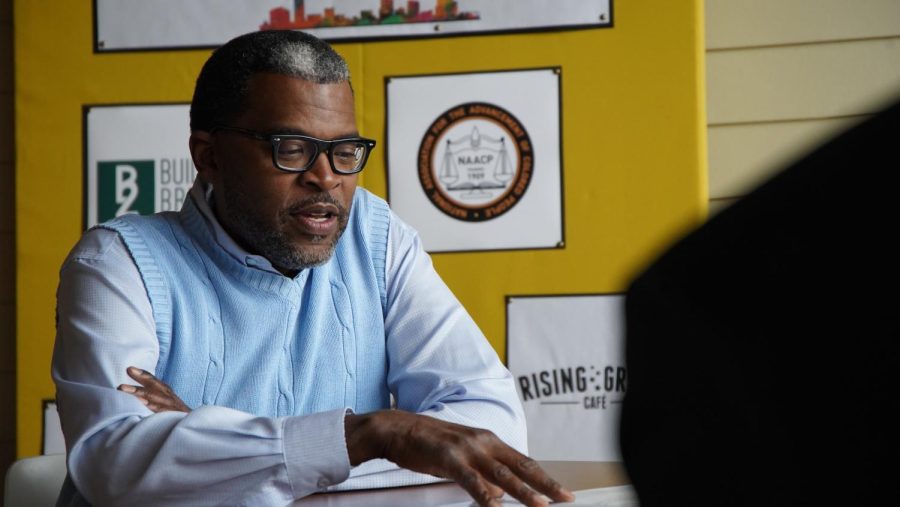 1. Can you describe your journey with the NAACP of Grand Rapids?

“I will say I’m an NAACP baby. I grew up in the organization. My parents had us involved at a very, very young age—involved meaning they had me as a card-carrying, dues-paying member as a youth and all throughout junior high, high school, and college. Then when I graduated college, they said, “Hey, if this is important to you, can you keep it up?” I was involved in a number of other things during my college years in terms of student activism with student government, different things like that. I really was not actively engaged in the NAACP, but I still was a member paying dues, supporting as I could. Then I returned home from living in the DC area and going to undergrad in the DC area. I lived out there for about 10 years and then moved back to West Michigan and started working with a national healthcare organization on the provider relations side and then moved with that for 10 years, then moved over to the community responsibility of community relations side, and that’s when I really got reconnected hands-on with the NAACP; they were one of my business partners that I managed that relationship for. That’s how I really got back into the swing of things, and I became very close with our immediate past president, President Hazel Lewis, and just started to get back to being a very active and involved member.”

2. Can you speak a bit on the importance and cultural impact of Black History Month?

“Black history for me personally, and I think for a lot of other people, is not just about one day; it’s 365 days a year. So that’s the importance of what we call ‘Black history.’ Carter Woods—I would say he took it to the map when he created this whole concept around Black history, which started out like a week and then kind of morphed into a whole month. But again, we have to be very mindful that there are 365 days in a year. And the cultural importance that Black people bring to the table and that all people of color bring to the table, with respect to influencing culture across the board, is so critically important because we have to understand that diversity is a thoughtful opinion. When it comes to the arts and entertainment, business, [and the] sciences, all of those things are so important to have everybody at the table in making sure that it’s celebrated 365 days a year.”

3. As a Black leader in today’s society, can you share any insight around the learning of the last three years and their impact on our culture, both in Grand Rapids and as a whole?

“I think, with respect to the protests and the pandemic, clearly, we have a lot of work to do. Oftentimes, and especially when we were in the midst of this pandemic, I got a ton of calls from white folks that I had really talked to on a certain level. They called, and they wanted my perspective on what [they could] do and what’s happening. [They] want to have a better understanding of some of these societal, sociopolitical issues that are happening.

The first thing that I would say to my righteous white brothers and sisters is that we’ve always been in a pandemic. Black folks have been in a pandemic. We were in a pandemic long before COVID-19 even reared his head—before we even knew what it was. We were in a pandemic when it came to economic issues, healthcare [and] education issues that disproportionately negatively impacted us. What the pandemic did is really just pulled the covers off in a major way, and it broke down the economic system not only in the US, but across the world. So then that got the attention of white folks because it economically impacted them. That’s what I hope to be a part of. People wanted to come to the table and have these conversations.

Black history is 365 days a year. It’s not just one month, and we have to always constantly remind ourselves of that and constantly remind ourselves to do the work. The impact of these last three years, I think not only on people of color [and] Black people specifically, but white people as well, is that it has created a disruption like never before. My biggest fear, even though it’s created that disruption, is that we’re going back to what we once knew is normal and what we perceived as normal.”

4. Looking forward to future generations, how would you like to see celebrations of culture such as this one adapt and be shared?

“I think you guys, [Generation Z], are more open. I think you’re a little more forward-thinking. I think you’re more open to breaking down barriers in a way. I always tell others that proximity is so important. What I mean by proximity, I mean relationships. It’s not just about having some Black friends or some Latino friends but then outside of that environment or even on a job, you never have a foundational relationship by engaging with them on more of an authentic and deep level [and] trying to understand their lived experiences. Make sure you have a group of peers that look diverse in terms of not just melanin or a skin color perspective, but the diversity of thought as well. I think that’s really going to be critical. And that’s the critical piece—making sure that young folk like you are very intentional in building those relationships with people who don’t look like you, who don’t think like you, that have not had the same life experiences, because that’s the only way that we’re going to move forward. When you hear your other peers [that] do look like you saying things that you know are fundamentally not true, then you can begin to challenge those thoughts.”

5. What advice would you give to a diverse high school demographic about priorities moving forward?

“I was on a [leadership] call today where it was a national call, and people were saying there were a lot of young leaders from across the country that were transitioning out of their roles [and] moving on to other roles. Then some new young people are coming in as young activists, and some of the folks kept saying, ‘We have to celebrate and honor these young folks who are the leaders of tomorrow.’ Every time that they said that, I was often reminded of our Youth Council, young leaders here [in] Grand Rapids; they always say, ‘We’re not only the leaders of tomorrow, but we’re the leaders of today.’

I would recommend that regardless of whether it’s a diverse high school or not, understand that you truly are the leaders of today. Leadership often requires sacrifice, and again, sacrifice requires making yourself a little uncomfortable with people that you have no real familiarity with and being intentional in building those relationships. You could have a diverse high school but still have a variety of racial issues and microaggressions. It’s about being intentional in those relationships and understanding the people that you are actually trying to build relationships with and educating yourself, whether it’s through reading or engaging in different activities, like becoming familiar and becoming members of the NAACP Youth Council.