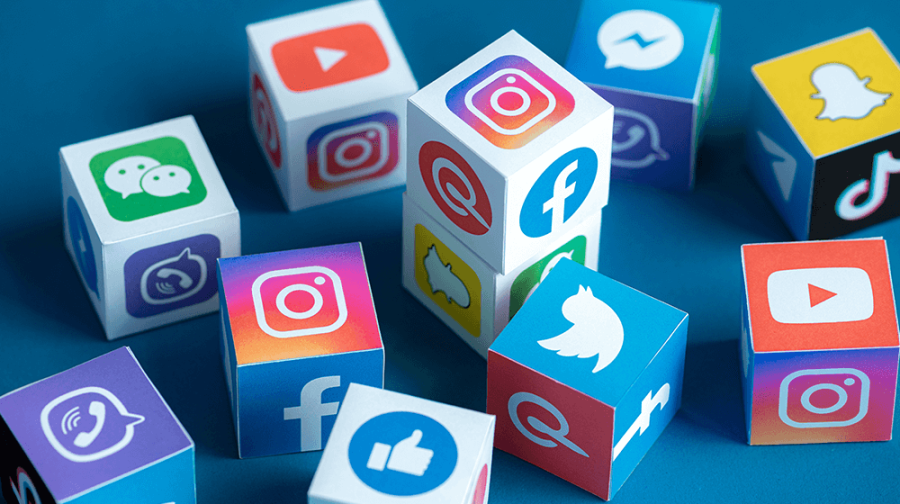 A collection of social media apps on blocks stacked together

The effect of social media on students and staff at FHC

Social media is a gift and a curse; junior Elizabella “Bella” Grounin has seen both sides of such platforms.

Bella is a user of multiple platforms such as TikTok, Instagram, and Snapchat. She has found and connected to a wide variety of people through these apps. For Bella, these apps are a way to have fun.

“I use Instagram to share things that I’m doing with my friends and family and everything,” Bella said. “I use Snapchat to talk to my friends. I’ve met a lot of people through TikToks. I use it for [meeting people], but I [also] like making videos with my friends and by myself.”

Bella has had the privilege of a good social media experience by not getting many negative comments or experiencing cyber bullies.

Cyberbullying is a pressing issue, one everyone acknowledges. It is a concern no one can ignore. Bella is thrilled she hasn’t encountered a bully on social media, but she knows it is a problem many are forced to deal with.

“I’ve had a pretty good experience [with social media],” Bella said. “It’s not like I’ve really gotten much hate, but I mean people joke around about [giving me hate] and that’s kind of annoying, but overall, I feel like I have a healthy relationship with social media. I definitely think that there is a lot of cyberbullying going on. It’s really easy to make fun of somebody on social media and not know that you’re hurting them.”

Cyberbullies attack and inflict pain on people’s emotions, but social media is causing their users harm with the addictiveness of the apps.

Social media companies has the goal of keeping you online as long as possible; it is designed to be addictive. Bella manages to stay clear of the addictive path.

“I feel like [social media is] kind of addictive,” Bella said. “But, I know that I can control myself, and I’m not addicted to it. I get all my homework done before I go scrolling through social media. I used to have a time limit on TikTok because I would go on it so much. And [with] Instagram, I would get ahead of myself. Now, it’s easier because I have school, but during the summer, it’s definitely harder because you’re either with your friends or you’re at home, and then, it was kind of harder to keep up with my chores because I’d want to be on my phone, but now that we have school, I know school is important. So, I just prioritize that [over social media].”

Senior Michael Campbell who uses social media apps to “Snapchat the homies” also noticed a trend of putting social media above school work in his peers.

I know that I can control myself, and I’m not addicted to it. I just make sure I get all my stuff done before, then go on my phone. I get all my homework done before I go scrolling through social media.”

Michael has avoided being caught in the wave of addiction social media sends his way, but discerned his fellow classmates are roped in and drowning. Michael also spied cyberbullying throughout his social media experience; he knows others face it every day, and he had the unwelcoming encounter with a bully himself.

“One time some kid bullied me over Snapchat.” Michael said. “He was calling me mean names I probably shouldn’t repeat, and that didn’t make me feel very good.”

Counselor Rachel Pini deals with a multitude of students and issues, social media and cyberbullies being one of them.

Pini is new to FHC but already is aware that social media is affecting her students. It could affect them in both positive and negative ways.

“You can have positive interactions with friends and peers.” Pini said. “For example, when I was in high school, there was a Twitter account that had anonymous kind messages about students that [attended our school]. People would submit them and they would send it out to students like, ‘This is what someone said about you.’ So, there are those things that you can do, but also there’s the flip side of that where it can impact students negatively. [With] cyber bullying, people are able to create anonymous profiles to talk about other students. So [us counselors have] also seen it being used in damaging ways as well.”

While there are positive aspects to social media, the trend seems to favor negative outcomes. From cyberbullying to addiction, there are a plethora of reasons not to download these apps. That won’t actually stop any high school student. Pini knows this and has social media herself, but sets limits.

“From what I’ve seen, and from research that [educators at FHC have] seen, the general trend is towards it having negative impacts on students if there’s no limits, whether that’s family or self-imposed limits.” Pini said. “Some students that I know have the time limits on certain apps just so that they can restrict their use of social media during work time. That’s a highly effective way to kind of keep [school and social media] separate. It’s like anything; [when] watching TV [or] even reading a book for fun, you just have to have certain limits on when you’re using it and when you’re focusing on your work or [else] it can distract your brain.”

Pini is a huge advocate for the time restrictions set on these apps; they can stop the mindless scrolling many engage in and allow more time to be set aside for work.

Your brain isn’t wired for endless scrolling and stimulation. The instant dopamine is actually telling our brains we can be happy sooner rather than later, so activities that take more time to lose our focus much quicker then they have before.

Pini acknowledges the issue that this can cause students who have long exams ahead of them.

“It’s hard [to study] when you’re constantly scrolling,” Pini said, “especially on something like TikTok, where there’s a lot of stimulation every time you’re scrolling, because those neurotransmitters in your mind that are like, ‘Hey, this is good, this is fun, I’m going to keep doing this.’ So, it can catch you up in a spiral of, ‘When do I stop doing that?’ I do worry about that with students. I think it becomes hard to [focus] because when your mind gets used to having that constant stimulation, sometimes it’s harder to focus on longer tests. For example, if you’re taking a longer test, it’s moving at a lot slower [rate than] your mind might be used to.”

Social media comes with a lot of baggage. While negative effects topple over the positive, there are still effects that don’t cause users harm.

The main purpose of social media is for people to connect. Bella has experienced this purpose and made close friends through social platforms.

Social media has been an outlet for Bella; she has grown secure in who she is and what she stands for while making more friends and connecting with more new people.

“I feel like I have a healthy relationship with social media,” Bella said. “I feel like it’s almost addictive, but I know that I can control myself.”