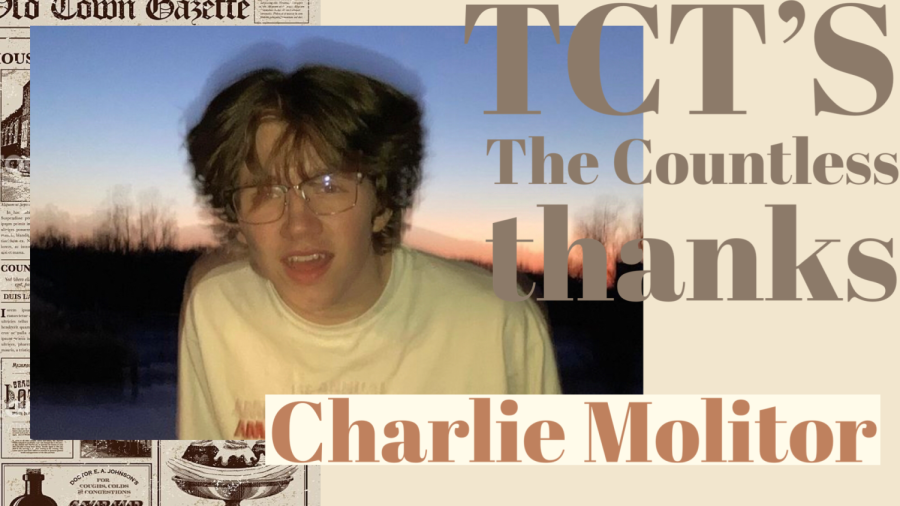 TCT’s The Countless Thanks 2022: Charlie Molitor

Emerson Burrows, for being the greatest homie of all-time

There are not enough words in the English dictionary to describe how lost I would be without you.

I don’t know a single person on planet earth who goes through as much as you and still keeps it pushing without losing an ounce of strength. I think it’s starting to reflect on me a little bit.

Laughing with you makes me wholeheartedly believe the saying, “laughter is the best medicine.” Everything from the Among Us pop-it on the floor of D&W, to Lil B releasing fifteen albums in 2012, to us discovering new places to hang out in the most obscure locations. I think if I was allowed to bring someone on a deserted island, it would 100% be you, just to keep me sane.

Skating with you is what made me want to do it in the first place. You getting excited about me unlocking new tricks is a different kind of dopamine, one that always seems to happen at the best kinds of times.

The constant support and energy that you give me are irreplaceable.

I am so excited about where you’re going to go in the future, and I know that whatever you do in your plethora of hobbies is going to be phenomenal.

Nate Evans – for teaching me during my freshman year

Going into high school, I was the most arrogant person known to man.

You really turned me from one of the most annoying people in the entire world to someone who has at least some consideration for other people.

Digital Media 1st and 2nd semester in Mr. Fewell’s class with you is one of the only reasons I enjoyed freshman year at all. Slacking off in his class and turning everything in half-done and a minute before it was due are some of the best memories I have in recent memory.

The amount of people that you introduced me to who have also had a big impact on me is countless. I think I would have a lot less opportunities without you.

You also taught me one of the best lessons ever: be as mature as you possibly can be.

I could have gone the entirety of freshman year being the same person I was the first day of school, but you taught me to change for the better, and that is undoubtedly one of the best things I have ever learned.

Kayla Quach – for always having something to say

If it’s just five minutes or almost ten hours, talking with you is never time wasted. I don’t think I’ve ever met someone who I can have unforgettable conversations with like you.

Even during the most uneventful times, we always have conversations that could literally go on until the sun explodes. The contrast between places we’ve been to is absolutely enormous, but the conversations in them never change even a slight bit.

I think that I found my social skills through you, and that is a priceless skill to have. I found a picture the other day from when I first met you, and I can’t believe that’s how I looked, but also how anti-social I used to be. I am forever in debt to you for getting me out of my shell. I swear I’ve learned more from things that you tell me than school will ever teach me.

You are the only person in the world that I feel like I can be my non-filtered and true self around, and without you, I would have a lot fewer things to tell.

Mr. Labenz – for being a good male role model

All throughout my life, I never really had a positive male role model that wasn’t a part of my family.

Ever since making the controversial decision to join APUSH, I am so glad that you’re the teacher.

The relationship that you have with your students is unparalleled by any other teacher I’ve seen while going to school. Maybe it’s because you’ve just been teaching for a while and know a lot, but it really makes me feel at home in your class.

TCT – for giving me an outlet to be myself

I could never be more thankful for a class than TCT.

Walking into Mr. George’s room every day for sixth hour seems more like a recess rather than an actual class period. The atmosphere in that class is unparalleled to a point where most other classes become ruined for me.

The love that I have for TCT is irreplaceable. I am extremely thankful for all of the upperclassmen who showed me how to do things that I still have no clue how to fully do, but you all made it a lot easier to understand. I am also grateful for everyone I know in WFP, who I get to experience this all for the first time with.

The first time that we all really became friends was the trip to Disney. Even though I had never been, I wouldn’t have wanted to experience an entirely new area of the country with any other group of people.

The countless memories from just 4 days alone are some of the memories that I reflect on the most. Everything from Maya’s atrocities to the most random meals in the world, makes me smile every time I think about it without fail.

Even though the upperclassmen from last year have all graduated and we have more responsibilities, acting like little kids with you guys is the only reason I somewhat enjoy marching for countless hours in unpredictable weather. Especially since you all make me the happiest person on planet earth without even having to try. I don’t think I’ve ever been more comfortable with any other group of people.

I am so absolutely excited for the next couple of years of marching band with you guys.

Jessie Warren and Natalie Mix – for educating me

Going into freshman year, I might’ve been the most arrogant person in the world when it comes to being social. I still have absolutely zero clue how you two put up with me, but I am forever grateful for it because I would be so much worse off without you two.

I think spending countless hours listening to Natalie and Logan argue about the most pointless thing ever really shaped my view of the world. Natalie would always win, like every time. I am also grateful that Logan sometimes chose extremely important topics and issues to argue about, and without telling me directly, Natalie definitely shaped how I viewed a lot of things like that.

Jessie and I never really became friends until Digital Media with Mr. Fewell. I am so extremely glad that you sat next to me in that class because it kind of changed my life forever. I learned so much from how you saw the world through your stories, and I think some of them got passed down to me. It was also extremely easy to talk to you because we had a similar sense of humor, which also made it easier for me to learn from you.

All in all, you two have given me so much priceless knowledge of the world through just simple conversation and I am eternally grateful.

The homies in chemistry – for making a confusing class enjoyable

I don’t think I’ve ever hated the material of a class more than chemistry.

Even though the class is extremely confusing and I still have absolutely zero clue what I’m doing, you guys have made it a lot easier to understand.

I think I would go crazy if it weren’t for this selection of people in that class.

Noah Burke – for being the ultimate therapist

I swear you are one of the smartest people I know and you have absolutely zero clue. You think of things that never would’ve even crossed my mind had they been right in front of me.

I think I would honestly be down and out without you. I cannot express the thankfulness I have for you setting me straight.

You hold almost all of the answers to the universe. I am sincerely thankful for FaceTime, too, because through that it’s like I have all of the cheat codes to life.

I also relate to you on an extremely personal level that I rarely find with other people my age. I think I’ve almost found a home through talking to you, even with the deep conversations and the ones that make almost zero sense.

Sofia Hargis-Acevedo – For the rides to and from school

I think getting aux is for sure my favorite part, because my music taste is just immaculate.

Even with that, getting rides from you is probably the best way to start and end school. Even though Logan and I make you the maddest person ever, I’m sure you can laugh at all of the memories.

Everything from complete silence, to us screaming our lungs out to the most random songs. It’s the only way I know how to start and end my day.