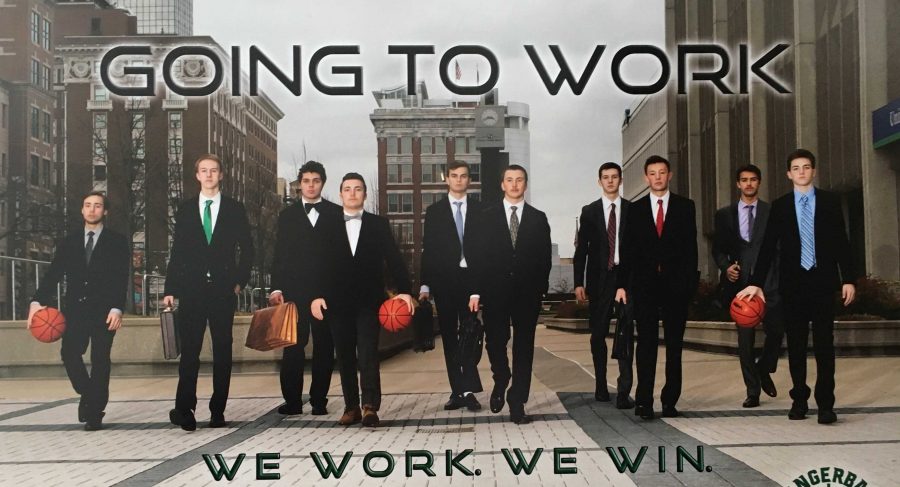 The feeling of pure joy and excitement rushes through sophomores Emma Dodson and Kate Ryan as they see their team, their family, make another basket against the undefeated team.

The overwhelming amount of effort put forth into the varsity basketball team, from Coach George but as well the team managers, Emma and Kate is underrated. The managers aren’t looked at when the team succeeds, they are just behind the scenes. The people unheard of and unknown for all of their help, the hidden team members.

“It all began with just Kate and I talking,” Emma said. “We had nothing to do after school, and coach George was looking for team managers, and we were like “hey, why not.a��”

As team managers, they are in charge of recording time for drills, keeping score for scrimmages along with counting baskets, and just helping out with whatever the team needs. They are just as much a part of the team as a player is; they have to commit their time and effort by going to the meetings, practices, and games.

“Staying after school every day for an hour up to two sucks. Sometimes I just want to go home and take a nap,” Kate said. “It’s a big personal commitment and not an easy thing to do.”

However, an upside to all of those long day, weekends, and tournaments are the relationships grasped from the players.

“You get so close with the guys because you spend so much time with them after school,” Emma said.

It’s seen that basketball holds commitments that challenge the team members, but the community is what glues them to the game and matches. The people, the relationships, the sport, all motivation to keep going.

“Just getting to know the guys on the team in a way not a lot of people know them is really cool,” Kate said. “It’s a really tight-knit community, and we all care for each other.”

“Wrestling teams traditionally have always had team managers, we have them to take statistics, help clean up the room, help with projects, film matches,” coach Brad Anderson said. “As long as I can remember we have always had team managers here at FHC. When I wrestled here [FHC], we called them mat maids back in the day, but things have changed since then; they are more of a managerial position now.”

There are three managers on the wrestling team: senior and head manager Rene Maier, senior Ava Stathakis, and junior and assistant team manager Emma Beck. Their journey to becoming a manager all started as a simple question and commitment.

“It was one of the best decisions I’ve ever made,” Rene said. “I’ve been able to make friends that I have never thought I’d make, we all have gotten so close. We are one big, huge family, the parents are amazing, the wrestling guys are caring, the coaches are understanding. Everyone is so considerate. Honestly, they are my second family.”

“It’s a unique experience to be able to be on an FHC team but in a different aspect than normal members,” Ava said.

Searching for a team manager who is organized and willing to put in all of the work and hours that are demanded from them is an extremely difficult job to do. It calls for special, determined, and disciplined people.

“I’m always eager to get sharp young ladies that want to help and want to contribute to the team and Rene has been right on the spot,” Anderson said. “She’s incredibly organized and is always willing to help out our team in any manner. She was a staple force, a great manager, and we’re going to deeply miss her next year, but I hope she continues this next year in college.”

Because of her role as team manager, Rene was given a perspective that isn’t really seen, and the business and logistic aspects of a sport have influenced her career choice.

“Being a team manager definitely persuaded me in wanting a career in sports management,” Rene said. “I didn’t know what I wanted to be beforehand. I like the business, and I like sports so it’s pretty cool to be able to combine those things. I honestly don’t think that if it wasn’t for managing this team I would continue to have no idea in what career I want to pursue.”

Anderson describes his managers as “the unsung heroes” of the team. They are incredibly committed, and they always show up for the tournaments, help with the head table during our home duals, and make sure the scoring is done properly. They could easily be compared to being the bolts and screws that hold the moving parts of the team in place.

“We do so much more,” Rene said. “We’re not there just to mop the mats. We have more of a purpose. Us, managers, are apart a part of a family, a community that we happily give our aid too. I just wish people saw or knew how much we do for this family because we do so much more than [people] expect.”