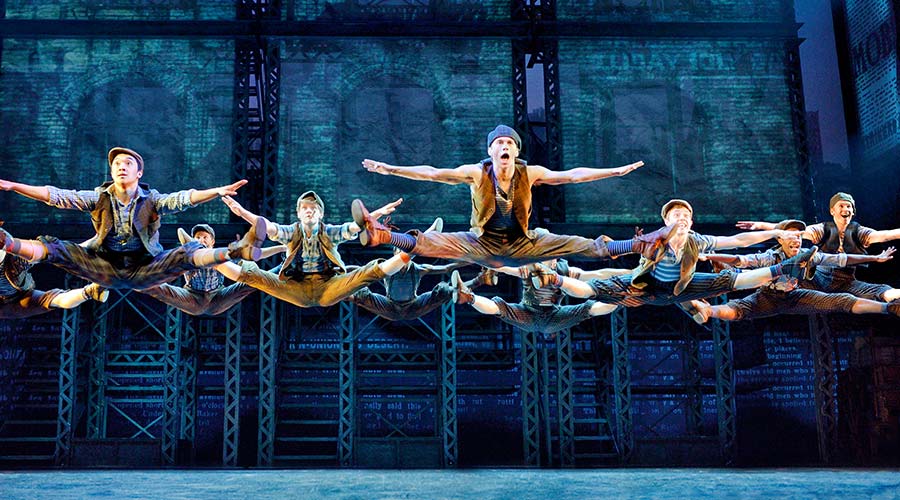 Start Spreading the News: Newsies Broadway is a Must-See

Newsies took to the stage for its first appearance Tuesday night in the Devos Performance Hall. Based on real-life events that occurred in New York around 1899 and on, the touring performance debuted in an area that couldn’t have been more perfect. Across the street is the historical building most people don’t give a second glance to: the old Grand Rapids printing press building. Similar to the New York newsies, Grand Rapids newsies were faced with poverty and harsh weather. Where the New Yorkers led a strike to fight the lowering of their already miniscule wages, though, Grand Rapids newsies sung their sorrows away. It’s safe to say many don’t remember the strike very well, a minor blip in the radar compared to the revolutionary strikes against newspaper presses occurring in larger cities.

That didn’t stop the musical Newsies from bringing in a large crowd, however. All but a few rows were packed with anticipation as the lights dimmed and the show began. I didn’t know until I had arrived that this was a Disney musical, and wasn’t sure what to expect because of it. Out came a large metal structure where newsie Jack Kelly, a charismatic but penniless orphan, and his (rightly named) friend with a bum leg, Crutchie. I never really grasped why they opened with a song about Santa Fe, or why Jack Kelly was so set on moving there as soon as he had enough money. The chemistry that the band of newsies has created a believable camaraderie. It also helped that the newsies had some outstanding dance numbers, most of which looked extremely tiring.

There are two things one can be certain about when going to anything Disney: there will be a lot of cheesy scenes, and the production will look expensive. Let me tell you, Newsies did not disappoint. The plot and script could have easily been the downfall of Newsies without an extraordinary cast. Disney went where no other production has gone; they took a very dark situation in history and made a family-friendly production about it. Kids and adults alike were fond of the show, although I’m not sure that the kids even realized that this was a history lesson in disguise. A bit different than Disney’s usual witches and curses about true love, but a good show at that.

The set was unlike any show I’ve ever been to.  Jack Kelly’s art appeared on the curtain behind him as he was drawing Katherine, his love interest. There were police after the newsies in one scene, who chased them up and down a large, intricate metal structure that spun fast enough so that you were just as dazed as the officers when the newsies got away. Structures transformed into completely different sets in the blink of an eye, with no trace of the scene before. If anything, I would go back to just get a better look at the enthralling (and no doubt expensive) set.

However, the characters were brilliant as well. I had been a bit nervous when the first scenes were a bit shaky, but after the first show jitters were out, the cast was on fire. Jack Kelly slipped into his role so well one might think he had been born to play it, and the opera owner Medda Larkin had the strongest stage presence and voice of the whole cast. Les, the youngest and most recent member of the newsies, takes on a large role as well, surprising me with how much maturity and talent he had.

Overall, Newsies was a musical well done that I would recommend to anyone, even those not typically inclined to theatre productions. With such a wide range of interest, from the elderly to the youngsters, Newsies has potential to become popular enough to join the ranks of fan favorites such as The Lion King and Les Misérables.