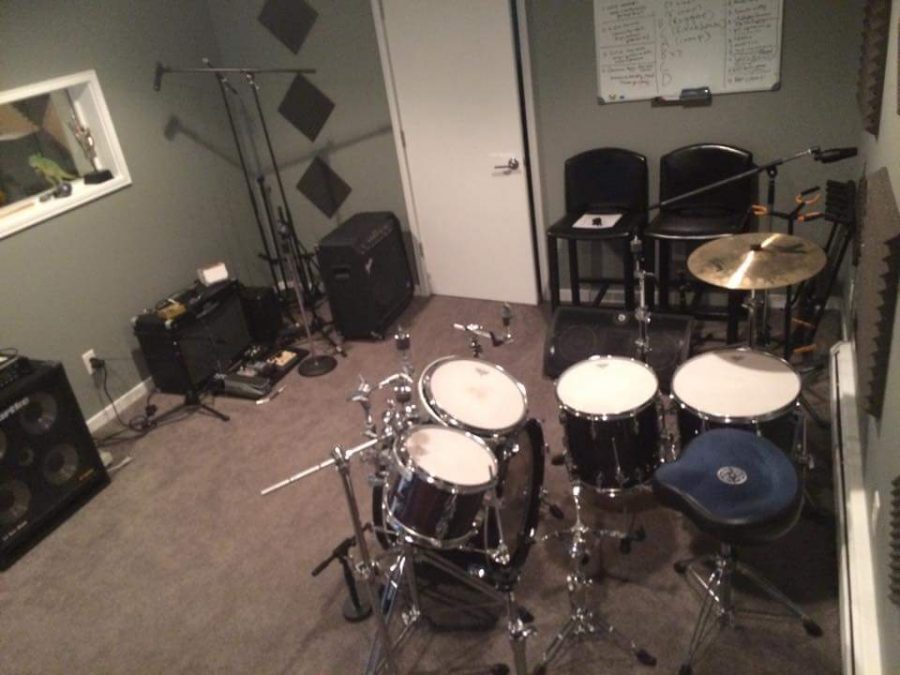 “These polyrhythms coming up are dope. This drummer’s on the highest level of drumming that there is,” says senior Geoff Brown. “This drum solo at the end is just insane. There’s this big five thing…”

He taps his fingers on the table, highlighting the song’s rhythmic groupings.

“All those are groups of five, but it’s in four-four [time] so it adds up at the end,” he continues. “He keeps the five and then he just goes into other things while still in four, and it’s just…”

Brown shakes his head, in awe of the music that is coming from his phone. It’s Snarky Puppy, whom he calls “the preeminent jazz fusion band.”

He continues listening to the guitarist. “Just the way that he navigates through the polyrhythms and keeps it funky is nuts.”

He pauses the song and jumps genres.

“[This is] Vulfpeck, which is just about as different [from Snarky Puppy] as it gets. It’s just simple four-four. This is my favorite bassist.”

As Brown switches the music again, a song by Animals as Leaders begins playing.

“Here’s another band that’s even more technical and polyrhythm-y. … This goes between 15/8 and 17/8 [time.] … It’s so groovy, even though it’s in such weird time. It’s so inspiring. … The way the drums accent it and then they go into a double time thing right here – they have such an amazing grasp of rhythm. It’s just incredible.”

Listening to music with Brown is an education in music theory and the fundamentals of genres which fall outside the musical mainstream, including (but not limited to) math rock, jazz fusion, ambient, and funk. Introduced to music when he was young, Brown is now a versatile musician who plays guitar, bass, upright bass, and drums, in addition to participating in the Symphony Orchestra and two jazz bands at FHC. The musical wallpaper of Brown’s growing-up provides a background for the music that he now records and mixes himself in his basement recording studio.

While Brown says that he grew up listening to his dad’s favorite music, (“Stevie Wonder and that sort of thing”) his true interest in music has its roots in an elementary school introduction to Green Day.

“In second grade this guy named Ben Spitters showed me “Basket Case” by Green Day on a portable CD player during indoor recess … and then I was like ‘I’m doing this,’” Brown said.

Brown’s love of Green Day’s punk rock next gave way to a preference for the metal sound of bands like Iron Maiden and Metallica. Today, Brown likes to listen to and play mostly jazz fusion and funk.

Looking back, Brown laughs at how much his musical taste has evolved. However, some of his favorite songs from years ago still resonate with him musically, though perhaps for different reasons than they initially did.

“I remember there was like a year period where I listened to the song “Godzilla” by Blue Oyster Cult every single day, but I think that was more because I liked the Godzilla movies than the actual quality of that song, even though listening back the quality of that song is very, very high,” Brown said.

One of the more recent developments in Brown’s musical career has been the construction of a music studio in his basement. Brown built the studio with the help of friends, tearing up carpet, installing foam, and putting holes in walls for cables. The studio has provided Brown with a space to record and mix music, some of which is on Soundcloud and available to the public for listening. Brown hopes to turn music production into a career later on and perhaps own his own recording studio, but for now, in addition to the hour minimum of musical practice he tries to get in every day, he is enjoying writing and editing songs (and, in one case this summer, a full-length album) with the equipment that he has.

It was in that basement studio that Brown wrote and recorded the album Pat Fuzzy this summer. Created with a friend from New York, the album is currently being mastered and will hopefully be released onto iTunes and Spotify within the next few months.

The journey to the album’s creation began two summers ago at a University of Michigan music camp. There, Brown met Bram Wollowitz, a current college freshman who stayed at Brown’s house for one weekend this summer and recorded music with him. Together, and under the name “Rad Dad & the Fat Pat Collective,” Brown and Wollowitz combined various musical genres to create enough material for a full album.

“[Wollowitz] plays drums, piano, and sings, and I play bass and guitar, so it works out perfect,” Brown explained. “We just sat in my basement and were like ‘hey let’s do this,’ ‘let’s do this,’ and ‘alright, let’s try that,’ and we did it. Since it was written in such a short amount of time, [the album] kind of covers a lot of genres because we ran out of ideas for all these different things. The main thing that we have is funk, and there’s ambient stuff, there’s one song that’s a spaghetti western song, … and there’s some weird reggae island [stuff] and some jazzier [stuff] and then some acoustic stuff.”

Wollowitz believes that the musical styles of the two “compliment each other” and that their common enjoyment of music allowed them to turn their extremely similar music tastes into an album.

“My musical tastes are really similar to Geoff’s in a lot of ways but we have enough differences to keep things interesting,” Wollowitz said. “The album stylistically is very funk based, with a few songs that are definitely more post-rock or post-punk oriented. Thematically, it’s not really polarized in any one way. The lyrical content is diverse and often more humorous than it is full of emotional intent, but I think it’s all really unified by like this idea of loving music and trying to experience things in a meaningful way and have that exist in the music.”

Creating a song comes with moments of both great challenge and great satisfaction for Brown. It’s a long process that “starts out with an idea, on a guitar or a bass or something.” That idea next needs a tempo, which is set on a metronome. That metronomic beat then becomes a guide for recording the song into a computer separately for each instrument (and twice, Brown notes, on the guitar). Drums are then added in to provide a more “funky” beat for the song. And finally, the metronome can be turned off and the song itself begins to take shape.

“This hasn’t existed before, but now I’m making it, pushing it into existence, when it was just in my head before. That’s really cool.”

“The moment when you get to turn off the metronome is awesome, because it’s like ‘Hey, this is a real song now,’” Brown said.  “It’s cool.”

The satisfaction of creating something provides Brown with great joy along the sometimes arduous, technical landscape of music production.

“I really like how you make something out of nothing,” Brown said. “It’s like, this hasn’t existed before, but now I’m making it, pushing it into existence, when it was just in my head before. That’s really cool.”

Brown’s high level of musical skill and passion has been inspired and improved by his involvement with various other artists, and itself now provides a challenge for peers that he regularly plays with. Junior Bennett Hendricks met Brown in middle school but started playing with him more frequently last year. The two share similar musical interests, and, according to Hendricks, playing with Brown has aided his musical development.

“Geoff has a wealth of musical knowledge. His chops as a guitarist are incredible,” Hendricks said. “Playing with Geoff has helped my growth as a musician tremendously. I’ll definitely miss writing music with [him] next year; he’s always pushing the envelope, looking for new sounds.”

The kaleidoscope of sounds that color Brown’s everyday experiences, the sounds of bands such as Vulfpeck, TTNG, Chon, Snarky Puppy, and Hiatus Kaiyote, provide him with a source of inspiration for new music of his own. Brown says that each song he creates is truly a combination of other songs that he’s listened to.

“I listen to a lot of things, and I like to take influence from all these different types of music and then kind of bring them into one,” Brown said. “It’s kind of like when you read or write. When you write, you take these different fragments from different authors, and [with music] it’s like ‘I’m going to steal this line from Joe Dart, and I’m going to play it like Thundercat plays it, and then I’m going to put a weird sweepy-doo-da from Tosin Abasi right here, and then put in this kind of chord that I stole from Chon.’”

While Brown’s story is one of creating sound, it is, perhaps more importantly, one of listening. While he no longer directly draws inspiration from Stevie Wonder, Green Day, or Iron Maiden, their sounds brought Brown to his current musical identity, one that is continually challenged and improved by the music he surrounds himself with.

“It just inspires you to push yourself,” Brown said. “[My music] is just an amalgamation of all the stuff I listen to.”