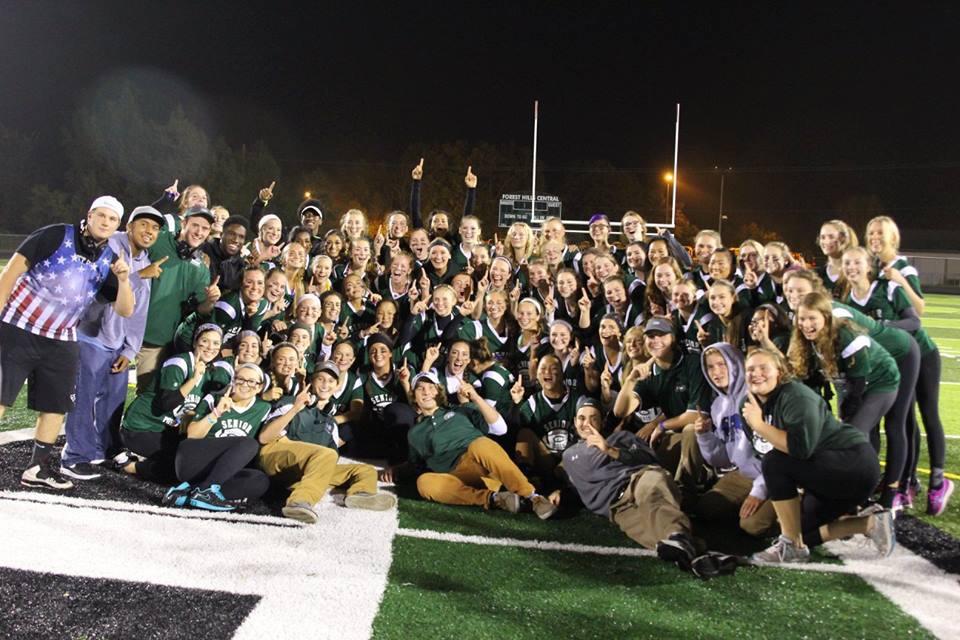 The rivalry between the juniors and the seniors has been broiling these past couple weeks, with student section debates and rumors of a hit list. Students throughout the school were excited to watch the girls compete. Powderpuff is a tradition that goes back years and shows us how competitive girls can really be. It’s played around the nation and the game never disappoints, with last night being no exception.

“The senior student section was packed and everybody was yelling,” said senior Brendan Dunn. “People were so excited to be there and cheer on the girls. It was just so much fun to watch the senior girls destroy the juniors.”

This year seniors proved to be victorious yet again with a score of 30-12. As the seniors scored a touchdown on the second play the juniors did not give up.

“Although we lost, I think everyone had a good experience and we had a lot of fun,” said junior coach Sal Sidebotham.

After being down by 3 touchdowns, junior Bailey Korhorn put on the jets and scored a touchdown the first play of the second half.

”The feeling of scoring two touchdowns was unreal. Running into the end zone and looking behind you and seeing all the coaches and student section going crazy was one of the greatest feelings. It was awesome to make the coaches and the junior class proud,” Korhorn said.

Korhorn was the only junior to score. On the other hand, the seniors had multiple people score, including senior Cassidy Terhorst who scored two touchdowns.

According to Terhorst, she couldn’t have done it without her blockers including senior quarterback Mackenzie Yob, who all worked together in order to get a touchdown and overall get the W.

“It was a fun night,” said senior football coach Matt Mills. “I was nervous before the game but I was confident that our girls were gonna pull out the win and they did.”

Korhorn believes that the junior team did pretty well for their first time out on the field. They had some great runs and tackles against the seniors and that she is very proud of their effort. If we improve on a couple aspects, we will definitely get the W next year.”

Although the juniors couldn’t pull out the win, Korhorn is optimistic about next year.

“I am super excited for next year going out as a senior will be even better than this year. junior powderpuff was a learning experience for us and the sophomores better be ready for us next year. Powderpuff allows you to become really close with all your teammates and coaches and I can’t wait to do it again.”

Korhorn is not the only one that was looking forward to next year. Sidebotham shares, “I think that our girls are gonna take it a lot more serious than they did, I think that they are going to be a lot more prepared, they aren’t gonna be as scared. So I think overall next year will be a better game and we will continue to have fun.”