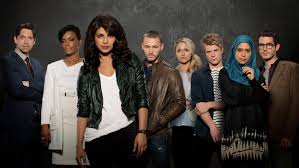 Last year, ABC made the decision to cancel its thriller Revenge. It had been on for 4 seasons and had filled the Sunday 10 o’clock time slot for 3 years. When it ended, there was a hole in their schedule and nobody knew how they were going to fill it for some time.

This changed when the commercials on ABC starting advertising for the new show Quantico. The show is based on the FBI Academy located on in Quantico, Virginia, where training for new Special Agents and Intelligence Analysts of the United States Federal Bureau of Investigation is held. The main character is Alex Parrish, an ambitious FBI recruit who, after becoming the prime suspect in a major terrorist attack in New York City, must figure out which of her classmates was actually responsible (played by Priyanka Chopra). Quantico shifts between the present, with Alex on the run from authorities, and her past memories of training with fellow recruits.

Quantico has already surpassed NBC’s Allegiance and Homeland for pilot views and continues to climb ranks. Quantico was recently ranked as Sunday’s No. 1 broadcast entertainment program in Adults 18-49, improving the 10 o’clock hour for ABC by 46%.

One reason these ratings are so high is because there is someone for everyone. There are  many types among the recruits — the little white rich girl, the cocky kid with connections, the witty Muslim twins, a half-white, half-Indian confident women, a Mormon with a secret, and many more.

One of the only negatives of the show is that it has plots on plots. It is extremely preoccupied with plots. Because of this, it never slows down and pauses to give fans a real reason to care about any of these characters or the overall plot. Although it is packed full of action and surprises, at 10 o’clock you need a tv show that will keep you engaged instead of thinking, and this show definitely makes you think.

As of right now, however, this show works well enough in that time slot to keep rising in ratings. After only four episodes, it has some characters fans could grow to like, and it has a pretty interesting basic set-up that could work if used correctly, so the series shows great promise. Overall, Quantico has easily taken the spot of the aforementioned Revenge, and will most likely continue to grow in ratings and popularity. Personally, I can’t wait to see what happens.