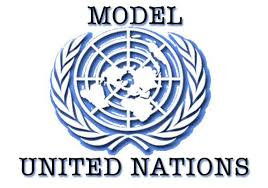 Model UN: a class that has ultimately inspired the metamorphosis of senior Kate Kovachevich; who, in the last two years, has effortlessly transformed from a shy, timid underclassmen into a self-assured, expressive leader.

When Kovachevich first entered room 219, she nervously slid into a seat, her eyes darting from side to side as she desperately searched for a familiar face to ease her anxiety. Although the class itself was both small and intimate, a majority of the students surrounding Kovachevich were loquacious seniors who had several years of experience tucked under their belt. To them, Kovachevich was simply a tiny sophomore with big aspirations.

She refused to let this intimidate her, though.

She sat up straight that first day of Model UN, a determined expression plastered on her face, somehow managing to conceal her apprehension with confidence.

“When I first joined the class, I was definitely reserved,” Kovachevich said, in a rather reminiscent manner. “Model UN is centered around the concept of public speaking, so at first, it was difficult to step outside my comfort zone, stand in the center of the room, and just talk.”

Now, however, Kovachevich is more than happy to do just that. She saunters to the front of the classroom, clears her throat , and intrigues the audience with her intentional eye contact and assertive demeanor.

And Model UN has significantly contributed to that evident change within her.

A clipboard is passed around from hand to hand, making its way through the media center every Thursday evening. Approximately fifty signatures are scribbled down on a sheet of paper, signatures that further validate the class’s unorthodox setting. Due to the fact that the class is held once a week at 6 PM, attendance is crucial. Each individual student is responsible for showcasing their personal dedication to learning, and they do this by earning 90 hours- both inside and out of the halls of FHC. After being accounted for, a meaningful discussion will take place. It’s a discussion regarding world news, one that could last anywhere between ten minutes to a half hour.

“We aren’t talking about events that happened 200 years ago,” senior Brooke Bacigal stated passionately. “We’re talking about what happened yesterday. We’re talking about who those events affect, how they happened, and what we can do to fix them. Model UN breeds the next generation of innovative thinkers and problem solvers. And the class doesn’t just end with the bell, so to speak. You think about the topics being discussed well after you leave the classroom, you research world news from the comfort of your own home, NPR ends up as one of your presets, and the level of global consciousness this class inspires sticks with you for the rest of your life.”

As said best by Bacigal herself, the class is one that simply inspires others.

When the students in it are not engaged in serious discussions regarding sophisticated subjects such as politics and international relations, they are hunched over tables with their heads buried in large books, cups of caffeine pushed off to the side. A majority of Model UN is spent researching; students are assigned their countries two months in advance so that they are allowed ample time to prepare for upcoming conferences. The class as a whole often travels to both the Great Lakes Invitational Conference- which occurs in the middle of November- and one which is held at the University of Michigan near the middle of January.

While the conferences prove themselves to be strenuous and demanding, Kovachevich stated that preparation is key. Realizing that “you get out of it what you put into it,” Kovachevich spent over 30 hours assembling her position for one particular conference. You tend to lose track of the time with your eyes glued to a computer as you desperately attempt to memorize your specific topic, both your opponent and allie’s stance on it, and what you plan to do to solve the problem.

However, the mentality among the students during competitions seems to be “work hard, play hard.”

“Traveling with the same people for days a time brought us all closer together,” Kovachevich said. “Imagine this. You’re in this strange hotel room in a strange city with hundreds of kids you don’t know all around you. When you’re out of your comfort zone like that, all you want to do is stick together with the people that you do know. You just want to stick together with the people you’re familiar with.”

The current bond shared between the students of Model UN is evident; however, near the beginning of the school, things weren’t so unified. The class size of over 50 individuals is the largest it has been in decades; this made it quite difficult in terms of making sure everyone was on the same page with one another at first.

During the first couple of meetings of Model UN, everything seemed both scrambled and chaotic as members of the executive board struggled with teaching newer faces complicated tasks such as how to compose resolutions and the proper way to conduct themselves (“parliamentary procedure”) during conferences.

Model UN places an exaggerated emphasis on both elegance and decorum; you can’t speak over another delegate, you have to raise your placard to speak, and you must motion in order to set a caucus. These little terminologies and strict rules may seem overwhelming at first; however, with time, they easily become second nature.

With time, things gradually become easier. With time, you begin to appreciate the little things Model UN has to offer each individual student.

“The atmosphere is really unique because it is so unlike any other class,” Bacigal remarked when questioned about what the club has done for her particular. “It’s later in the evening, and it’s primarily student led. You’ll have kids eating dinner while they debate what should be done to aid Syrian refugees. And while McClees facilitates the class and interjects every so often, the class is ultimately run by students. We get out of the class what we put into it.”

And for Bacigal, what she’s gotten out of the class has been invaluable. According to her, not only has it helped build up her confidence in her public speaking abilities, but it has also helped her become more confident as a person.

Advisor Christopher McClees agrees that Model UN has allowed students to become more aware about what is happening around them instead of solely choosing to remain in the “Forest Hills Bubble” we are so often criticized about. And this is crucial in today’s society.

“I believe that it is important for students to learn about these things and be able to make better informed judgments about matters of policy,” McClees said. “This aids them in gaining an understanding regarding how such matters can affect our everyday lives.”

Flashback to sophomore Kate Kovachevich, who used to nervously raise her hand during a discussion quietly state her opinion on the topic. Now flash forward two years and you’ve got a sophisticated, confident young woman who commands the attention of the room with every perfectly pronounced syllable. I think it’s safe to say we have Model UN to thank for that.