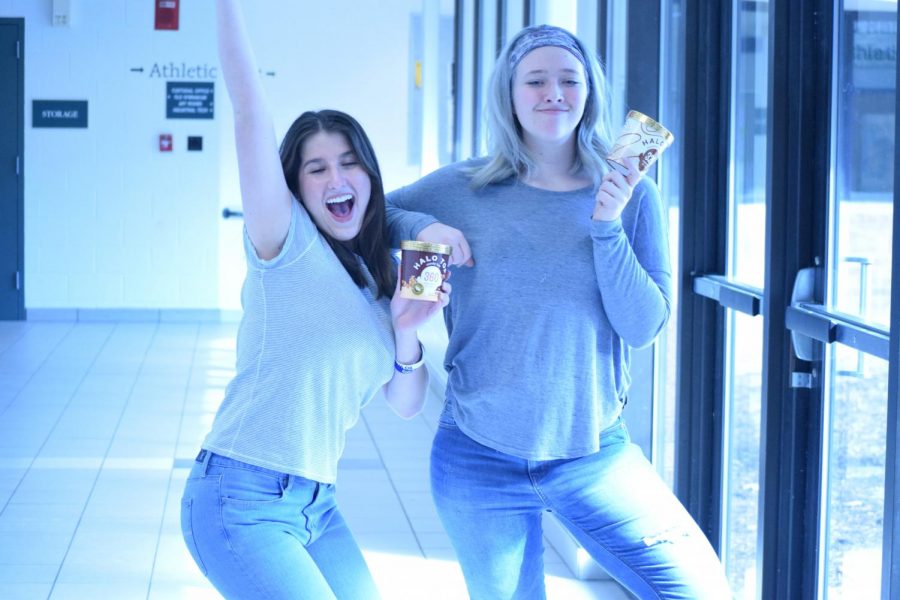 I decided to tackle the three-day Halo Top Diet with a dairy-free twist. My goal was to eat mostly dairy-free products to see my results. I would be keeping track of not only how much I ate, but also my macronutrient count, calorie count, and overall weight loss. I am not usually a dairy-free eater, but this seemed like a unique experience that I wanted to try.

I woke up in the morning and told myself that this still seemed like a good idea. I drank my coffee and headed to school. I was excited and hungry for breakfast at around 10. I opened up my first pint of Dairy-Free Vanilla Maple, containing 280 calories a pint, and hoped to get a breakfast flavor. I, unfortunately, disliked this flavor and only ate half. However, I appreciated the real vanilla bean flakes in the flavor. I decided to save the rest for lunch. This was in part because I only brought two pints to school and didn’t want to torture myself all at once. Directly after eating half of the Dairy-Free Vanilla Maple, I ate my only dairy flavor of the three days, Pistachio, which has 240 calories a pint. I became obsessed with this flavor and the subtle nutty flavor. I ate half of the pint right away for breakfast and saved the rest of the pint for lunch along with the Dairy-Free Vanilla Maple. I finished up the two pints together for lunch. I felt completely fine and waited until I got home to consume the next pint.

I ate Dairy-Free Peanut Butter Cup, which has 280 calories a pint, before leaving the rest for the afternoon. I didn’t feel too hungry, but before I left to go out for the night, I decided to eat the whole pint anyway. This flavor ended up being one of my favorites, and I ate it quickly. I felt completely fine after and hoped this contained enough to fuel me for the rest of the day.

I could not have been more excited to eat pint number four. I had just sat through and watched my entire basketball team eat at an Italian restaurant, and I had to sit for two hours and eat nothing. Zip. Nada. I experienced all the smells and sensations and had to sit there knowing I couldn’t take a single bite. As soon as I walked through the door, I grabbed the first pint I laid eyes on and dug in because I was starving. I quickly snagged Dairy-Free Toasted Coconut, which contains 320 calories a pint and ate until I was full. I saved the half of the pint left over for tomorrow and headed off to bed.

Day One Thoughts: I felt absolutely fine. I’m not experiencing any hunger, feelings of sickness, or bloating. After day one, I thought the next two days would be a breeze. Oh, how wrong and naive I was.

I woke up on day two looking incredibly skinny by my standards. I’m not sure if it was just a psychosomatic occurrence, but I’m pretty sure I was less bloated than how I usually look. Since I woke up at almost 11, I waited a few hours to eat a brunch pint. I decided to dig into Dairy-Free Peanut Butter Cup, which has 320 calories, because it was my favorite from yesterday and sounded the most appetizing. I ate the pint super quick, and I was still hungry, so I dove directly into another pint. I chose Dairy-Free Cinnamon Roll, weighing in at 360 calories a pint. I was still really hungry after sleeping in and not eating, so I devoured half a pint. After I ate, I started to feel a little bit queasy. I was going to attend a concert that afternoon, and usually before concerts, I tend to not eat because of nerves. I think my body was not used to eating before big exciting events, so I only made it through half a pint, and that fueled me to the end of the day. I left my house at around 3 PM and didn’t return until midnight and was not hungry at all when I came home.

Day Two Thoughts: At my concert, I could not stop shaking after being in the cold. I noticed all the people around me warming up quickly, but I could not retain heat for the life of me. My stomach was starting to hurt a little bit after eating some Dairy-Free Cinnamon Roll, but I place the blame on my quick eating. I know I should have eaten more, but my stomach was not necessarily cooperating today.

Day Three: Even after downing my morning coffee, I was super hungry. This is probably due to the fact that I completely underate yesterday, and I decided to consume the two half pints I had left of Dairy-Free Cinnamon Roll and Dairy-Free Toasted Coconut. Totaled, that made up around 340 calories total for breakfast. I ate the two pints in sadness because now all the treats were beginning to taste the same to me. My taste buds could no longer differentiate the flavors from one another and that, my friends, was tragic. I looked in the mirror and noticed I was starting to bloat. I then continued on with my day by sitting on my couch for a few hours contemplating my life choices and wondering how I ended up here. I became hungry a few hours later and decided to eat a pint of Dairy-Free Candy Bar. My friend with me on this adventure recommended I save the 360 calorie pint for the last day so I could have some crunch in my diet. I ate this one and absolutely loved the flavor, and I was so glad my taste buds were able to savor in the chocolatey taste. I started to feel queasy around half-way through the pint, but I was so hungry, I continued to eat. I finished this pint and felt completely sick to my stomach. I spent the next few hours not eating at all, because I was so scared I was about to vomit. My stomach felt completely unsettled, and I was unsure if I could eat anymore for the rest of the day. However, I started regaining a feeling of hunger hours later and ate Dairy-Free Caramel Macchiato at 320 calories a pint. At this point, I felt nothing. I was completely numb to all eating experiences. I was so sick of this sweet, cold, and creamy concoction, and that is something I never thought I would say. Still feeling nauseous, I called it a day and closed my freezer.

Takeaways: I would not recommend this to anyone. Sure I lost the weight, but was it worth it? I felt disgusting. At the end of day three, I was completely bloated, felt the need to constantly run to the bathroom to ensure I didn’t vomit on my carpet, and quite simply, I felt disgusting. There are so many safer, healthier, and better ways to not only lose weight but to keep it off. But that being said, I was kind of shocked looking at my macronutrients each day. My calories were coming from 56% to 58% of carbs daily, between 29% to 34% of fats each day and ranged from 10% to 14% of protein daily. I was surprised I wasn’t getting more protein in, but then quickly remembered basically all I was eating was coconut milk. I did learn, though, that Halo Top offers some delicious vegan and dairy-free options for those unable to eat regular ice cream. Some of my favorites were Dairy-Free Candy Bar, Dairy-Free Peanut Butter Cup, and Dairy-Free Caramel Macchiato. I would recommend you try to find a pint of those to enjoy today, but I would not recommend you eat nothing but that for three days. All in all, this experience was fun. I would never repeat this or tell anyone to try to imitate this, but I would say that Halo Top has so many great alternatives for those who are vegan or unable to eat dairy. So eat a pint of Halo Top, but please don’t eat more than ten.