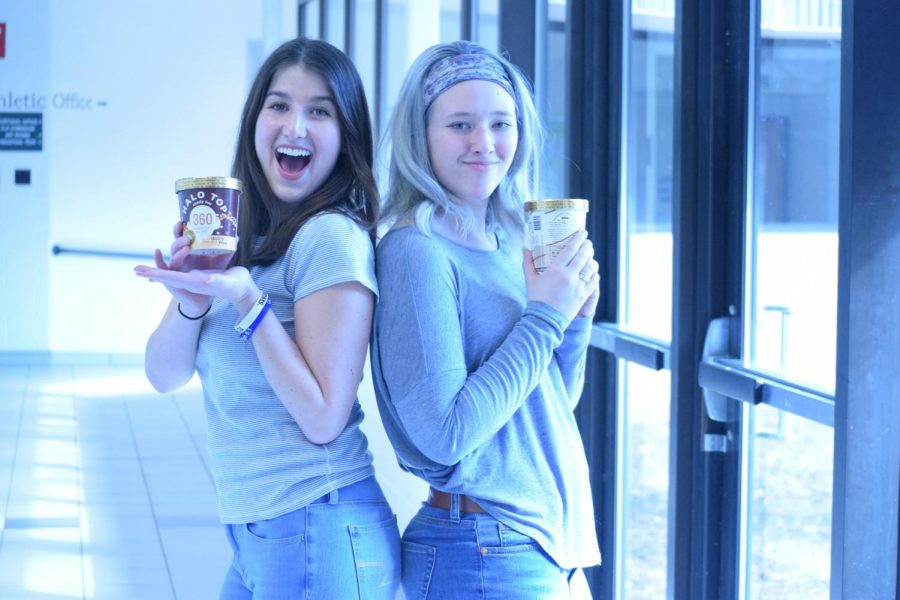 This was probably the worst ice cream flavor I have ever consumed. It probably doesn’t help that I hate syrup, which is the main flavor. My car still smells like syrup.

This one was exceptionally good. It had the perfect crunch from peanuts, and I highly recommend it; it’s super convenient that I have two more pints. Although I did very much miss solid food, and that was only pint two.

Looking back at it, this may have been my favorite pint. The brownie chunks in this one were by far my favorite part and made it feel like I was actually eating food. It was super creamy and very yummy. Although, everyone else was eating spaghetti for dinner, and that was sad to watch.

This was a good start to the day because I started off neutral. I definitely think that the chocolate-based ice creams are better than the vanilla; something about it makes it taste more like a pint of Ben and Jerry’s (but much less rich, and that’s definitely a good thing). (Side note: eating ice cream during choir is not an easy task.)

This one was also very good, and I’m not one to like peanut butter– but there was something about this one. Although by that point, I was getting pretty sick of the whole “ice cream for every meal of every day” thing. I was also getting sick of the crazy looks people would give me as I would parade around shamelessly finishing an entire pint of ice cream in less than half an hour– but it’s whatever.

A continuous fan favorite by me and everyone else that was stealing spoonfuls. I also think there was something about the third pint of the day because it was, again, the pint to go down the fastest. (We timed ita�� seven minutes)

This one wasn’t my favorite, but it was still decent considering the fact that I was really losing it at this point. I seriously do not recommend eating ice cream every day. Also, the realization that I had consumed eight pints of ice cream in less than 48 hours sent me into a bit of a mental breakdown, but a few pieces of gum and a big cup of coffee (the one drink I allowed myself to drink besides water and milk) fixed the problem.

I started off the last day with something I knew I really liked because at this point I was seriously struggling. I didn’t even finish the pint. However, the ice cream was still good. Halo Top seriously does a good job at making their ice cream. I don’t know how I could have gotten through it if it wasn’t pretty much perfect. But honestly, I was pretty angry I still had a whole day left of ice cream.

Lunch was a little bit better than breakfast, but seriously, at this point I had eaten ten pints of ice cream in two and a half day. TEN PINTS!!! I was ready to eat real food.

This one was my second least favorite, but I suppose it was fitting to start and finish with bad flavors.

Note: I did not eat the fourth pint on the last day because, by that point, I was about ready to lose my mind. So, I weighed myself one last time around 8:00 PM and then ate a real meal (a burrito bowla�� it was very good).

Takeaway: This was terrible. I would never, ever suggest this to anyone, especially considering the fact that I was angry the entire time. No one is made to eat the same food every day for three days, especially when that something is dairy. I honestly don’t think I would have gotten through it if the food was anything but Halo Top. Honestly, for being that low in calories, this ice cream is exceptional. I do not, by any means, have a sweet tooth, so this is a major kudos coming from me. All in all, don’t ever try the diet, but I highly recommend you pick up a few pints on your next trip to the store.