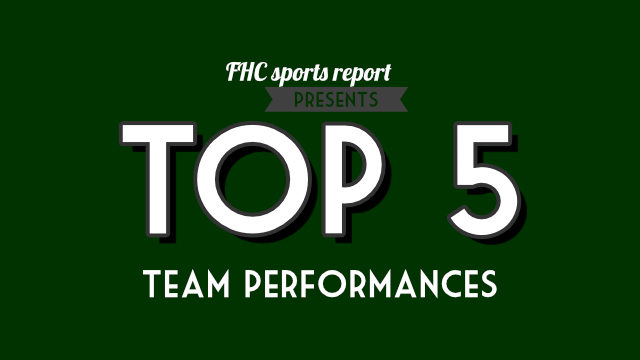 In one of the best wins in head coach Ken George’s career, the boys varsity basketball team took down a top-five team in the state 72-68. Godwin Heights featured a dynamic senior duo with Lamar Norman and Markeese Hastings. They are both four-year varsity players who will play division one basketball next year. Markeese is committed to Butler University while Lamar is uncommitted. The Rangers came into the game off of back to back wins against Forest Hills Eastern and Spring Lake. Beating an undefeated Spring Lake team by 27 points fueled the confidence heading into the Godwin Heights game. The game started with Markeese knocking down two early threes, and silencing the packed Ranger student section in Cornerstone’s gym. It was Christmas break, but the energy was still electric. With Godwin Heights comes a crowd. After an up and down start, the Rangers trailed by 5 at the half. Sophomore Jimmy Scholler carried the load throughout the first half. Jimmy, who had a rough start to the season, came out of his shell in the Cornerstone Holiday Tournament. He recorded his first 10 point game of the season against Spring Lake in that tournament. Against Godwin, the tough sophomore led the team with 20 points.

“It was a big statement game for us,” Jimmy said. “We knew what we were capable of, but we needed to show everyone else.”

The second half was up and down once again until a string of plays put together by the Rangers tied the ballgame halfway through the fourth quarter. With 45 seconds left in the game, Tyler George made a 35-foot shot to help force the game into overtime. The Rangers pulled away in the overtime session to hand Godwin its only loss of the season.

This past season will go down as one of the best years in Ranger football history. After finishing 9-0 in the regular season, the Rangers found themselves in the playoffs in back to back years. There were many thrilling games that kept the community coming back, but none bigger than the district final against Muskegon Mona Shores. The Rangers were granted home field advantage, but Mona traveled and other schools came to watch. The hype leading up to the game was enormous as tickets were sold multiple days in advance. The students who wanted to sit in the front row of the student section had to get there an hour early. Mona was the favorite and many people even had them winning the state title. The FHC community still had faith. Senior Kade Shomin had as much belief in his team as anyone.

“We had been eyeing this game all season,” Kade said. “We knew we could win and that was all that mattered. Coach Rodgers prepared us for a moment like that all season.”

Mona seemed to move the ball with ease in their first two possessions. The Rangers, however, were able to hold their own both times inside the five-yard line leading to two straight missed field goals. The halftime score was 14-7 Mona Shores. The Rangers did not come out rattled after the first half deficit. FHC quickly tied the game up with a swing pass to junior Cam Deines out of the backfield. The Sailors looked eager to retake the lead, but senior Kade Shomin had other plans when he jumped an out route and took it back for six. The score was now 21-14 and the momentum belonged to the Rangers. After this play, the Sailors just could not figure out a way to get it done on offense and the game became a tough defensive battle. Junior Tate Hallock then caught a hitch and go pass and took it to the end zone. The score, 28-14 now, looked like an imminent Ranger victory based on the way the defense was playing in the second half. Mona was able to cap off a drive late in the game for a garbage-time touchdown and the Ranger offense converted on a few late third downs to seal the victory. Excitement and pride were at an all-time high in Ranger Stadium.

In tennis, the difference between division one and two is huge. The Rangers are a top-five team in division two and Bloomfield is top five in division one. The tournament included another big-time tennis school in Brother Rice, who Jack and Peyton also defeated. It was nowhere shy of 90 degrees outside and it affected Peyton from the get-go. He was dehydrated and dealing with cramps. Bloomfield Hills was off to a strong start and seemed like they were going to cruise to another win. In the first set, Bloomfield pulled away after being energized when they hit a winner down the line. For those who know tennis, it was a ridiculously tough play. On the courts next to them, doubles and singles matches were going on. The Rangers were falling left and right to Bloomfield Hills in quick matches. Meanwhile, Jack and Peyton were in an absolute dogfight. The Rangers stole the second set in a true grudge match. Peyton was still battling dehydration and Jack was just as gassed. It came down to a third set tiebreak. The experience of Jack and Peyton paid off and the Rangers came out on top. Jack came into the match with a win-win mentality.

“We went in with a nothing to lose mentality and got it done against them,” Jack said. “It was definitely one of the wins I would say I’m most proud of.”

The varsity girls basketball team made quite the turnaround in the second half of the conference season. The biggest win of their second half was over the conference-leading Lowell Red Arrows. After losing by 18 in the first matchup at FHC, the Rangers were able to win in gutsy fashion the second time around. Their improved gameplan, the execution, and more fight are what got it done. Lowell’s Cassie Dean was on fire in their first meeting, and coach Prins knew she had to make some adjustments. Senior lock-down defender Breanna Probst was the ingredient the Rangers needed to slow her down. Breanna, a two-year varsity player, was able to face guard opposing team’s best players throughout the past two years. This was an assignment she was getting used to. Senior captain Emma Yoder knew they were going to have to change some things the second time around.

“The first time we played Lowell, they beat us pretty bad,” said Emma, who is in her third year on varsity. “In the second game we knew we were going to have to play hard and as a unit, and we did.”

Emma thought everyone made an impact in this one, and tributes that to the win.

“Every player touched the ball every time down the floor,” Emma said. “Our defense was really strong and everyone finished with at least 4 points.”

Claire Baguley and Madi Winter were the dominant floor generals that they are used to being. Madi and Claire have been up on varsity since their freshmen year, and that type of experience came in handy in a game like this. The Rangers went up early, and Lowell wasn’t going to go away. Throughout the second half, Lowell made multiple small runs to try to come back, but the toughness and grit of the Ranger defense held strong.

It was the best year of field hockey in school history, and it was capped off in dramatic fashion. The Rangers faced off against University Liggett in the state championship, who was the only team to beat them in the regular season. Liggett defeated the Rangers 1-0 in their first matchup. The game started slowly until junior stud Madison Bruno put one in the back of the net to give the Rangers a 1-0 lead. Then, the defense that only gave up a handful of goals all season held strong. The Rangers fended off Liggett until late in the game. Liggett finally got one past Senior goalie Molly Growney to knot it up at 1-1. Both teams battled until the final whistle, but regulation ended 1-1. The game went into a seven versus seven sudden death overtime. Liggett started with possession, and then junior Madison Bunke stole the ball and went down the field and drew a foul. The Rangers now had a corner from Madison Bruno, who snuck it in for the game-winning goal.

Senior Elysee Gerondale was a crucial part of the teams success, and was ready for a moment like this.

“Every game throughout the season we were told to play like it was the state championship,” Elysee said. “Finally we made it to our goal.”

When it came down to the end, Elysee knew they were prepared.

“Once overtime hit none of us were scared,” Elysee said. “43 seconds later we won the state championship.”