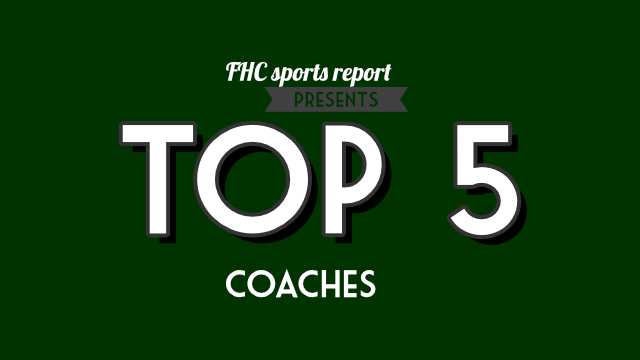 Ken George has been the varsity boys basketball coach for 24 years and led the team to an 18-3 record this season. The Rangers won the conference championship and were victorious in the last 18 games of the regular season. George started coaching when he was 25 because he really wanted to try to give kids experiences they would remember for the rest of their lives. He has totaled more than 330 wins in his coaching career, including 9 conference championships, 5 district championships, and 3 regional championships. George said the best part about coaching is when players come back to games or keep in touch with him. George tries hard to focus on every player and he tries to make Rangerball more than just games and practice; he likes to help players understand that they are playing for something bigger than just basketball.

“It’s not just all the on-court things that most people see,” said Tyler George, a co-captain on this year’s team. “There aren’t really any better in-game managers than him in terms of the X’s and O’s of basketball, and what makes the program great is all of the other stuff that he does off the court, all the stuff that Rangerball embodys. There’s really no other program like it in terms of the offseason things we do as a team. He’s also a really good motivator; before each game and in the game he has a lot of belief in his players which I think is something a lot of coaches lack, especially at the high school level. He really gives a lot of the freedom to us and he believes that we should be a player-coach team.”

Thirteen-year head coach for boys swim and dive and one-year head coach for girls swim and dive, Dennis Neat was able to have an undefeated season for the boys and was able to place second in the conference for girls. He also carried large rosters of swimmers to the State Meets for both teams. The reason for the team’s success is his philosophy that everyone plays a key role in the team’s success and not one person is better than the other. The compassion and respectfulness he shows to every athlete impacts how the season will play out. His enthusiasm also plays a huge role in guiding the swimmers to be the best they can be. He believes that in swim no two seasons are going to be alike, so he looks at the team’s potential and tries to build upon what they need to do in the future each year.

“I think Coach Neat should be selected as a top five coach because of the relationship he makes with the boys,” senior co-captain Matt Wilson. “If you are new to the sport or have been swimming since you were young, he will talk to you about it with full content. If you are working hard, he’ll let you know. If you aren’t, he’ll let you know that too. He also isn’t just about the season. He’s about the learning, training, and developing out of the season the right way and being prepared for the things that aren’t just swimming related.”

Seven-year head football coach Tim Rogers led his team to an undefeated regular season and into the state semi finals this year. Rogers has been coaching football for 30 years, 17 years of college football and 13 years of high school football. Rogers said that the team’s success this year relied on the players’ ability to be coached. This season his coaching and the willingness of the players played a key role. Rogers, with the presence of his assistant coaches, pushed the players to be the best they could be and that resulted in the phenomenal season they had this year. Not only does Rogers love the game of football, but he loves what it teaches to the young men that join the program. He says it teaches them how to become adults and how to be successful in life. It also teaches them how to be better fathers, husbands, employees, and employers because football makes the players put in work and have dedication, ultimately shaping how they live the rest of their lives.

“I think everybody can see he has really changed the football culture around FHC and he has a lot of respect for the program,” senior co-captain Jace Thornton said. “People have finally bought into what he’s been trying to preach to us these past few years and we went from earning a district title to a regional one. Now [the program] is only going to move up from here. He’s great; he’s taught us a lot more than just the game of football, he has taught us how to be men and we really appreciate him for that.”

Two-year varsity girls basketball head coach Kristina Prins led her team to second place in the conference and into districts both years she has coached. For just starting two years ago, Prins has made a huge impact on the girls basketball program. This year the varsity team’s record, 14-7 overall and 10-2 in the OK White Conference, showed how much work she has put into being a coach. Last year the Lady Rangers had a tough start to the season with their record being 1-8 as the team took time to adjust to the new coach. However, Prins and the Rangers were able to turn it around and went on to place second into the conference and make it to the district finals – a game they lost by one free throw. Prins, just having completed her second year coaching at FHC, has already noticeably changed the girls basketball community.

“I feel like she is a coach that cares about her players,” senior co-captain Emma Yoder said. “If you’re having a bad day she will come over and pick you up. She just really knows how to motivate each and every one of her players and motivate the team as a whole. One thing I love about Kristina is you can see from the first year to the second year that the chemistry and values that she instilled in the program are so important and I think that gives her a uniqueness.”

Twelve-year varsity field hockey head coach Andrea Shaner’s “no self-praise” approach has made her well-respected throughout the FHC field hockey program. This past fall, the team only suffered one loss while only giving up 5 goals all season. She also led the team to a State Championship win in overtime. The individual approach she has taken throughout her career with each of her players creates a special player-coach bond during the season. The numerous successes of her team show her dedication and the ability of the outstanding staff she has hired underneath her. She has had back-to-back final four appearances in the last two seasons.

“I think that my coach is a great candidate to be a top-five coach. We won our division and states, and she had a lot of camps for us to get there,” said senior Elysee Gerondale, who was a senior mid-back on this year’s team. “She always put the team first and she made sure we always knew what was going on during practices and games. We also had notebooks to write down our weaknesses and what to improve on. Overall, she is a great person and a wonderful coach.”