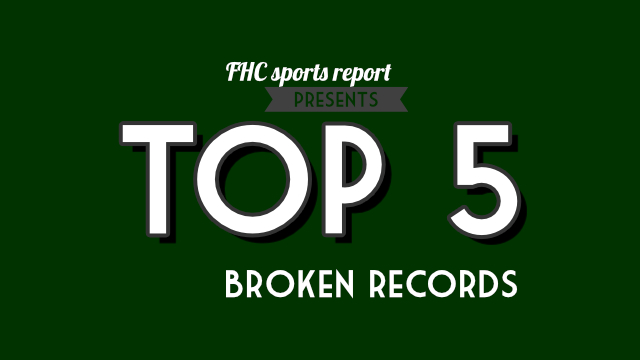 Senior Tyler George had an amazing game this winter against Ottawa Hills as he broke two records on the same night: most points in a game with 41 and most three-pointers in a game with 10. This outstanding performance from Tyler helped lead his team to a close 71-68 victory over the Bengals and was key in securing the Rangers’ conference championship title this year.

“I didn’t realize that I was on the way to breaking the records until late in the game,” Tyler said. “To break that record is special because of all the great scorers that have come before me. I’m just glad I had such great teammates that were always looking for me and finding me shots. It takes an unselfish team for a player to break that record.”

This fall, senior Colleen Kramer broke her all-time personal record in six-dive meets. Collen earned a new score of 273.5 against Catholic Central during their dual-meet season to help FHC defeat the Cougars 108-78. Colleen went on to win the Division 2 State Championship in diving and led the entire FHC dive team to place in the top 7 at the State Meet.

“Throughout the dual-meet season, I was close to my personal record but never broke it until the last three meets,” Colleen said. “When I did break it, I broke it by a lot so I was thrilled. I finally hit all six dives almost perfectly and it was so exciting because I felt like I was seeing improvement from all the hard work I was putting in every practice.”

The Forest Hills field hockey team had a historic year, as it went all the way and won the Division 2 State Championship. The team set division 2 and all-time Forest Hills season records for most goals scored with 82, goals against in division games with 3, and a goal differential of +79. The goals against and the goal differential records also tied records across all divisions. In addition, junior Madisyn Bunke set the record for career assists with 22 and senior Molly Growney set the single-season record for goals allowed at the goalie position with only 5.

“We have been so close to States the past three years, but we kept losing in the semifinals,” Madisyn said. “This year was the first time Forest Hills field hockey has won States and we were the first team on the west side of Michigan to win States. It felt amazing to finally achieve something we have been working toward for the past three years.”

Junior Jessica Schellenboom broke two Conference records this fall at the OK White Conference meet. Her new records came in the 100 Breaststroke with a time of 1:05.17 and the 200 IM with a time of 2:07.44. This was the first year Jessica has competed in the 200 IM, making the record all the more impressive.

“I honestly wasn’t expecting to get the records it was just an added bonus,” Jessica said. “I was just looking to swim fast and hopefully win, but when I heard that I got the two records I was really shocked because I didn’t even think about that being a possibility.”

The boys varsity basketball team has had a remarkable year, as it broke 8 both personal and team records and two players have reached top 5 and 10 rankings. In addition to setting new records for most points in a game and most three-pointers in a game, senior Tyler George had also reached the top 10 career scorers ranks, tied the record for highest average scoring per game in a career, and has broken the record for the highest career free throw percentage. Senior Ryan Dunn has also broken the record for most blocks in a game with 10 and has entered the top 5 ranks for most career assists. Additionally, many team records have been broken including most average assists per game with 18.9, most blocks in a single game with 18, most average blocks per game with 6.5, and fewest average turnovers per game with 10.6. On top of all of these accomplishments, the team has also continued the longest conference winning streak in Rangerball history with 18 straight league victories.

“At the start of this season, I decided on “Make Historyai??i?? as our team slogan because I thought this could be a season when our team broke a lot of records and left a legacy as one of the best teams this school has seen,” Head Coach Ken George said. “Their commitment and talent have led this group to set multiple records that have stood for a long time. I’m proud of them for working so hard and excited that they can reap the rewards of that effort.”