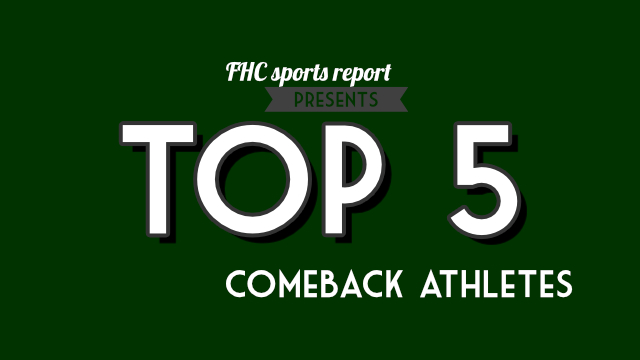 Senior Michael Peliotes was practicing for varsity football his junior year when he tore his PCL, a ligament in the knee. It happened on the lower turf during the Monday of the team’s first week of practice before the first game of the season. The team was in a 7-on-7 segment, and Michael was a receiver on offense and had a streak down the field. Michael jumped up to get the ball and fell to the ground on the front of his right knee. Michael got up with a weird feeling in his knee and thought he could jog it off, but with his second step his knee popped and he fell. Michael was out until the last game of the regular season where he was put in for a drive. That would be the only football he played his junior year. In his senior year, however, he started both ways in all of the team’s 13 games and was an all-conference honorable mention.

“It was a tough journey physically and mentally. All that hard work I put in before the season started felt like it was all thrown away after I hurt my knee. Luckily I still had my senior year to look forward to, and I used that as motivation,” Michael said. “My senior year I came out and played some of the best football I’ve ever played in my opinion. I was very proud of myself for the obstacles I overcame.”

Junior Kayley Reynolds broke the end of her tibia into three parts in her ankle on November 4, 2017 – right at the beginning of the ski season. Kayley’s left ski pre-released, causing her body to go forward and her right ski to go across her body, crushing her ankle. Kayley was out for four months after that injury. Kayley said skiing came back naturally to her; once she got back in the skis, it felt amazing. She made it to the National high school and USSA race in New Hampshire at the end of this season to compete amongst 135 girls, as well as going to the State Meet for the high school team.

“The feeling of coming back and making it to States was amazing because it was something I never really thought was possible for me this year because of my injury,” Kayley said. “Being able to come back and ski is really an unreal feeling.”

Senior Ben Finkelstein suffered a spiral fracture to his tibia his sophomore year while he was up at Nub’s Nob training for the 2016 season. The snow was all man-made and it was relatively warm. When Ben was making a turn, the tip of his ski dug in, throwing him to the ground while his body tumbled. Ben felt a kind of snap in his leg and when he tried to get up, an intense pain hit him. In his senior season this year, Ben led the team by consistently placing in the top three for both slalom and giant slalom. He was also the only member of the boys ski team to go on to the State Championship Meet.

Senior Emma Yoder sprained her ankle in her first scrimmage of the season this year. She was posting up on a girl in the paint and Emma’s foot went around her opponent’s and twisted weird. Projected to be on the sidelines for four to six weeks, Emma’s recovery remarkably only took one week. She only had to miss the first basketball game and was able to come back and play a little bit in the second game of the season. Her ankle didn’t truly heal until weeks into the season, but her presence on the court was essential to the team. She came back strong and became the Rangers’ leader in taking charges and was able to be a key player in multiple games.

“It was awesome to be back; emotionally it was just amazing to play again on the court with my teammates,” Emma said. “Physically it was excruciating because my ankle hurt up until our first game against Northern halfway into the season. At that point I was 100 percent and it was just awesome being able to play for most of my senior year.”

Junior Madison Bruno tore her ACL while she was at basketball practice, putting her out for eight to twelve months to recover from her injury. After her physical therapy, she went on to play field hockey. The field hockey team won States this year and Madison played a huge role in the team’s success. She was one of the main scorers on the team all season and in the State Championship game, she made both of the team’s goals. Her first goal was the only goal that was scored during the game; it tied the game 1-1 and sent them to overtime. Her second goal on the night was the game-winning goal.

“It felt unreal to score the game-winning goal in the championship,” Madison said. “I didn’t process it until everyone was just running out together. It felt really good to just secure what our team has been trying to do all season.”