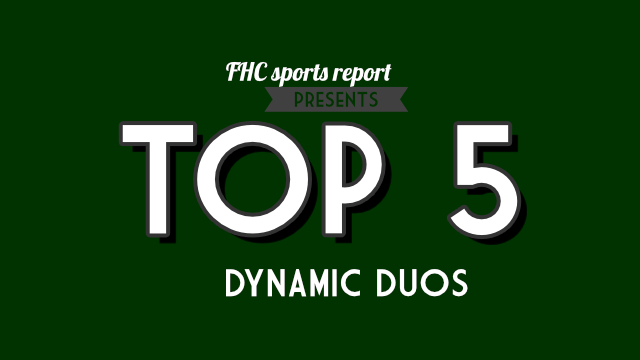 Junior quarterback and wide receiver duo Tate Hallock and Luke Majick led the Rangers to one of the best years in school history. The Rangers were 9-0 in the regular season, before getting beat by Livonia Franklin in the state quarterfinals to end their remarkable run. Going into the year there was a lot of controversy at the quarterback position until Luke earned the starting spot after the second game. Luke and senior Jace Thornton split time in the first two games, but Luke’s big plays down the stretch against West Ottawa in game two gave him the job. Luke, who is committed to Division 1 Furman for lacrosse, is a true dual-threat Quarterback. He is shifty with his feet, and accurate through the air. Tate was up last year on varsity for playoffs as a special teams member and showed that he is quite the athlete. He also plays lacrosse as well as basketball, showing his versatility as one of the few 3-sport athletes left. Although he is solid in all three sports, he is a stand-out football player. Racking up 9 division 1 offers in the past few months. Tate is known for his big-play ability as a Wide Receiver, but also a big hitter at Safety. Defensively he had 81 tackles, 3 interceptions, and 3 touchdowns. He has to be one of the fastest players to put on the Ranger uniform and runs away from his defenders with ease. The pair combined for 779 receiving and passing yards and 9 touchdowns.

Four-year senior varsity wrestlers Keegan Moore and Isaac Torrey have a combined 256 wins in their careers; 133 wins for Isaac and 123 for Keegan. Keegan and Isaac have propelled coach Brad Anderson and the Ranger wrestling team with many accomplishments over the past four years. They were 2-time team district champs in their 4 years. Isaac was a 2-time conference champ, 2-time individual district champ, regional, 2-time state qualifier, and a 3rd place finish at states. Isaac also spent time last summer at a 28-day intensive wrestling camp called JROB. He said it helped his mental toughness more than anything.

“The camp teaches you that no matter how tired you are in a situation your body can get you through it,” Isaac said. “It makes you focus on blocking out the voice in your head that is telling you that you can’t.”

Keegan did not attend the JROB camp but put in a lot of offseason work himself working on his body. Both he and Isaac have only gotten better over the last few years and will be remembered as the lead horses of the program. Not only did they bring wins but great leadership and work ethic as well. These two have paved the way for the younger generations of Ranger wrestlers.

Junior three-year varsity hooper Claire Baguley and senior four-year varsity hooper Madi Winter made quite the duo in the Rangers back-court this winter. Madi jumped into a big role as a freshman starting on a team with star point-guard Jessica Fuller, who paved the way for her. In Claire’s freshman year, she got to play behind both Madi and Jessica. Madi has been selected all-conference twice while being a part of successful teams. In her freshman year, she started for the Ranger team that made it to the quarterfinals. Claire has lead the team in scoring the last two seasons and was selected all-conference both seasons. She will be back next year for her third year on varsity and will look to run the show once again. The duo leads the team in steals and points, rounding out both sides of the floor. A lot of the Rangers production comes from the back-court, along with senior center Emma Yoder. The Rangers finished second in the conference after having a much improved second round of conference play. In districts, they ran into a tough East Grand Rapids team with division 1 talent ending their season. Madi will graduate and does not plan on continuing her basketball career. Claire will most likely play basketball in college or will at least have the option to.

This is a duo that has a lot of winning to back up their names. Senior NC State commit Felicity Buchmaier has broken multiple records in her 4-year varsity career. Felicity is a 5-time state champion at two events in her career; she has been a champion for 100 butterflies for three straight years and 100-backstroke in the last two years. Jessica Schellenboom is a junior who has spent all three of her years on varsity swim and has already made a name for herself. Jessica broke the record for 100-yard breaststroke in the state finals and also came 4th in a relay and 200 IM. Jessica’s school record was not quite enough to win the state title, as she came just fractions behind the leader in the breaststroke. The girls swim and dive team had an impressive season after losing longtime coach Tim Jasperse this season. They finished second in the conference behind East Grand Rapids. Jessica will be back for her senior year and Felicity will be off to North Carolina next season. The last three years they have established themselves as a dynamic duo for one of the most consistent programs in the school.

Varsity tennis has had four of the best years in school history in the past four years. Doubles partners Aidan and Jacob have four combined state titles individually and three as a team. Jacob has spent all four years on varsity, while Aidan has spent his last three. Jacob has the most wins by an individual in school history. Jacob played 4-singles his first two years on varsity, winning back-to-back state titles. In his junior year, he made the jump to 2-singles and lost in the semi-finals to Midland Dow. In his senior season, he switched to 1-doubles to play with Aidan, who has always played doubles. Aidan played 3-doubles his first year and won the state title, before moving to 2-doubles his next two years and winning one of two state titles. In their senior season, two of the best tennis players in school history teamed up to form a 1-doubles team with quite the resume. The pair went 30-9 overall and lost in the state semifinals to Okemos. This senior class for tennis will go down as one of the best in Ranger Tennis history. Arguably the best player to ever run through the program, Connor Genshaw, took over the state with a 1-singles title. Overall, the team finished 4th in the state.

“To be able to end my career playing alongside one of my best friends was special,” Aidan said. “We came up a little short in the end, but it was a ride.”