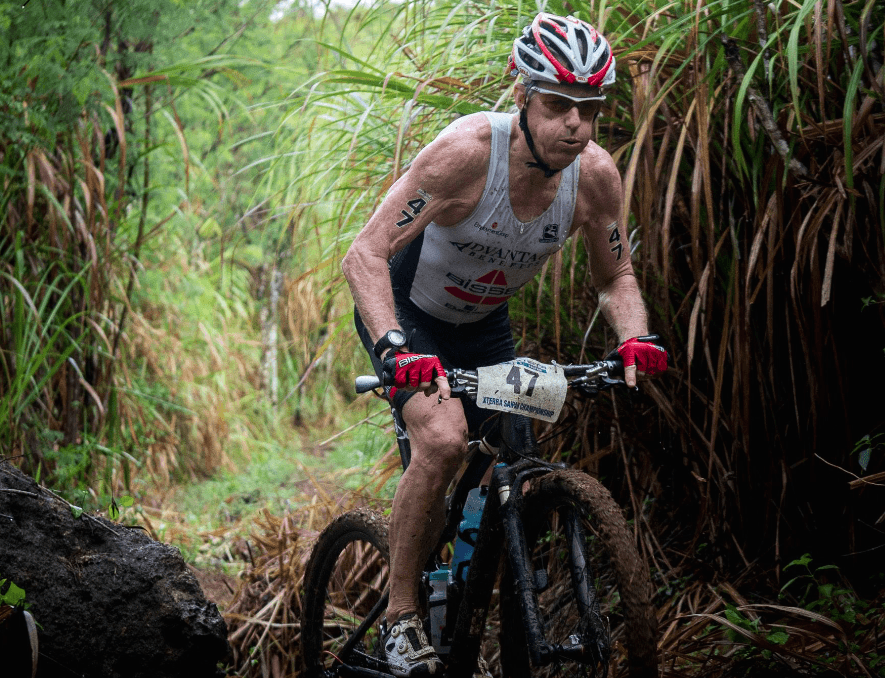 Not many can say that say that they have the endurance to swim one mile in the open ocean, bike nineteen miles through the jungle, climb 3,800 feet, run six miles through the jungle, and finish up with 1,200 more feet of climbing. Very few can also add that they have won the US Triathlon Cross Championship to become the National Triathlon Champion for men aged 60-64 and take third at the World Championship.

FHC ski coach Alan Moore has just finished his 5th season competing in triathlons at age 66. His friends and family can account for his determination and discipline, and his competitions are substantial evidence of the value he places on physical education. Allison Moore, daughter of Alan, began competing in triathlons when he began as well and runs in many of the triathlons that he does.

“We both started competing in triathlons at the same time and compete together in almost all of our races during the triathlon season,” Allison said. “I love that I get to compete and training with my dad. Since moving away from Michigan, triathlons have given us a chance to travel and spend time together. Triathlons have also given us the chance to bike, run and visit places that very few have an opportunity to experience.”

Competitions have taken him not only to places locally, but also nationally in Alabama, Utah, Hawaii and Saipan Island, and globally in Guam, Germany, Netherlands, and the Czech Republic. Next season, he plans on competing in Greece and at the ITU World Cross Championship in Australia. Moore’s friend GL Brown is the one to thank for convincing him to compete in his first triathlon. Brown has been competing in them since 1998, and when they met around eight years ago, Brown knew that Moore had what it took to win, thought he would be a “natural” for off-road triathlons and they’ve been competing together ever since.

“A winning triathlete competitor requires three things: mental, physical and nutritional,” Brown said. “Alan has it all, he understands what it takes, his experience as a Captain on a passenger jet liner serves him well, balancing all balls!”

While he has traveled all over the world, his first competition in Saipan was an area Moore was familiar with. He had spent time there in the Navy as a Captain of a passenger jet line and later his work for an airline. Moore later took a job working for Forest Hills Central, his high school alma mater and is beginning his 26th year teaching the FHC ski team.

“My daughter Allison [is] also a Central Graduate and the first ski Coach for Forest Hills Eastern does Cross Triathlons with me,” Alan said. “I believe setting a good example helps the team work harder during dry land knowing it will help them when we move into racing part of our season.”

According to Allison Moore, her father’s determination and competitiveness has instilled a value of fitness in her and his other three children, much like the athletes that he coaches. He also mentors athletes for cycling as well as skiing.

“My dad is an amazing athlete and loves being athletic,” Allison Moore said. “He started coaching at FHC when I was a freshman and has continued to coach long after all four of us have graduated. I feel this shows his love of ski racing and competing. He also enjoys getting pass on his knowledge and experience with a whole new generation of athletes.”

While triathlons require training year-round, Alan takes time off during the winter to ski in addition to workouts throughout the week. His workout routine typically consists of biking four or more days a week, both road and mountain biking, and swimming and running three days a week. Occasionally he does what is called a “brick workout” with both biking and running. The length and difficulty of his workouts depend on when his next race is.

Whether you’re speaking to Alan Moore’s friends, family, or athletes he has mentored, his optimism, dedication, and kindness to others is sure to be mentioned. Moore’s selflessness to help others and leadership by example leaves a lasting legacy that is sure to influence the next generation of athletes to aspire for greatness.

“He is probably one of the nicest people you will ever meet and can talk to just about anyone. He loves being on a team and getting spend time with his family, friends and teammates,” Allison Moore said. “[Alan] sets a good example for his athletes. His knowledge and love for the sport shines through when he works with the athletes he coaches. He also plays by the rules and values sportsmanship, which are very important for all athletes to learn.”