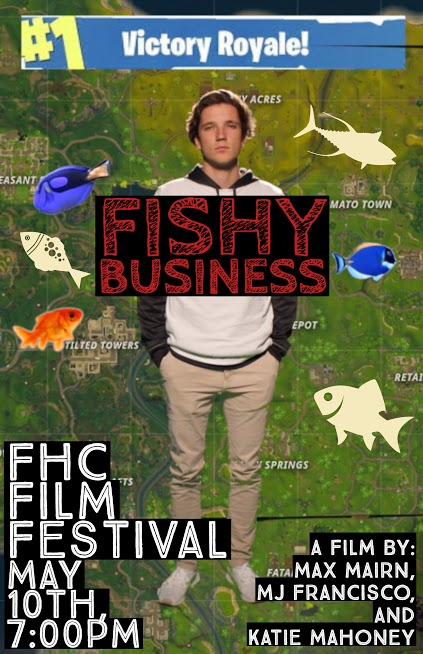 “Our film is about a college student, Max, who gets left home alone while his roommates go out of town on a trip. Max has never really had to do anything for himself before, and when he is faced with this problem, he encounters many issues.”

“The theme of our film is persistence when overcoming challenges.”

“We kind of changed our film as we started filming and editing. Originally, we were trying to remake a modern-day Home Alone, which there are certain aspects of our film that still reflect that. We based our changes around the fish because we knew we wanted to incorporate that somehow into our film.”

“The filming process was kind of hard because we were all super busy with sports and other things and it was hard to find time when we could all get together and film. The editing process was a little easier, but it also was challenging when trying to put different scenes together and make the movie flow.”

“We chose Max to act in our film because we thought it would be easiest and most reliable if we had someone in our group act, just so we knew we could count on him being there each time we filmed.”

“I think my favorite part about the creative process was being able to change scenes and add new aspects to our film as we went along. Some of the scenes that we included in our final film were not written in our script and were just made up on the spot when we were in the filming process.”

“We are trying to convey that if someone really wants to make a change and make things right, hard work and dedication can pay off.”

“The audience can expect to see our messages conveyed through Max’s dialogue and actions and even laugh a little bit at some of the scenes.”

“Our film is different from the rest because it only stars one person, and it does not really have too many speaking lines, so the action scenes move the plot along rather than dialogue.”