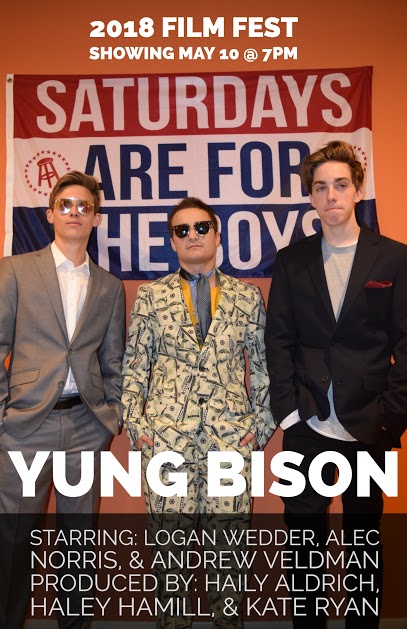 “Our film is about two best friends who want to have a rapping career together. They upload a video of them rapping as a duo, and they catch a big break with a big-time producer (AJ Producer). When only one friend is offered the record deal, he must make a choice: friendship or fame and fortune?”

“The theme of our film is knowing when to understand the difference between following your dreams and accomplishing your goals versus using people to get your way to the top. Also, an underlying theme would be that friendships and people are more important than money and fame.”
3. What was the inspiration for the film?
“We were inspired by the modern rap music and lifestyle of a rapper. We wanted to incorporate great rap music that everyone would love and put a story behind it.”
4. Can you describe the filming/editing process?
“Filming was a difficult task to complete because we had many actors with different schedules, and it can be hard for non-professionals to remember lines and get it right every time. Editing is always fun because you have complete control over how the shots come onto the screen. We incorporated a lot of different songs and transitions to make our movie more entertaining.”
5. How did you choose the actors/actresses?
“We chose our friends to act in our film because we knew it would be fun if we were all together doing it, and we know them well and their schedules most of the time.”
6. What was your favorite part of the creative process?
“My favorite part was choosing the music for the film because you have so much freedom to change the mood of a scene when the right music is featured in it.”
7. What messages are you trying to convey?
“The message we are trying to convey is that no matter what happens in life, the people around you and your friends are always going to have your back, and that is who you have to turn to and rely on.”
8. What can your audience expect to get out of the film?
“Our audience can expect to have a good laugh in certain scenes and hopefully be impressed by the skill of our actors and actresses to play their part and convey a storyline. Overall they can expect to be entertained for the whole duration of the film.”
9. How is your film different from the rest?
“Our film is different because there is no other film about the music industry, friendships, and how they can be torn apart because of it. Our film also features original and freestyle raps by our lead actors– who are also peers of the FHC students.”