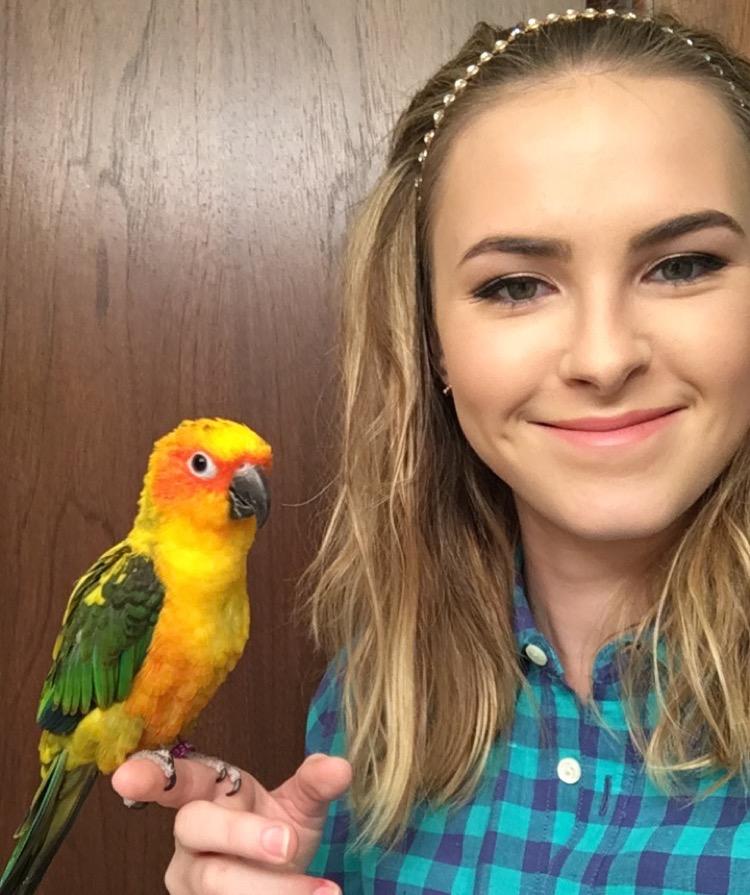 Hope is a Thing With Feathers

Emily Dickinson once said, “Hope is a thing with feathers that perches in the soul,” but for me, it was a sun conure perched in a cage next to my room’s window. His name is Vin Diesel, and he’s the best decision I’ve made in my life. I don’t know that much about where he came from, or what he was doing for twelve years in Florida before he somehow made his way to Grand Rapids where I found him, but I’m thankful for however we ended up together.

Before I start, let me explain something. I think birds in general are a very misunderstood pet; I get asked all the time “Does he have a personality?” to which I usually respond “He has more personality than most people that I know.” This usually raises some eyebrows and doubtful looks; most people can’t imagine how a bird could possibly express emotions. This really peeves me because other, larger animals, like dogs and cats, are automatically assumed as having them. Most of where that came from, I think, is the fact that there are still wild birds, and more common pets are all domesticated. When we think of birds, we think of the ones in our trees outside before we think of pet birds, which makes us dehumanize them.

The day I went into Casa La Parrot, I never planned on taking a bird home. But Vin was the only bird there that instantly seemed comfortable perched on my finger. He was different from all the other birds; he was like a ray of sunshine, from his bright yellow body to the tip of his deep orange head. I can’t imagine what life would be like for him, to live in a cage his whole life as me and my family constantly came in and out of the house, leaving him alone in his cage for most of the day. Still, no matter how long I’ve been gone all day, Vin always knows when I walk in my front door and starts squawking because of how excited he is that I’m home.

It’s nice that someone’s excited to see me every day, even if it’s a bird that can’t speak. Words are not the only way to express how you feel, and people are not the only living things that need love. I have hope because when he’s perched in my room, I’m reminded that it’s not about how high you can fly, for him literally and for me figuratively, but about being around those who appreciate your presence. He lives in a small world around humans who are giants to him, and still lets out a loud squawk whenever he doesn’t like whatever you’re doing and will bite you hard. He may be small, but there is no question that he’s mighty in the face of mistreatment.

I have hope because Vin Diesel reminds me that no matter how much it seems like your voice doesn’t matter, you can change that. In a world so large, it seems like nothing you do matters. The solution? Make it matter. Make your voice heard, build yourself to be larger than you are, and make what you stand for known to others. Because people may clip your wings, or make you think that you’re less than you are, but the only one that can stop you from being as good as you can be is yourself.