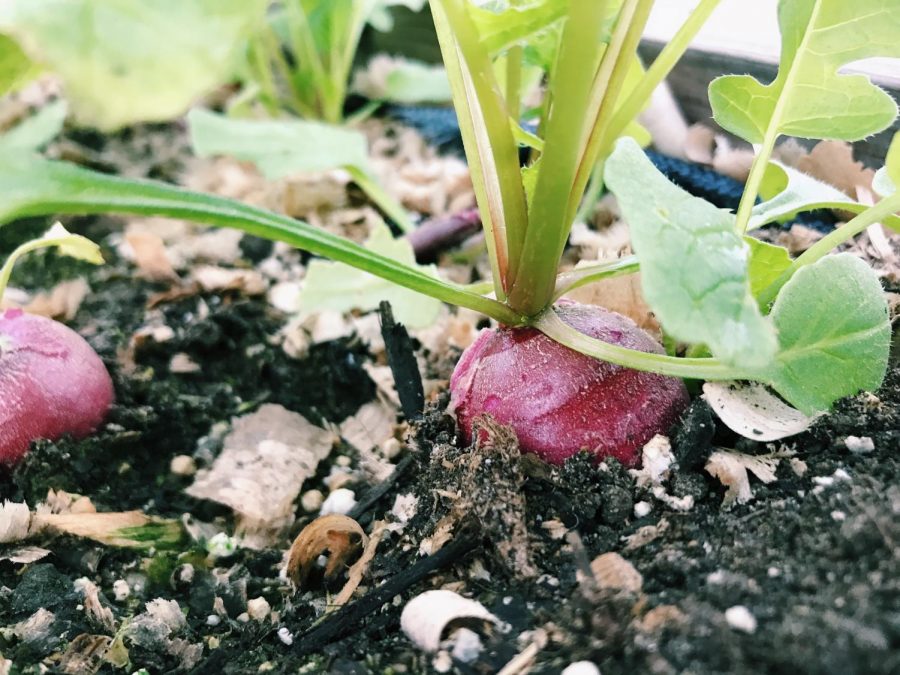 While most of the other students had busy weeks, I had a relatively calm schedule in the greenhouse. Between tackling the irrigation system inside the greenhouse and managing other watering of the plants, I have begun to fall into a rhythm with my work. Because the watering inside the greenhouse was new to me, I ran into a couple of problems of my own making, but none were too extreme. I did notice when I was inspecting the boxes that a thin layer of algae was covering the topsoil, and in response to that growing problem, I tossed the soil to rearrange and loosen it up.

Other than watering, I also tied up the snap pea plants more this week, going through at least another two spools of spring in the process. On our short half-day on Friday, I also moved the flats of herbs, radishes, and some other plants over from the ceramics room across the art department to make counter space for upcoming art projects.

This week was very exciting. Because the boxes are full right now, these past few weeks we have not been able to plant and have mainly focused our attention on the landscaping project. We finally finished up the front on Monday by adding the last few flowers. Now, we are just hoping and praying that when we transferred the wildflowers, we got enough of the roots so that they will grow bigger and better in the spring. This week we also got to transfer the kale we planted a few weeks ago into some of the boxes. The kale is growing very quickly, and since we still had openings all over the greenhouse, we ended up planting almost a whole flat into many different boxes. We also picked up the compost and dumped it in the new bin that Mrs. O’Brien gave us. After we add the compost, we have to add half as much water and twice as much sawdust.

Later in the week, we filled up some old yogurt containers with our new soil mix to prep for when we move our herbs into the greenhouse. Up until now, we have been keeping some of our flats of plants (herbs and flowers) in the ceramics room. The art class now needs their counter space back, which is understandable, but it means we had to move our flats and lights. The art classes are kindly allowing us to use the counters in another studio in the art room. In the morning, Susannah moved the flats over to the new area, and in the afternoon, I had to move the lights. It was definitely not easy, however. One of the lights was very heavy, and I was terrified that I was about to break it. The other one I just unclipped the lights to make it easier to move; it was a lot less stressful. I am very excited about this coming week because the radishes are just about finished growing, it should be fun.

This week in the greenhouse has been nothing short of great. The floral landscape we’ve been working so hard on was finally completed this Tuesday. It’s going to be amazing to see the perennial plants grow back in the spring. Besides working hard on planting outside, we also tied up more pea plants, so they can grow along the string. They are almost all tied, and some are getting super long. We will be able to snack on them before we know it! Not only are the pea plants growing so quickly but the radishes and leafy greens are as well. Where there is room between the surviving plants, we have been interplanting kale in the boxes this week. Since all of the empty spaces in the boxes are now full, we have been working on preparing the potting soil and distributing it into yogurt containers, where we will continue the growth of the plants remaining in our flats. We will soon transfer the plants to the boxes once our first round of greens is ready to be harvested.

Besides working with the plants this week, we gathered the compost from the lunchroom and dumped it in the compost pile. Thanks to Mrs. O’Brien, we now have a new composting bin. This week, we added a couple of steps to our composting routine to help the decomposition process. Rather than simply dumping all of the compost into the bin and letting it be, we are starting to layer it with wood shavings, compostable matter, and water. I can’t wait to see the difference it will make.

We finished the planting portion of our landscape project this week. We planted the grasses and flowers lining the greenhouse entry just in time for the cold weather to arrive. We are still working outside to create a sign for the greenhouse, but we are happy to have completed the gardening aspect.

On Tuesday, we used the kale we had grown the ceramics room to fill in empty spaces in the greenhouse. We were able to use up almost an entire flat of kale to replace plants that died or didn’t grow.

Maria, Kara, and I also spent time emptying old containers of soil into a large container so we could mix the contents. Then, we refilled the containers with the soil, so next week, we can plant herbs in them. We will use these containers as pots, so we can grow and maintain our herbs as the weather gets colder.

Due to Friday being a half day, we picked up the compost on Friday. We just received a new compost bin from Mrs. O’Brien and added to it for the first time this week. We deposited the scraps from the lunchroom, half a bucket of water, and several scoops of sawdust to aid the decomposition process. This week, we made progress in several aspects of greenhouse maintenance and planting, and I can’t wait to see what next week brings.