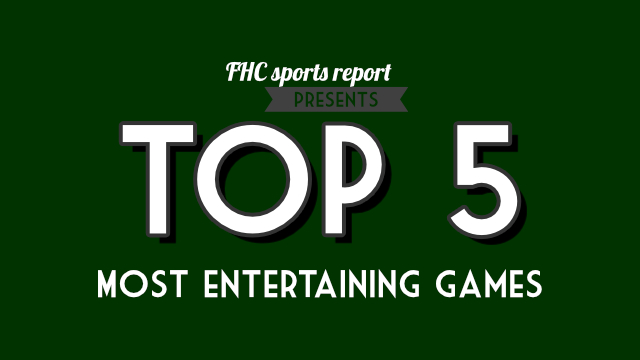 The JV boys tennis team made many memorable moments this past season, and the most memorable would arguably be the most entertaining game against the Wildcats of Northview. The game was very intense and rather back and forth; however, the Rangers came out on top winning 6-4. Sophomore Sam Cooper and his doubles partner Tommy Laidlaw got a big win during the first round of games 8-3, which ended up being the largest winning margin of the day. The team owed the win to the freshman; five out of six wins consisted of all-freshman teams. Sophomore Leo Treash was also a big part of the team, assisting by winning a few more matches.

“It was a tough match overall,” Leo said. “Our serves were working, but they were killing us at the net.”

The football team’s season was filled with close games. After coming off of a devastating one-point loss to West Ottawa, the Rangers took on the Grandville Bulldogs. The Bulldogs jumped out to a massive 30-7 lead, only to see it completely erased. Down 37-30 with just under 2 minutes to go, senior quarterback Luke Majick threw the ball up to junior wideout Jimmy Schollercc who made a phenomenal catch for the touchdown. The Rangers then attempted to go for 2 to take the lead, but senior Tate Hallock was stopped short and the Bulldogs would hang on to win 37-36.

“[It was] very frustrating to lose like that in back-to-back weeks,” Jimmy said. “They were two good teams but we should have won those games, so it was tough for our team.”

The JV football team entered this rivalry showdown with a must-win mentality. The Rangers were 0-3 and really needed a win. The game went back and forth with both of the teams not being able to stop the other. The combination on the ground of quarterback Carson Mocherman and running back Sawyer Bosch was lethal all game long. The Rangers had a 26-18 lead until the Huskies were able to tie it up with two and a half minutes remaining. With just under two minutes left in a tie game, Carson dropped back and made a perfect throw to receiver Evan Van Artsen who did the rest to give the Rangers the lead of 34-26 for the game.

“[That game] was huge,” Evan said. “It turned our season around for sure. Not beating those guys for a couple of years and finally doing it again was awesome.”

The Varsity Soccer team had a very rough start to the season but ended up coming back to prove themselves. The Rangers couldn’t quite find the connection they needed to win games early on, but finally found it against a strong EGR team. After two straight wins, the boys were hungry for a third. This time, against the Pioneers. Junior Sammy Postlewait started the game with some energy, scoring the first of the night early on. Halfway through the game, the Ranger defense broke down and allowed one more goal in to tie it up 1-1. Finally, Senior Reese Walli buried the final goal of the night ending the game 2-1. This was a big momentum push for the team and was undoubtedly one of the most exciting games of the season.

The freshman volleyball team ended the season with an impressive 12-0 record. The team blew many teams out but also struggled with a few. One of those teams was the Red Arrows of Lowell; they were definitely the hardest matchup they would partake in all year. The final score was 2-1 for the Rangers, which was rather unusual for them because they’re used to beating teams in 2 matches, not 3. The girls won the first set, lost the second, and persevered through the third confirming their victory.