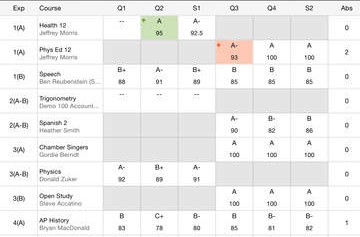 Little Boxes of Red and Green

Little red and green boxes scattered across a grid ultimately determine the self worth of an individual. Although it may be both depressing and painful to admit this, unfortunately, it is the harsh actualities of reality. A recent update to the Pearson Powerschool app near the beginning of the school year provoked chatter among each classroom as students feverishly whipped out their iPhones and updated the “trendy, new” application; something that was previously considered a tool used to monitor educational progress had suddenly experienced a metamorphosis into something merely utilized for entertainment. It had suddenly transformed from an educational gadget to a modern-day accessory.

The Powerschool app had so much potential. It relied on a general theme of black-and-white, simply showing letters and percents. Now, however, it displays a checkered screen, one that uses colors to illustrate when a student’s grade is rising or falling. When a student opens Powerschool and is instantaneously greeted with an array of tiny red boxes, they can not help but feel a sense of disappointment wash over them. It is like being handed back a test and seeing nothing but seemingly innocuous red pen marks sprinkled across a paper. These red and green boxes Powerschool relies on do not possess the ability to tell the whole story. They merely tell the story of failure vs. improvement. They cause a student to feel bad about themselves for being absent from school for a week due to pneumonia by demonstrating a screen brimming with crimson as opposed to telling them to simply “feel better.”  They cause a student to feel bad about themselves by showcasing a box full of red even when that student’s Pre-Calculus grade dropped by one percent as opposed to telling them “congrats on maintaining your A despite that difficult midterm.” The moral of the story is simple; if an individual has a grade in class that slightly fluctuates, they should not be greeted with bright red when it simply dips from a 97% to a 96%.

It is as if the app is constantly shouting “try harder” in a condescending manner. It is as if, in today’s competitive society, students do not get that enough already from both their teachers and parents. This recent change to the app is rather discouraging, and as opposed to aiding students in wanting to independently monitor their own progress, it simply makes them want to delete the intimidating app and power down their devices. The updated app itself promotes embarrassment; if an individual is sitting in the middle of math class tucked away at his desk, he not going to want to check his grades if his table partner can see the sea of red little boxes greeting him.

It is evident that Pearson development was merely trying to keep up with our revamped generation; they were more concerned with providing a “modern, fresh” update for the application that they forgot Powerschool itself is not Instagram but merely an app that allows students to monitor their grades. It is clear that somewhere along the lines, they lost sight of what truly is important. At the end of the day, it is not about how many users download the app but rather if the app accomplishes what it is primarily intended to do. Although yes, the app is prettier, it’s overall function has decreased considerably.

This updated version inevitably raises the fundamental question of “am I good enough?” A recent installment on the application along with the color coded boxes allows students to scroll up and be greeted with a rambunctious round of applause depending on their GPA. Who are they to determine what GPA is acceptable? Who are they to determine what GPA deserves a few claps and what GPA deserves silence? It is undeniable that an individual’s self confidence will be dramatically affected when they scroll up expecting rowdy cheers and they are instead greeted with nothing in return, merely silence.

Today’s society is so focused on churning out intellectual robots that we have resorted to letting correction marks on papers define who we are as people. We have taught the future leaders of our generation that Bs aren’t “good enough”; in an era where Cs were previously considered “average”, we have now shifted our mindset and deemed them unacceptable, convincing individuals that Cs demonstrate failure. Our generation is currently trapped on a revolving hamster wheel that they can not seem to find their way off of, and Powerschool is simply prolonging the vicious cycle. The app teaches students to compare their screens in an attempt to “out-do” one another; the app teaches students that when a grade drops .5%, they deserve a little red box in return. The app has ultimately allowed the sound of applause and an array of little green and scarlet boxes to determine student’s self-worth, and this is not okay.