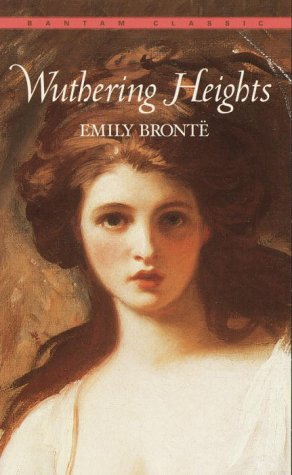 Wuthering Heights: Worth the Trouble

"Whatever souls are made of, his and mine are the same."

As far as required readings go, Wuthering Heights was low on my list of ones to look forward to. Sure, I love romances, which the book is, but I couldn’t process the idea that I might actually enjoy something set so long ago (late 1700’s – early 1800’s). Not to mention the copious negative reviews given by former AP Lit alums, who almost all deemed the book and the actions of characters within its pages “frustrating.” However, an assignment is an assignment, so I read page after page of the small, pink novel. At first I read reluctantly; but, surprisingly, that reluctance turned to hesitant enthusiasm, and then real excitement. The story’s complexity, passion, and alluring characters make it a true classic and a must-read for any person with eyes to do so.

Right from the beginning, Wuthering Heights’ style of narration sets it apart from other stories. As the story opens, a man named Lockwood is entering Wuthering Heights in hopes of renting its counterpart, Thrushcross Grange. After meeting the owner and his household, Lockwood journeys to the nearby house of Nelly, a former maid for Wuthering Heights. As he asks her about her story, the majority of the tale is told by her as a third party in past events. Only at the end of this long and complicated story do we get to see the present day again, and see how the characters have finished their respective journeys. The story is split in terms of setting, with two houses about four miles apart from each other providing the backdrops of the story. One is a nicer home called Thrushcross Grange, and the other a creepy old place after which the novel is named. These different settings and style of storytelling make the novel a more detailed and layered one than any old love story.

The two distinct houses, on top of being symbols in the story, provide homes for two equally distinct sets of characters. Some of these grace the earlier pages of the novel, while the others the later ones. These characters come from two generations, yet share overlapping problems and blood relations. Their only commonality is Nelly, who tended to both sets of people. The first group is led by Catherine Earnshaw and a man who simply goes by Heathcliff, who share a love for each other beyond life and death. But Catherine, who feels she needs to marry someone equal to her in social standing, instead chooses Edgar Linton, sending Heathcliff into a tailspin and setting off the events for the rest of the novel. Heathcliff’s need for revenge against Catherine affects the second set of characters as well, including her Catherine Linton, Heathcliff’s son Linton, and their houseboy Hareton Earnshaw. As the separate generations deal with the consequences of Catherine Earnshaw and Heathcliff’s actions, each character deals with their own struggles and debates the powers of life vs. death and love vs. revenge.

Because the story is a common one among high school and college campuses, it gets kind of a bad rep in being associated with all of the “joys” of annotating and analyzing. However, it truly is a classic for a reason. There could be entire semester-long classes devoted to the symbolism seen in Wuthering Heights, and delving into them is something that I found kind of exciting after getting into the book. I will say that there is some truth within the comments that the characters are “frustrating.” For me, I only found two characters in the book to empathize with, who were truly good people. The rest were always keeping secrets, sneaking around, and basically just screwing up. But this contributes so heavily to the plot that the story would not be itself without that. Their mistakes always provided new action, and that kept me enveloped through the end of the tale.

What really got me, however, was the romance. I’m not afraid to admit that yes, as a teenage girl, I’m a sucker for a good romance novel. But Wuthering Heights isn’t just some Nicholas Sparks book. It’s one that has already stood the test of time, and will continue to wield power for ages to come. The love between Heathcliff and Catherine is one that transcends life and death, as supernatural forces even play a role in their relationship. The revenge that Heathcliff wants to exact over Catherine for leaving him and the love that he tries to suppress because of this wage an epic battle over the course of Heathcliff’s life, even after Catherine is gone. Although it’s not the best model for a relationship, reading about such a powerful bond, you can’t help but feel their passion.

For anyone finding themselves in my position, being handed a copy of Wuthering Heights and dreading the next few weeks you have to read it, fear not. Although it may be slow going at first, it is only a matter of time before the infectious passion of WH’s characters spreads to you and you find yourself reading one of the best classic novels ever written.