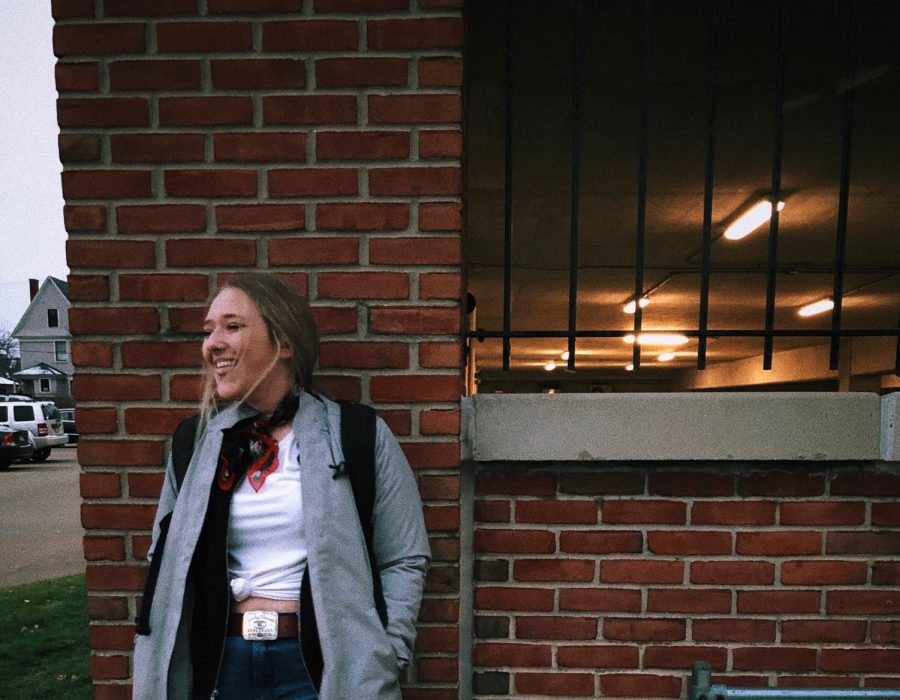 Hannah Kos makes her way towards a future of helping people

Freedom. One of the many perks granted to you when you graduate high school. For Hannah Kos, it’s one of the most noticeable and drastic differences between her life now, and her life a year ago.

“It’s so weird to think back to high school and remember having to sign out or ask to go to the bathroom,” Hannah said. “Whereas now, I have to make the conscious decision to wake up, go to school, and get my work done.”

As Hannah has found, that freedom comes with an intense responsibility. In life after high school, your actions are solely your own. It’s a fact that can be both a negative and positive.

“It’s all on me,” Hannah said, “and that can be pretty stressful, but it’s also nice because I have a lot of freedom and the ability to hold myself accountable– so once I get things done, it feels a lot more rewarding because I got through it by myself.”

However, freedom isn’t the only thing you receive when you walk out the doors of FHC for the last time. You are also given options. Roads your life could take. Of the multitude of roads available to her, Hannah opted for the less expensive but pricelessly rich in opportunity route.

“Right now I am attending GRCC to play the ‘making it out of college with minimal loans’ game,” Hannah said. “Currently, my plan is to complete next semester and take classes over the summer here ar GRCC as well. Then, granted I am accepted into the program, I hope to participate in NOLS– which is a leadership/ environmental semester abroad.”

Going a cheaper route education wise has granted Hannah the ability to participate in programs such as NOLS. Although plans are still up in the air, Hannah hopes to deepen her real-world experience by participating in this program.

“It’s a cool program because,” Hannah said, “although it isn’t through a college, you still get a full semester of college credits and get a lot of real-world experience. I’m most likely going to apply to three different trips- Fiji, India, and Patagonia- so that I have a higher chance of being accepted and because I am totally indecisive.”

Regardless of the stigma surrounding community colleges, Hannah praises it as a “good option for many students.” She also recognizes this was the right option for her because she didn’t have to take out any student loans which was “a breath of fresh air.” However, she does struggle with a lack of community at GRCC– a drastic difference from the community surrounding FHC.

“GRCC is a great option for a lot of kids,” Hannah said, “but on occasion, I do struggle with going here because there aren’t a lot of ways to get involved that revolve around my interests. In high school, I probably would have considered myself over-involved, but not in a bad way, so it’s just a pretty drastic change.”

Hannah may be taking the community college route for now, but she has big plans for when her time at GRCC is up.

“In five years, at least as of right now, I really hope I’m in law school,” Hannah said. “Throughout high school, I always said I wanted to be a teacher, particularly in an inner-city school. The reason for that being that I want to be able to help kids. However, after thinking about it and talking to some people in the system, I realized I could make much bigger changes if I went into a type of law that deals with kids. So, hopefully, I’ll go into either family law, civil law, or environmental law because that’s something that is also really important to me.”

But, no matter where Hannah is, or what she is doing, or how much freedom or responsibility she has, she wants simply for one thing: to help people.

“Really, I just want to help people,” Hannah said. “I went through so much trauma in high school, and if it wasn’t for the people that surrounded me throughout that, I wouldn’t be the person I am. Everything that happened to me really made me realize how common it is for people to go through major life events without people around them having any idea that anything is going on. And if I’m able to help with that in any way, it’s a bigger deal than people realize, and it can make a huge impact on that person’s life– even if they don’t let on at all.”