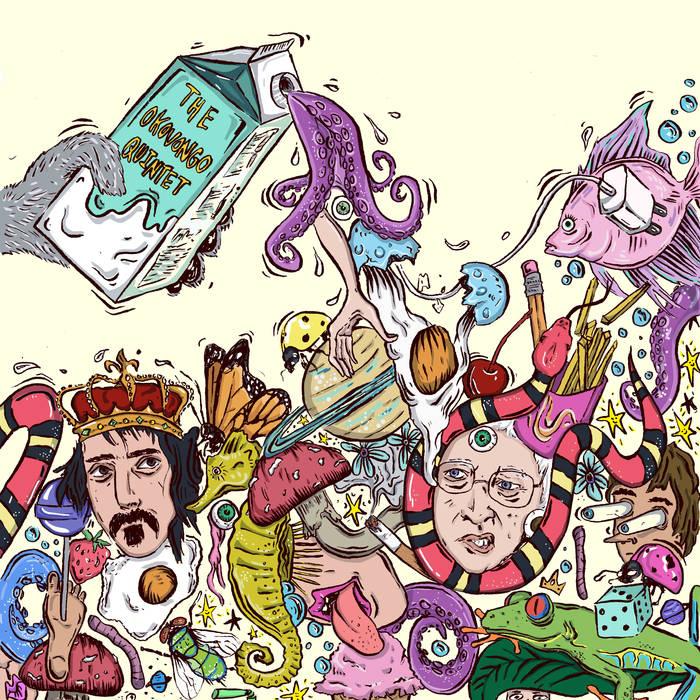 Cover artwork for “The Okovongo, Volume 1: Zoboomafoo Exacts His Revenge on PBS” was done by junior Dani Rodriguez.

Junior and Senior Team up to Release Jazz Album

Senior Geoff Brown and junior Bennett Hendricks sit at a table in the media center, grasping at musical terms in an attempt to define the fifth song on their recently-released album, The Okovongo, Volume 1: Zoboomafoo Exacts his Revenge on PBS.

“There’s a little bit of a Snarky Puppy vibe, but then, like…. Egypt?” Brown tries.

“It sounds like David Gilmore I think,” Hendricks says. “No, I don’t know. Not everybody’s parts are…”

“It kind of has a lot of different sounds to it. There is Snarky Puppy influence. Your solo gets pretty metal-y, though,” Brown replies, tossing the discussion back to Hendricks.

They mull over the idea of “phrygian dominant” for a while, then reject that too.

“That one’s maybe more of our own sound,” Hendricks finally concludes.

And what exactly is that sound?

“It’s like – what’s the right word? We should make up a genre name right now.”

“Add bebop in there too.”

The inventively amalgamated genre name represents the spontaneity of the album as a whole, which was written in one day and recorded in two. Last May, when Brown and Hendricks first hit upon the general musical idea which inspired Okovongo, they had no idea that it would eventually evolve, over the course of many months and with little organized work, into a complete six-song album. When writing and recording began this past December, it was, in Brown’s words, “just like, ‘Hey, let’s do this.’” With that attitude, one bassist, one guitarist, two percussionists, one saxophonist, and “about three notes,” Brown, Hendricks, and the rest of the “Okovongo Quintet” improvised nearly the entire album.

I watch a lot of nature documentaries and the Okovongo is this river delta in the Kalahari Desert, the south of Africa, and it fills up with water and there are hippos sometimes and it just looks really cool. It’s actually spelled Okovango, v-A-n. The Planet Earth guy, David Attenborough, who was narrating it, he’s really British, and he sounds like he’s saying Okov-O-ngo, with an O, so that’s how I thought it was spelled. Turns out it’s not but it looks cooler.”

— Geoff Brown on the album's name

“It just kind of happened,” Brown said of the album. “It is very haphazard and [was done] without much rehearsal.”

The first charts were written on December 28th, and the entire work completed on December 30th. In that three-day musical extravaganza, the group melded the lifetime experience of five young jazz musicians into that one “haphazard” album. Okovongo is available for limited free streaming or for $7 on Bandcamp, a music sharing app and website.

The skeletal outline for each piece, created in some cases on the day of recording, is just that: an outline. Very minimal “charts” set forth the basic chords for each song, and from there, improvisation took over.

“Any note that you play over a certain type of chord, it’ll make an interval with all the notes in the chord and will sound different based on the note you pick and where you place the note metrically,” Brown explained. “So [improvisation] is just kind of about constructing lines that sound nice.”

The impromptu selection of musical notes may seem intimidating to some, but Brown and Hendricks see it as an opportunity for creativity.

“It’s like the alphabet initially, learning it,” Hendricks said of improvisation. “And eventually, once you practice enough, you can just play what you hear. So you hear it and as you’re hearing it you’re playing it. … [Becoming good at improvisation] is a whole lifetime. You’re never done. It’s like a language. That’s exactly what it’s like, except that it’s fun.”

The art of improvisation is a complicated one that neither Hendricks nor Brown claim to have mastered. The improvisation which drives the album comes largely from Alain Sullivan, a senior at Catholic Central who played saxophone on the album. Hendricks and Brown speak highly of both Sullivan and Sean Perlmutter, the group’s drummer, who is a freshman at Wayne State University.

“They’re using us, and we’re using them,” Hendricks said of the somewhat symbiotic relationship between the musicians. Perlmutter and Sullivan, whom Brown predicts will both go on to become professional musicians, get practice becoming “easy to play with,” while Brown and Hendricks get to improve their own skills by playing with such talented musicians.

“The general rule is surround yourself with people who are better than you, so you’ll improve,” Hendricks said.

“You learn a lot when you’re not the best musician,” he said.

Roles are reversed in zero hour jazz band, where Brown and Hendricks bring a uniquely high level of experience and passion for jazz to the group. The class is open to all interested musicians and meets every day in the orchestra room to work on a variety of jazz-related skills. It is the high skill level necessary to be successful in jazz which initially drew both Brown and Hendricks to the genre.

Brown’s conversion from a metal fan to a jazz fan occurred his sophomore year at an Animals as Leaders concert where CHON (a “borderline jazz” group) opened and piqued his interest in the genre. Since discovering jazz, both he and Hendricks have come to appreciate the “higher level of musicianship” that it entails.

Brown elaborated on that art form, tag-teaming with Hendricks to provide a sort of musical timeline of jazz which he says “may or may not” be completely accurate.

“[Jazz] is similar [to classical] in that musical virtuosity is highly praised,” Brown said. “[Initially], it was just people playing what they wanted to hear. And then in the 50s and 60s, that evolved into bop and stuff. … Later on, [other musicians] started putting more emphasis on the soloing part and started really pushing it to a higher level, studying music theory and studying the relationship between chords and what jazz people were doing. … There is a mathematical background to it.”

Combining what they have learned both in school and from listening to other artists has allowed Brown and Hendricks to expand their interest in music beyond the classroom and play a small part in the Grand Rapids jazz scene. (This scene, says Hendricks, is somewhat nonexistent. Jazz is much bigger in Kalamazoo and Detroit.)

Mitch Maier, a current Western Michigan freshman and 2015 FHC graduate who contributed his percussion skills as part of the Okovongo Quintet, emphasized the importance of this expansion.

“You learn a lot from high school band,” Maier said. “But once you get outside of that and have to have your own style and own vocabulary of what you can play, playing with other people and doing new things is a great way to expand that vocabulary.”

Though Maier, Brown, and Hendricks have previously played together at Kentwoodpalooza, a small concert series put on by the Kentwood Public Library, this was the first major project they all worked on.

“It was an honor to be a part of it and play with such talented musicians,” Maier said. “Geoff and Bennett did an outstanding job with all of the writing. Recording a six-song work in two days was crazy, but with the guys we were playing with all we had to do was just play and the final product turned out amazing I think.”

As far as the future of the Okovongo Quintet goes, things are up in the air. In the spirit of their debut album, the quintet is going to improvise its next move.

“It could be an annual Christmas thing,” Brown suggests. “And then we could listen to them and see how we’ve progressed.”

Hendricks thinks the proposition over.

“That’d be fun,” he agrees. True to the ever-improving musicianship prized by jazz fans, however, Hendricks already has his sights on the next album.

“I don’t listen to [this album],” Hendricks admitted. “I think we’re going to do another album and I could see it being even better and more put together. I think I’d listen to that.”

To listen to “The Okovongo, Volume 1: Zoboomafoo Exacts his Revenge on PBS” (and to catch possible other releases by The Okovongo Quintet), readers can search for the album name on Bandcamp.com. Brown and Hendricks recommend starting with the third song, “Partido Alto ad Nauseam.”